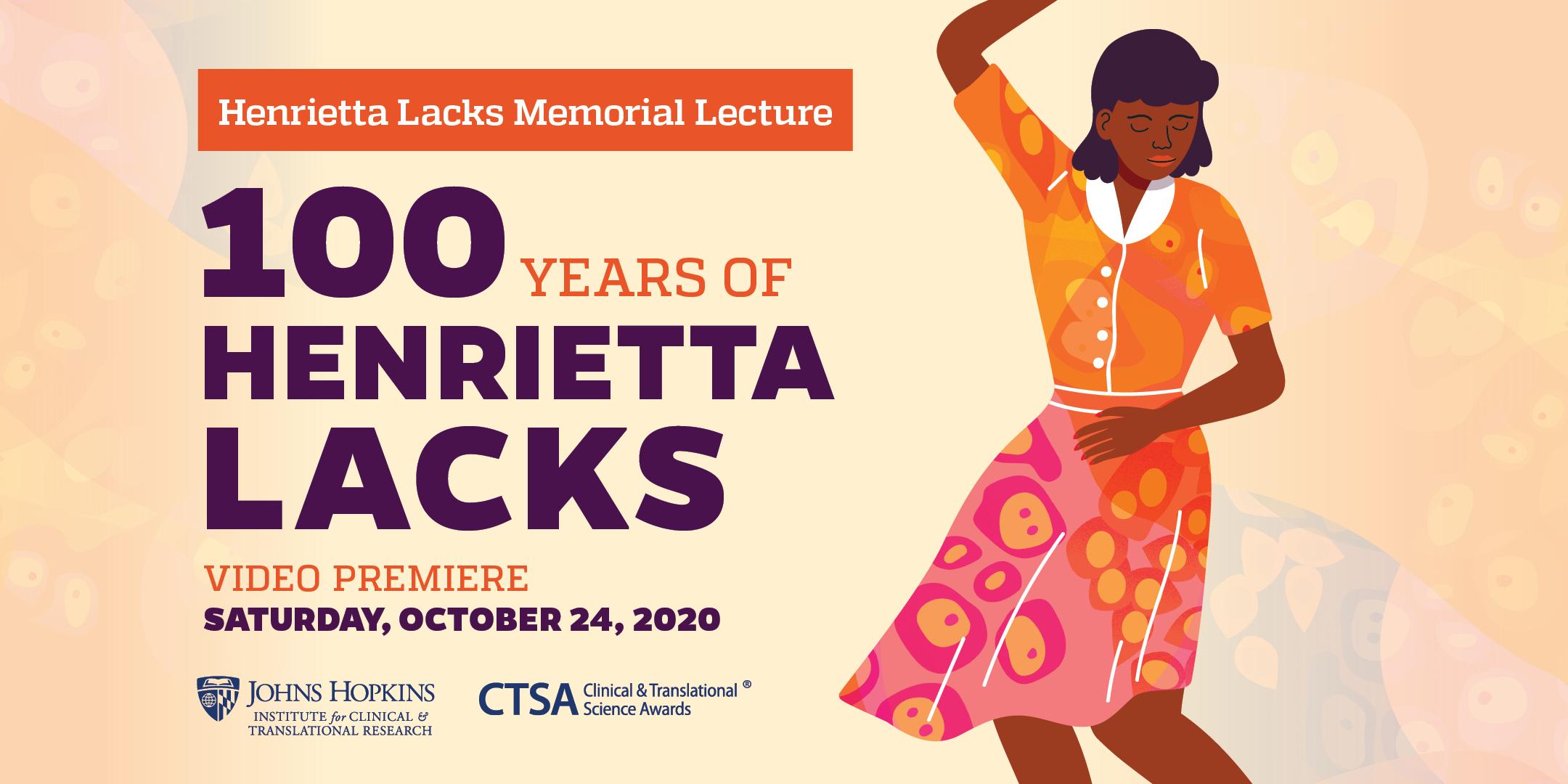 The annual symposium is an opportunity for people to have a better understanding of Henrietta Lacks and the HeLa cells.

Due to the COVID-19 pandemic, this was the first year that the annual Henrietta Lacks Symposium was held virtually. The special one-hour video screening featured the Lacks family, researchers and community members, who discussed the impact of Henrietta Lacks and her immortal HeLa cells in the past, present and future.

“This is a special year. It would have been my grandmother’s 100th birthday,” says Henrietta Lacks’ grandson David Lacks. “This is an opportunity for people to have a better understanding of Henrietta Lacks and the HeLa cells. They’ll get to know the science and the woman behind it.”

Daniel Ford, M.D., M.P.H., director of Johns Hopkins Institute for Clinical and Translational Research, says the video highlights the continuing value of HeLa cells, both in Gregg Semenza’s work and in studying COVID-19.

“The Henrietta Lacks Symposium is an important way for us to talk about how the research community and broader community work together,” Ford says. “We have seen the sensitivity around those issues come to the fore this past year. We understand that we need both groups to work together to make progress.”

The video is a celebration of Mrs. Lacks’ life, says Cyd Lacanienta, associate director for stakeholder engagement for the Institute for Clinical and Translational Research, which produced the video.

“We want to celebrate the life of a remarkable woman,” Lacanienta says. “The video moves from the story of Mrs. Lacks’ life as told by her family to highlighting the extraordinary accomplishments in research, including the work of 2019 Nobel prize winner Gregg Semenza.”

Gregg Semenza, M.D., Ph.D., C. Michael Armstrong Professor of Genetic Medicine in the Johns Hopkins University School of Medicine and 2019 Nobel Prize laureate, talks about his use of HeLa cells in his prize-winning research.

“Unlike most cell lines, HeLa cells can be grown in suspension culture (floating in a flask) rather than stuck to the bottom of a petri dish, so we could grow the cells in very large volumes,” Semenza says. “This enables us to purify a protein that accumulates in cells that are not receiving enough oxygen away from the tens of thousands of other proteins in the cell and obtain the amino acid sequence of the protein, which in turn allowed us to isolate the DNA sequences.”

Sherita Golden, M.D., M.H.S., Johns Hopkins Medicine vice president and chief diversity officer, is among the people in the video. She speaks about the importance of remembering Mrs. Lacks’ legacy and her contribution to scientific advancement.

“Her story illustrates the important lessons learned about the need to change our approach to science, medicine and research, so that marginalized communities are not taken advantage of in our pursuit of discovery,” Golden says. “For me, it is a reminder that in all realms of society we have to advocate and fight for the rights of those who are marginalized, vulnerable and who don’t have a voice. Mrs. Lacks did not have a say in whether her cells were harvested; we have subsequently built in protections for those who are under medical care and are participants in research studies.”

The video discusses these protections, including informed consent, the right to withdraw from a study at any time, and infrastructure to voice concerns at any point during the research process. Roland Pattillo, M.D., also participated in the video. He was the only African American at The Johns Hopkins University to study under George Gey, M.D., the researcher who was able to grow Lacks’ cells from a biopsy when she was being treated for cervical cancer.

Golden says there is hope because academic health systems are forming key partnerships with community organizations to address the social determinants of health that result from structural racism. They are learning to open their minds and become allies and advocates.

“At the end of the day, diversity and inclusion in health care is a matter of life or death because our biases can impact our health care decisions in a way that may disadvantage patients,” Golden says.

The winner of this year’s award was HeartSmiles, a Baltimore-based organization dedicated to motivating, inspiring and empowering Baltimore’s youth, in cooperation with the Johns Hopkins Center for Adolescent Health. They were honored for their work on the youth-led “Granny Project,” which aims to help resolve food insecurity by providing food to low-income community members and then hosting weekly YouTube Live sessions with special cooking and exercise tips.

“Young people in our community are still passionate and optimistic that they can make a difference, and we want to support them every step of the way,” Ford says of the scholarship and memorial award.

Cooper says much of the work being done today to address critical health issues in communities like Baltimore has been made possible by the issues raised by Henrietta Lacks’ experiences and her contributions to science, and efforts to rectify past wrongs.

“During this challenging time of a world pandemic, honoring Mrs. Lacks’ extraordinary legacy is timely,” says Cooper. “It is also a way for us to acknowledge how much we have all been affected, but communities of color the hardest, and to recommit, as scientists and health professionals, to playing an active role in building trust with our communities and working together to create a better and more just world.”

“We are truly grateful to the Lacks family for allowing us to share Mrs. Lacks’ legacy,” she says.

Mrs. Lacks began undergoing radium treatments for her cervical cancer, which was the best medical treatment available at the time for this disease. A sample of her cancer cells retrieved during a biopsy was sent to George Gey’s nearby tissue lab. For years, Dr. Gey, a prominent cancer and virus researcher, had been collecting cells from all patients who came to The Johns Hopkins Hospital with cervical cancer, but each sample quickly died in Dr. Gey’s lab. What he would soon discover was that Mrs. Lacks’ cells were unlike any of the others he had seen: Where other cells would die, Mrs. Lacks’ cells doubled every 20 to 24 hours.

Today, these incredible cells — nicknamed “HeLa” cells, from the first two letters of her first and last names — are used to study the effects of toxins, drugs, hormones and viruses on the growth of cancer cells, without experimenting on humans. They have been used to test the effects of radiation and poisons, to study the human genome and to learn more about how viruses work. They played a crucial role in the development of the polio vaccine. 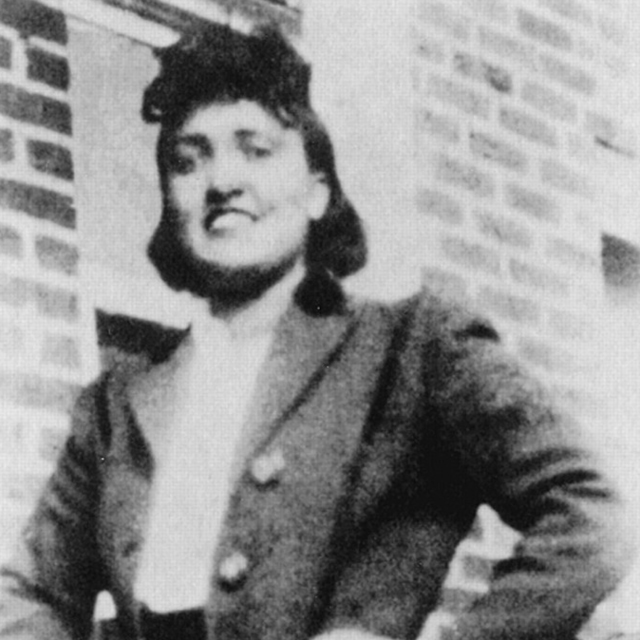 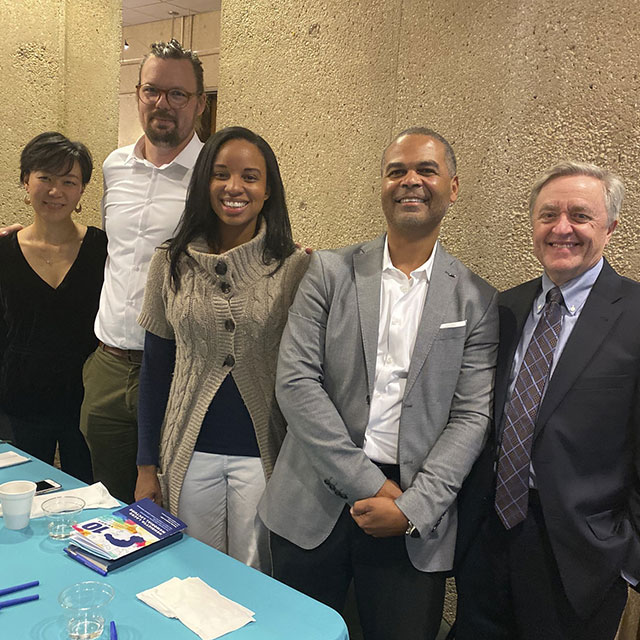 Johns Hopkins University officials recently announced their selection of Vines Architecture to lead the planning stages for a multidisciplinary building that will honor the legacy of Henrietta Lacks at the 10th annual Henrietta Lacks Memorial Lecture. 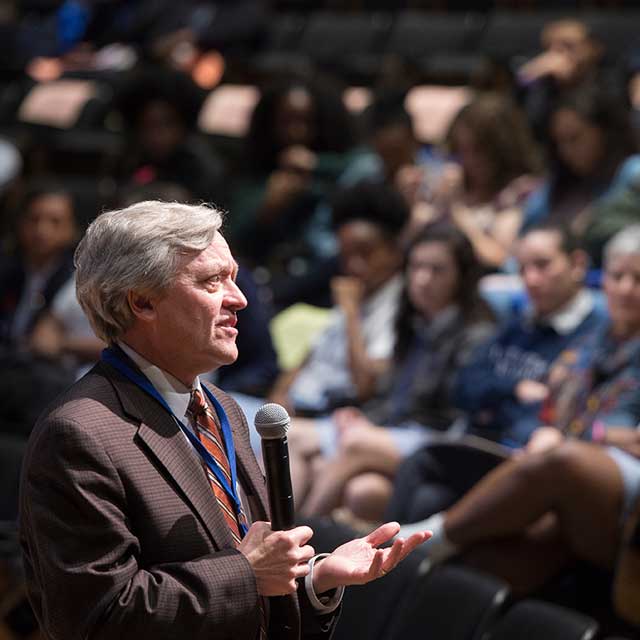 Hundreds of students learn about research, ethics, and a Baltimore woman whose cells changed the world.