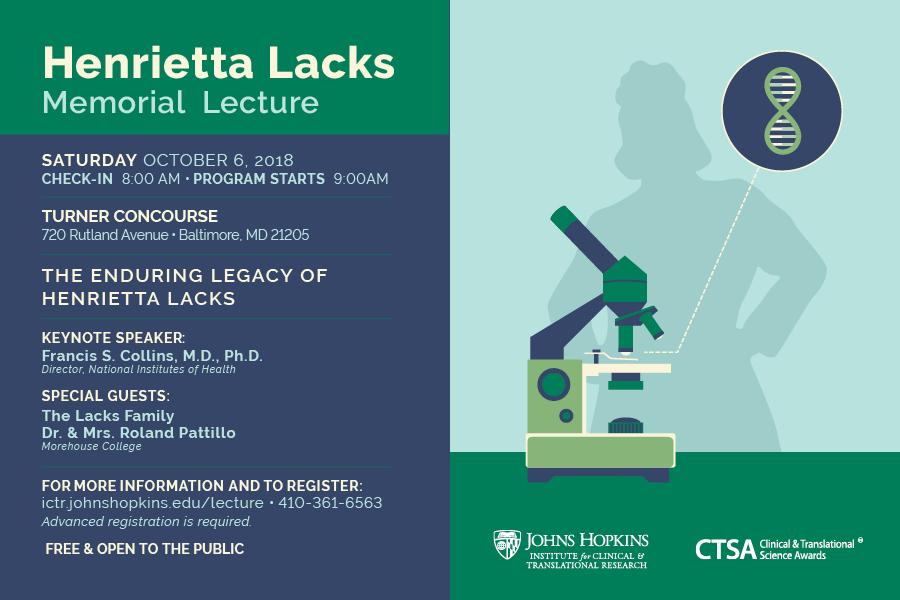 To cheers, applause and an enthusiastic standing ovation, Johns Hopkins University President Ronald J. Daniels and Paul B. Rothman, dean of the medical faculty and CEO of Johns Hopkins Medicine, announced at the Henrietta Lacks Memorial Lecture on Oct. 6 that a new research building would be named for Henrietta Lacks.

The announcement was the highlight at the ninth annual symposium the Institute for Clinical and Translational Research (ICTR) hosts to mark the legacy of the 31-year-old mother of five who sought treatment at The Johns Hopkins Hospital for what would be diagnosed as an aggressive form of cervical cancer. She died eight months later on Oct. 4, 1951.

A sample of her cancer cells was retrieved during a biopsy, and sent to the tissue lab of prominent Hopkins researcher George Gey, who had been collecting cells from patients who came to the hospital with cervical cancer. He discovered that Lacks’ cells, nicknamed “HeLa,” multiplied, where other cells would die. Gey began sharing the cells, at no cost, with researchers around the world. Hea cells have since contributed to many medical advances, from development of the polio vaccine to the study of HPV, HIV/AIDS and leukemia, and they impact scientific research to this day as they continue to multiply.

Fittingly, at Turner Auditorium, Daniels told a capacity audience of community members, staff and Lacks’ descendants, that the research building bearing Lacks’ name will be constructed at Ashland and Rutland, next to Deering Hall, where the Berman Institute of Bioethics is located. It will serve as a gateway to Eager Park, the revitalized 88-acre space north of the East Baltimore campus. Groundbreaking is scheduled to begin in 2020 with an anticipated completion in 2022.

Daniels said the building will be a place that “stands as an enduring and powerful testament” to Lacks, who represents a “genesis of generations of miraculous discoveries that have changed the landscape of modern medicine and that have benefitted in truth the much larger family of humanity entirely.”

Rothman called the naming of the multidisciplinary building a thank-you for Henrietta Lacks’ legacy, and an enduring “symbol for how medical research should be a partnership between researchers, the patients we study and the community.”

Lacks’ story, particularly as told in the 2010 release of the book, The Immortal Life of Henrietta Lacks, raised bioethical issues regarding informed consent, medical records privacy and communication with tissue donors and research participants.

Daniel Ford, vice dean for clinical investigation and director of the ICTR, stated that over the past decade, Johns Hopkins has expanded its research teams to include more patients and community members, reached out to the community advisory council when considering changes to our research policies, and improved our communication back to research participants about results from studies in which they participate.

Megan Kasimatis Singleton, director of the Human Participant Protection Programs at Johns Hopkins, described how the IRB oversees research protocols and include community’s perspective in their work. The institution also surveys participants every six months to learn about their experience.

Taylor-Lee Neal, a Dunbar High School junior, who persevered through the death of her mother to breast cancer and father’s illness with kidney cancer, was selected as the 2018 recipient of the Henrietta Lacks Dunbar Health Sciences Scholarship, established to inspire Dunbar High School students to consider biomedicine as a career path. Neal participated in the Project Lead the Way Biomedical Science Program and the Hopkins Nursing Enrichment Program at Dunbar. In addition to the $40,000 scholarship over her college career, Johns Hopkins will provide mentors as Neal pursues a goal to become an obstetrician or anesthesiologist.

Francis Collins, a physician-geneticist and director of the National Institutes of Health (NIH), who led the human genome project for NIH, delivered the symposium’s keynote address.

Since 1953, Collins noted, when research made reference to the HeLa cells anonymously, more than 100,000 papers refer to the cells in 142 countries, and three Nobel Prizes have been built upon research using the cells and involving  telomerase, HPV and cancer, and nanoscale imaging.

“The HeLa cells continue to be hard at work in remarkable ways,” Collins said. “They are growing in my laboratory at NIH and in tens of thousands of laboratories all over the country and the world because they are so well known, so well studied and they grow so effectively. We can learn enormous things about human biology and medicine from studying these cells, and they have yielded so many surprising findings that have gotten us to where we are.”

In 2013, Johns Hopkins worked with members of the Lacks family and the NIH to help broker an agreement that requires scientists to receive permission to use Henrietta Lacks’ genetic blueprint in NIH-funded research. So far, Collins said, NIH has approved 72 of 78 requests the agency has received.