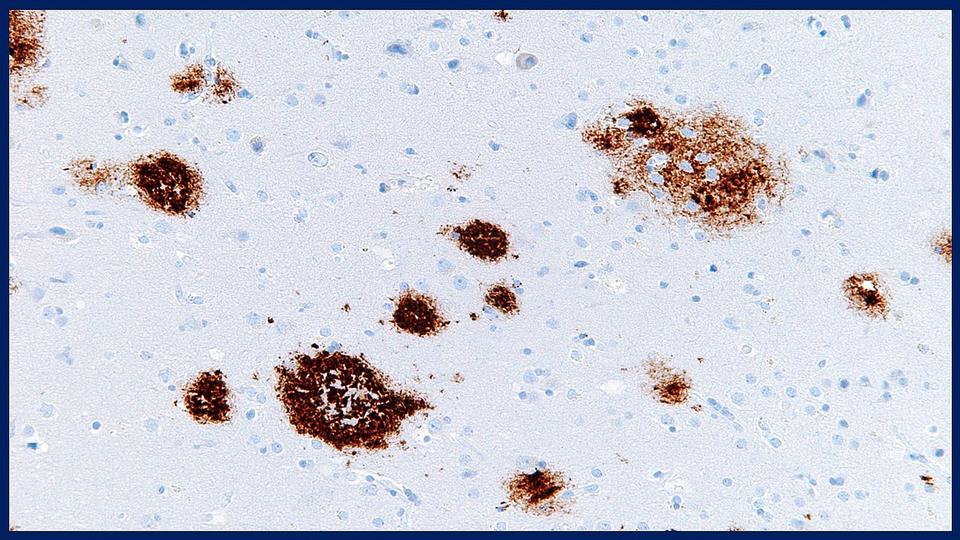 Photomicrograph showing amyloid beta protein (brown from staining) in tissue taken from a human brain. Johns Hopkins Medicine researchers have shown that the glymphatic system — the vascular network that removes waste from the central nervous system — helps clear amyloid beta from the brain, and that failure to do so may lead to Alzheimer’s disease. Credit: Public domain image courtesy of Michael Bonert

Alzheimer’s disease is one of medicine’s most elusive thieves, a disease that slowly and irreversibly robs a person’s ability to think, reason, remember and maintain normal body functioning. The underlying cause of Alzheimer’s disease is unknown, but researchers believe that one of the prime suspects is a microscopic fragment of protein known as amyloid beta (Aß). Scientific evidence suggests that tangled, sticky masses of Aß called plaques disrupt communication between brain cells and eventually, lead totheir death.

A recently published study, conducted by Johns Hopkins Medicine researchers David Nauen, M.D., Ph.D., assistant professor of pathology, and Juan Troncoso, M.D., professor of pathology, may be one of the first to provide evidence that in humans, Aß proteins exit the brain via the glial-lymphatic (glymphatic) system — the vascular network that helps clear waste materials during sleep from the central nervous system.

“This observation supports the hypothesis that the glymphatic system contributes to the clearance of amyloid beta from the brain, and that failure to do so may lead to plaque formation,” Troncoso says.

The findings were first reported online May 31, 2021, in Alzheimer’s & Dementia, The Journal of the Alzheimer’s Association.

Nauen says animal studies in recent years have demonstrated the role of the glymphatic system as the brain’s “trash remover,” clearing Aß and other metabolites. However, he says, this glymphatic cleansing was difficult to verify in humans.

“In the absence of an imaging method that would enable us to see the glymphatic system in action, we decided instead to look for Aß-labelled cells in lymph nodes that had been surgically removed, as part of standard cancer treatments, from 27 patients [17 women and 10 men],” says Troncoso. “Evaluating lymph nodes taken from two different regions — the neck [cervical area] and the inguinal [groin] area — enabled us to define whether Aß was present, and if so, whether it was likely drained from the brain [which would be predominantly cervical] or from the lower extremities [which would be predominantly inguinal].”

What Nauen and Troncoso found was that the levels of Aß-containing cells were more than 40 times higher in the excised cervical lymph nodes compared with the inguinal nodes, strongly suggesting that the glymphatic system helps remove the destructive protein from the brain.

The researchers say their finding needs to be validated in an autopsy study where there is access to cognitive histories of the decedents, before-death measurements of Aß levels in the cerebrospinal fluid and plasma, data from neurological and pathological evaluations, and detailed examinations of the cervical and inguinal lymph nodes to document the presence of Aß fragments.