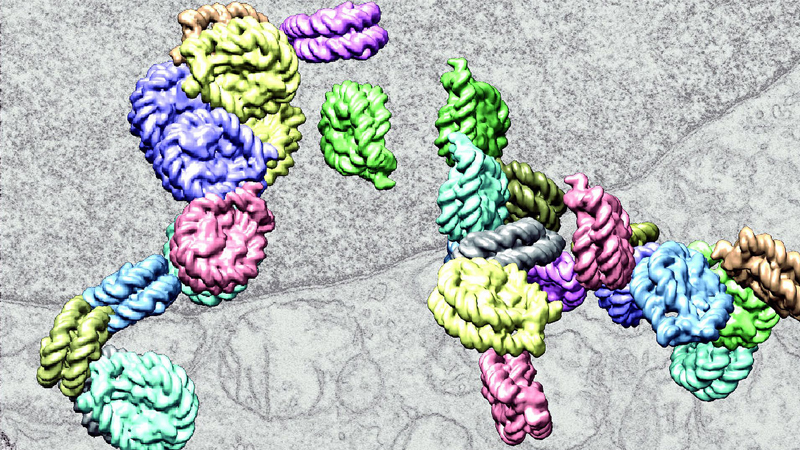 This computer-enhanced electron micrograph image shows chromatin chains interacting and folding within a cell nucleus. A new Johns Hopkins Medicine technique uses this folding to identify which cells of the brain are most susceptible to inherited genetic variants linked to schizophrenia. Credit: With permission from the Salk Institute and the National Institute of Biomedical Imaging and Bioengineering

Scientists at Johns Hopkins Medicine have found types of cells in the brain that are most susceptible to inherited genetic variants linked to schizophrenia. As a result, their work reveals a shortlist of the variants that most likely impact disease risk.

Details of the scientists’ analysis, published April 17, 2020, in Genome Research, compared human genetic studies with data on how DNA is folded in mouse cells, including a diversity of brain cells.

“Every common disease has a major genetic component at its root,” says Andrew McCallion, Ph.D., professor of genetic medicine at the Johns Hopkins University School of Medicine. “Studying genomes across human populations helps us find the genetic landmarks that are linked to disease, but these often don’t give us the biological insight that pinpoints the cells in which that variation acts to impact disease risk.”

For example, says McCallion, the functional region of a gene variant may act differently in the liver than in a brain cell.

For the study, McCallion and doctoral candidate Paul Hook aimed to find the specific cell types in the brain that show the most evidence of being affected by heritable variations in the genome linked with schizophrenia. To find genetic variants among human populations, scientists traditionally use data on the genetic sequence of DNA, or the chemical code that forms our DNA. However, other information about our DNA, such as which genes are turned on or off and how the DNA is folded in different cells reveals patterns that can shed light on what cell types are more likely to be affected by genetic variations in diseases. These variations could make the difference between inheriting risk for a condition such as schizophrenia or not.

One major challenge of human genetic studies is that even when scientists link a region of the genome to disease risk, there may be tens or even hundreds of variants in that location. McCallion and his lab search for ways to systematically use biological data to refine those long lists.

Information on how DNA, packaged with proteins as chromatin, is folded can tell scientists which regions of the genome may be activating genes in different cells at any point in time. Opening the tight constraints of chromatin allows critical proteins access to the DNA-encoded gene switches to start the process of making proteins. Yet, most of the data about chromatin folding in humans has come from cell samples among areas of the body that are easy to access.

For studying neurological disorders, those purified cell samples — embedded deep in the brain — are hard to come by, making it difficult for scientists to make progress on understanding disease origins. McCallion says scientists recently showed that cells from mouse brains often use the same gene “on-off” switches as in humans.

As a proof of principle, McCallion and Hook compared patterns among 25 sets of data on chromatin folding in a diverse range of mouse brain cells with 64 studies of human traits and their associated genetic variation. Their study of chromatin folding patterns in mice revealed a subset of cell types in which more than 170 regions of the human genome have been linked to increased risk for schizophrenia.

Then, the researchers drilled down into the 25 mouse cell datasets to find chromatin folding patterns among six types of brain cells that appear highly important to the origins of schizophrenia.

Looking layer by layer among cells in the cerebral cortex, they found the most similarities between genetic variants and chromatin folding in layers four and five.

McCallion and Hook also identified a short list of 281 variants (reduced from 62,000) that are most likely to increase schizophrenia risk and should be studied further.

The data confirm other genomic studies identifying the cerebral cortex as important for the biologic underpinnings of schizophrenia, McCallion notes, but their work goes further by implicating precise cell layers affected and predicting which variants impact risk.

“Using chromatin data from mice along with studies of human genomic variations can be an important model in identifying cell populations most impacted by genetic variation,” he says.

Eventually, the findings can help scientists map precise locations for disease impact, says McCallion, and develop therapies that are targeted more specifically to cells in those locations.