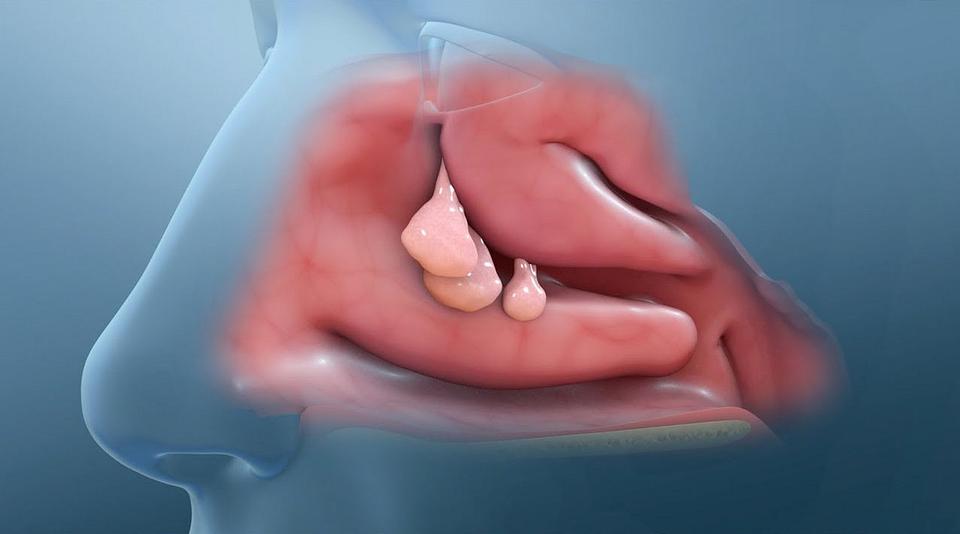 Johns Hopkins Medicine researchers have identified a protein — DMBT1S8 — that is elevated in patients who develop chronic inflammation of the nasal and sinus cavities with polyps, such as the ones seen in this artist’s rendition. DMBT1S8 may be a target for future therapies. Credit: Public domain image courtesy of Nucleus Medical Art Library

Johns Hopkins Medicine researchers have identified a protein — DMBT1S8 — as a target for potential therapies to treat inflammation in the nasal and sinus cavities.

The researchers’ findings were published March 20, 2021, in the journal Glycobiology.

Nasal and sinus inflammation — known medically as chronic rhinosinusitis — is one of the most common chronic illnesses in the United States, according to the U.S. Centers for Disease Control and Prevention. But for people with the most severe form of the condition, chronic rhinosinusitis with nasal polyps, it isn’t your average stuffy nose.

Patients with this disorder are more susceptible to developing nasal obstruction, asthma or asthma like symptoms, sleep apnea, or loss of taste and smell. Corticosteroids are sometimes prescribed to treat severe forms, but are known to have dangerous side effects if used too long.

Fifteen years ago, Jean Kim, M.D., Ph.D., associate professor of otolaryngology–head and neck surgery at the Johns Hopkins University School of Medicine, and colleagues found that a protein called DMBT1 (deleted in malignant brain tumors-1) was elevated in nasal polyp tissues. However, the significance of this finding was unclear.

A more recent study by a team led by Ronald Schnaar, Ph.D., the John Jacob Abel Professor of Pharmacology at the Johns Hopkins University School of Medicine, found that a key process controlling this type of inflammation requires a specific molecular structure known as siglec-8 (S8) in order to occur. Siglec-8, the researchers learned, binds with DMBT1 to form the isoform, or nearly identical twin, of DMBT1 called .

Building on this research and searching for rhinosinusitis therapies with fewer side effects, Kim and her team conducted their latest study, an analysis of nasal secretions and biopsies from patients with chronic rhinosinusitis with nasal polyps. They wanted to understand more about the mechanism of the condition, specifically which type of sinusitis patient expresses the DMBT1S8 protein and from where in the nose it is produced.

“It was important for us to not only identify that DMBT1S8 is made in the airway, but also to understand its role in the development of nasal polyps,” Kim says.

The researchers discovered that the level of DMBT1S8 proteins was more elevated in patients with chronic rhinosinusitis with polyps than in those with the nasal inflammation but no polyps.

The researchers also found that the DMBT1S8 protein is more likely to be located in the portion of a polyp where it is made, a region known as the submucosal glands. They speculate that from there, the protein is secreted into the airway and functions to control the inflammatory response involved in nasal polyp formation.

Kim says that learning how to manipulate DMBT1S8 structure and function may enable the development of novel therapies that can boost the anti-inflammatory response against chronic rhinosinusitis with nasal polyps.