To Culture or Not to Culture: New Tool Helps Decide — And Lower Antibiotic Use in the PICU 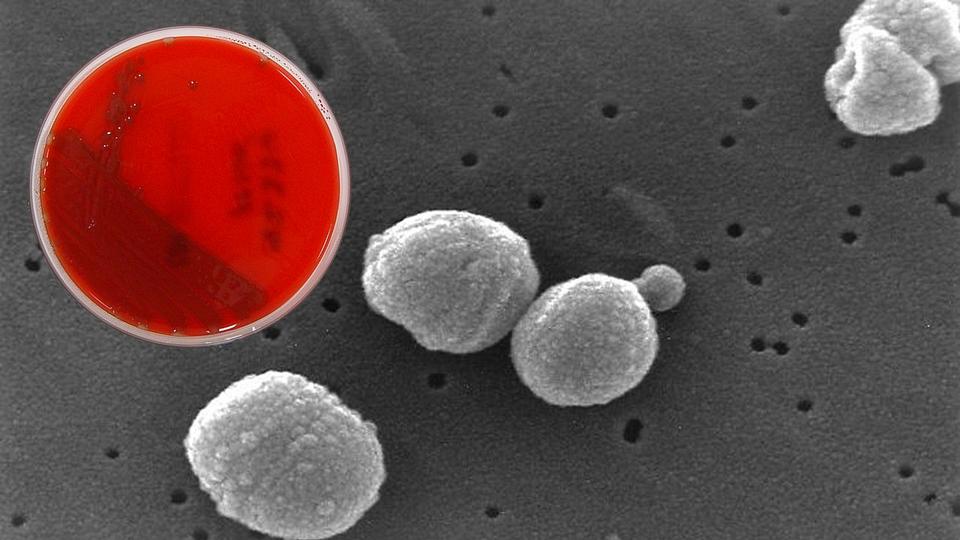 A blood agar culture of Streptococcus pneumoniae superimposed over an electron micrograph of the dangerous bacteria, a leading cause of infections in patients in the pediatric intensive care unit who are ventilated with endotracheal tubes. Because bacteria cultured from tubes are not always pathogenic, it’s important to take samples only when infection is likely. A new bedside tool designed by Johns Hopkins Medicine helps clinicians know when — and when not — to call for the test, and in turn, avoid misuse or overuse of antibiotics. Credit: Graphic created by M.E. Newman, Johns Hopkins Medicine, using culture dish image in public domain and electron micrograph from the U.S. Centers for Disease Control and Prevention

The dictionary defines stewardship as “the job of properly and responsibly taking care of things so that they can be used effectively.” Nowhere is that concept — and the responsibility attached to it — taken more seriously than in a pediatric intensive care unit (PICU), especially when it involves stewarding the appropriate use of antibiotics. Now, Johns Hopkins Medicine researchers hope to make that high-value health care task simpler and more effective with a new bedside tool that helps clinicians better determine when to test for bacteria in endotracheal tubes being used for critically ill pediatric patients.

The findings were reported in the May 2021 issue of the journal Pediatrics.

To diagnose potentially serious bacterial respiratory infections in a PICU patient receiving invasive mechanical ventilation with an endotracheal tube, physicians and nurses often obtain secretions from inside the tube (known as an endotracheal aspirate) and culture it in the laboratory. The problem with these endotracheal aspirate cultures (EACs) is they may lead to a case of mistaken identity that could do the patient more harm than good, says study lead author Anna Sick-Samuels, M.D., M.P.H., a pediatric infectious disease specialist at Johns Hopkins Children’s Center and assistant professor of pediatrics at the Johns Hopkins University School of Medicine.

“The human respiratory tract is far from a sterile environment, so bacteria cultured from aspirated samples may just be part of the body’s normal microflora and not be causing an infection that needs antibiotics,” says Sick-Samuels. “However, the detection of any bacteria in these cultures is often misinterpreted as a sign of a ventilator-associated infection, which then may result in unnecessary — and potentially harmful — antibiotic treatment.”

To address the problem, Sick-Samuels and her colleagues developed a clinical decision support algorithm for use in the PICU. The algorithm is a simple flow chart of progressively more definitive, “yes or no” criteria by which clinicians can make an informed, rather than speculative, decision about whether or not an EAC is needed.

“The algorithm standardizes the thought process and makes the clinician carefully consider whether or not to call for an EAC, which in turn, prevents a ‘knee-jerk’ response to bacteria and the inappropriate use of antibiotics,” says Sick-Samuels. “It also helps reduce the problem of clinicians ordering repeated EACs from the same patient, even though the same bacteria typically grow again in repeated cultures.”

For a PICU patient with a tracheostomy (a surgically created airway directly into the trachea) or an endotracheal tube in place for more than 48 hours, Sick-Samuels explains that the algorithm asks clinicians to consider obtaining an EAC only if:

To test the effectiveness of their algorithm, Sick-Samuels and her research team put it to work as part of a 12-month quality improvement program at the Children’s Center PICU. In the year before the tool was implemented, the researchers documented 557 EACs obtained over 5,092 days of patients on mechanical ventilation (tracheostomy or endotracheal tube). This was equivalent to 10.9 EACs for every 100 ventilator-days.

In the year after the algorithm became part of the regular clinical practice at the Children’s Center PICU, the number of EACs dropped to 234 over 3,654 ventilator-days, or 6.5 per 100 ventilator-days — a 40% reduction. The researchers say the use of the algorithm and the resulting sustained decline in EACs did not change the number of deaths, readmissions or lengths of stay for patients in the PICU. They also estimate that the direct cost savings from obtaining fewer EACs would be approximately $26,000 per year.

What makes this stewardship different from other programs seeking to prevent the inappropriate use or overuse of antibiotics, says Sick-Samuels, is that the “decision tree” process goes to work earlier in the thought process before antibiotics might be started.

“The algorithm makes the early decision for or against microbiological testing the pivotal point, not the choice of whether or not to prescribe antibiotics,” she says. “At JHCC, it really did make our staff more mindful and aware of their actions, and it led to a shift in practice that was sustained even through the COVID-19 pandemic.”

Next, the researchers plan to introduce diagnostic stewardship of EACs at 15 pediatric centers across the United States, validate its effectiveness and show that the stewardship program can be adapted for use in other PICUs. They also hope their efforts will serve as a model for EAC decision-making tools that can be used in other clinical settings.