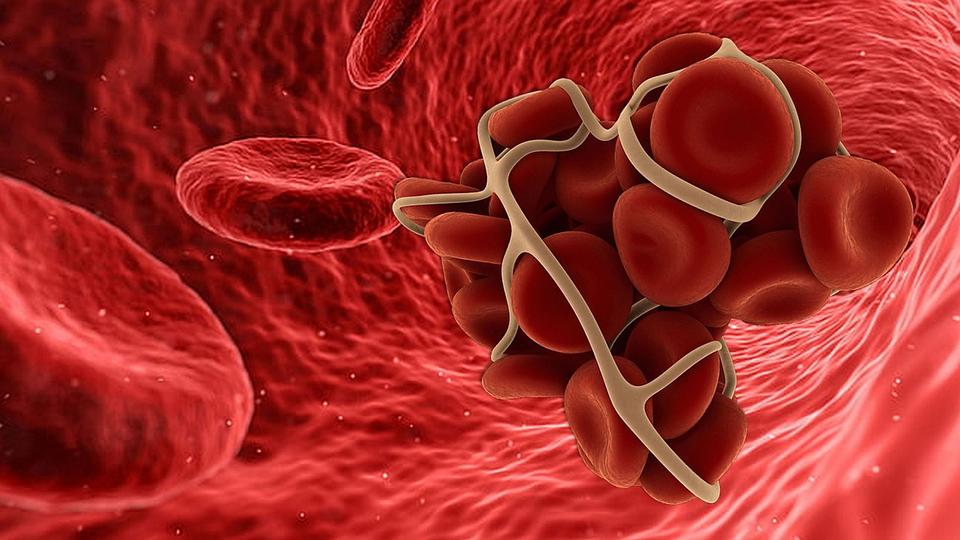 A blood clot — comprised of red blood cells, platelets, and fibrin — has dislodged from the wall of a vein and begun traveling through the vessel to the lungs. If it blocks blood flow in the lungs, it can cause a pulmonary embolism. Researchers at Johns Hopkins Medicine have shown in a recent study that having hospitalized patients only walk or exercise after surgery may not be sufficient to avoid this from happening. Credit: Graphic created by M.E. Newman, Johns Hopkins Medicine, using public domain images

Based on a systematic review of scientific studies dating back nearly 70 years, researchers at Johns Hopkins Medicine and collaborating institutions suggest that ambulation — walking or exercising without assistance — is not sufficient alone as a preventive measure against venous thromboembolism (VTE), a potentially deadly condition in which a blood clot forms, often in the deep veins of the leg, groin or arm (known as a deep vein thrombosis) and may dislodge. If that happens, the clot will travel via the bloodstream to lodge in the lungs and cause tissue damage or death from reduced oxygen (known as a pulmonary embolism).

The researchers presented their findings in the Dec. 8, 2020, issue of the Canadian Medical Association Journal Open.

According to the U.S. Centers for Disease Control and Prevention, VTE annually affects some 300,000 to 600,000 individuals in the United States, and kills between 60,000 to 100,000 of those stricken. Among the groups at highest risk are hospitalized patients, especially those who undergo surgery.

Since the 1950s, ambulation — in the form of walking or foot/leg exercises — as soon and as often as possible following surgery has been recommended as a means of reducing the threat of VTE in high-risk patients. The latest study was conducted to see if ambulation is enough or if other measures — primarily medications known as anticoagulants or blood thinners — are needed.

“Our systematic review revealed little evidence to support ambulation alone as an adequate means of preventing VTEs,” says Elliott Haut, M.D., Ph.D., associate professor of surgery at the Johns Hopkins University School of Medicine and senior author of the study.

The findings, Haut says, are concerning because ambulation is commonly thought to be effective as the sole prophylaxis used to avoid VTEs. In fact, he adds, several national and international clinical guidelines recommend this course of action.

“It’s a mistaken belief that often leads to doctors discontinuing what they perceive as unnecessary medication or nurses presenting ambulation as an alternative prophylaxis to patients,” says study lead author Brandyn Lau, M.P.H., assistant professor of radiology and radiological science at the Johns Hopkins University School of Medicine. “On the contrary, there is overwhelming evidence supporting medications to prevent VTE in nearly every applicable population admitted to a hospital.”

Haut, Lau and their collaborators hope these findings will help change the long-standing misconception that ambulation can prevent VTEs on its own and persuade physicians to take a more comprehensive approach.