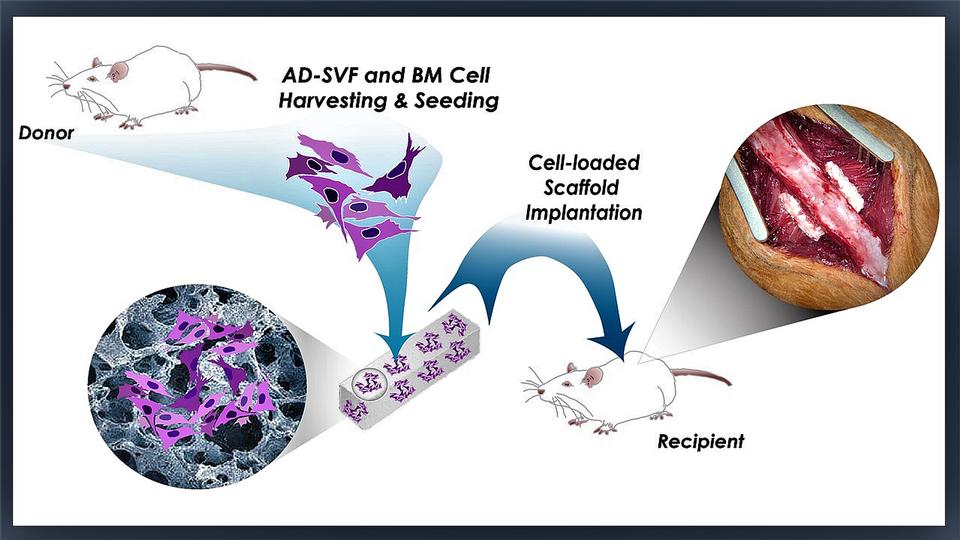 Adipose cells, better known as fat, may be the least popular component of the human body. However, most people don’t realize that fat actually has many important functions in establishing and maintaining good health — providing energy, insulating the body against heat loss and protecting nerves, just to name a few. Now, researchers at Johns Hopkins Medicine suggest there’s another role for the poor maligned adipose cell: a practical and plentiful source of stem cells for use in spinal fusion surgeries.

Spinal fusion, used to correct problems in the spine, is the “welding” together of two or more vertebrae so that they heal into a single, solid bone. Unfortunately, the surgery — using bone taken from other parts of the patient’s body — fails in up to one out of every five procedures. Researchers have found that stem cells, harvested from a patient’s marrow and allowed to mature into bone cells, can yield successful outcomes when used in spinal fusions. However, the aspiration method for extracting stem cells from the marrow carries a risk of infection and often is painful.

In a study published in the May 2021 issue of the journal Spine, Timothy Witham, M.D., director of the Johns Hopkins Neurosurgery Spinal Fusion Laboratory, Alexander Perdomo-Pantoja, M.D., a postdoctoral fellow at the Johns Hopkins University School of Medicine, and Christina Holmes, Ph.D., a former Johns Hopkins Medicine postdoctoral fellow now at Florida State University, worked together with colleagues to try out adipose cells rather than bone marrow as a source for the stem cells.

Performing spinal fusion procedures in rats, the researchers found that freshly isolated stem cells from fat worked just as well as the more commonly used bone marrow stem cells. The researchers say this suggests the technique could be a candidate for human clinical trials.

“Bone marrow stem cells are isolated in human patients from the hip,” says Holmes. “But using a huge needle to take out bone marrow is a painful procedure, and we can only get a limited number of cells, so we’ve found an alternative source by using stem cells from fat.”

“Spinal fusions are used for anything that causes spinal instability, which usually produces significant mechanical pain,” he says. “You see it frequently when we get older as the intervertebral discs, ligaments and muscles in the spine deteriorate. But these procedures can also be used to treat instability when it is caused by tumors, fractures, deformities or trauma.”

In this study, Witham, Perdomo-Pantoja, Holmes and their team isolated stem cells from fat and bone marrow, and then implanted them into rat spines. For the adipose-derived stem cells, the researchers chose to use freshly isolated cells to see if they could make the procedure simpler and faster.

Currently, stem cells from either bone marrow or fat are frequently grown in a laboratory culture to get them mature enough for a spinal fusion. During culturing, there is some risk of contamination or transformation into unusable bone. Holmes says that freshly isolating cells avoids these problems, along with being less labor intensive and cheaper because expensive processing materials are not needed.

While stem cells from fat are commonly used in cosmetic procedures, they are not often used in spinal fusions, she adds.

“We feel that fat cells are a logical alternative to bone marrow cells because most patients have an adequate supply of fat cells,” Witham says. ”Fat also is much more accessible during surgery and can be harvested with less stem cell death than bone marrow. Spinal fusion is a very common procedure, and we feel this approach could be applied across a wide cohort of spinal fusion patients.”

The researchers also were pleased to see the quality of the bone created by both forms of stem cells. They found significantly more bone formation and blood supply in the fresh adipose-derived stem cells compared with what they observed in previous studies with cultured cells from both fat and bone marrow.

Witham and his team hope to further their research by next identifying which cells are the most advantageous for spinal fusions and then characterizing them.