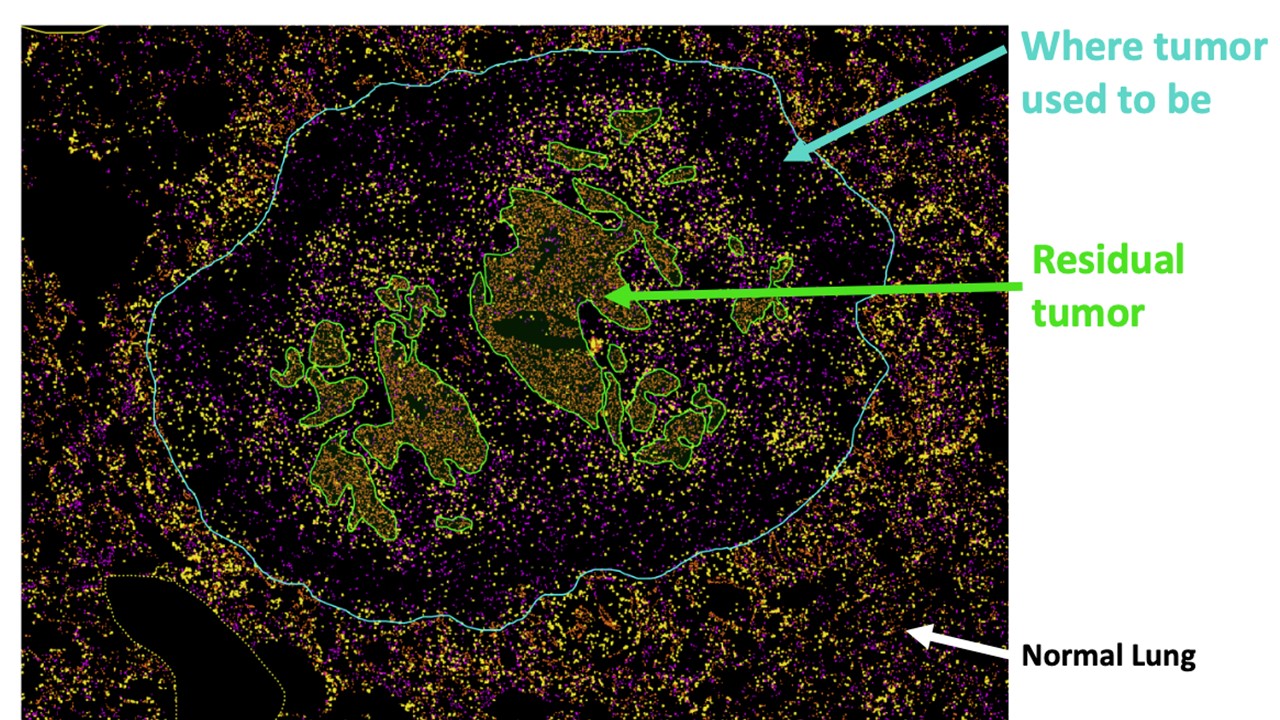 Multiplex immunofluorescence image from the AstroPath platform shows a 70% reduction in lung tumor size, prior to definitive surgery. In this image, remaining tumor is shown in orange; anti-tumor T-cells are shown in yellow; macrophages are magenta. Credit: Alexander Szalay, Ph.D., Janis Taube, M.D., M.Sc., and the AstroPath team

Adding the immunotherapy drug nivolumab to chemotherapy before surgery (neoadjuvant) for patients with operable non-small cell lung cancer (NSCLC) — the leading cause of cancer deaths worldwide — reduced the risk of recurrence of the cancer or death by more than one-third, according to results from the phase III CheckMate-816 trial. It also achieved a nearly twelvefold increase in pathological complete response — meaning no active cancer remaining when the tumor was removed — over patients who received chemotherapy alone.

The study, led by researchers at the Johns Hopkins Kimmel Cancer Center and the Bloomberg~Kimmel Institute for Cancer Immunotherapy, resulted in Federal Drug Administration (FDA) approval of the first immunotherapy/chemotherapy combination treatment for patients with operable NSCLC. It is the first FDA approval of a neoadjuvant immunotherapy for early-stage NSCLC.

Study findings were reported April 11 online in the New England Journal of Medicine. The publication coincides with a presentation at the annual meeting of the American Association for Cancer Research Clinical Trials Plenary Session.

“In this trial, we found that the addition of nivolumab to standard neoadjuvant chemotherapy reduced the risk of recurrence of the cancer or death by more than one-third. The treatment was also associated with mostly improved outcomes at surgery, including less extensive surgery, less blood loss and shorter time in the operating room,” says Patrick Forde, M.B.B.Ch., principal investigator of the trial, co-director of the upper aerodigestive cancer division at the Johns Hopkins Kimmel Cancer Center, associate professor of oncology, and associate member of its Bloomberg~Kimmel Institute for Cancer Immunotherapy.

Standard treatment for resectable lung cancer is surgery to remove the tumor, Forde says. Yet most patients experience a lung cancer recurrence after surgery, and when this happens, it usually is incurable. Chemotherapy, using the drugs cisplatin or carboplatin, known as platinum-based chemotherapy, given either before or after surgery, improves patient survival by only 5% at five years, he notes.

“We showed — for the first time — that immunotherapy can really improve outcomes when given with chemotherapy before surgery for newly diagnosed stage 1–3 NSCLC. It reduces the relapse rate by almost 40%, meaning that patients in this study, who would have likely gone on to die of lung cancer, may now be cured,” says Forde.

In the study, 358 patients with stage 1B to 3A resectable NSCLC were randomly assigned to receive standard platinum-doublet chemotherapy for three cycles, with or without 360 milligrams of the anti-PD-1 immunotherapy drug nivolumab, followed by surgery. Those who received the combination therapy achieved a pathological complete response rate of 24%, compared with 2.2% among those who received solely chemotherapy, had better surgical outcomes, and had a 37% reduction in the risk of cancer recurrence or death. Staging is based on the size and spread of the tumor. Stages 1B to 3A tumors in this trial were 4 centimeters or greater or involved the lymph nodes close to the primary lung tumor, but had not spread to distant parts of the body.

Pathological complete response was defined as no residual viable tumor presence when lung tumors and lymph nodes were examined after surgery. The pathology review was blinded, meaning the pathologist did not know from which arm of the study the specimen came. This review was led by Janis Taube, M.D., M.Sc., professor of dermatology and pathology, director of the Division of Dermatopathology, and member of the Bloomberg~Kimmel Institute for Cancer Immunotherapy. The data gleaned may provide the basis for use of pathological response as a key endpoint for future lung cancer trials, Forde says.

The current findings build upon a small 2018 study, led by Forde, Drew Pardoll, M.D. Ph.D., director of the Bloomberg~Kimmel Institute for Cancer Immunotherapy, and Julie Brahmer, M.D., professor of oncology and co-director of the upper aerodigestive program. In this earlier study of 21 lung cancer patients with operable tumors, patients were given two doses of nivolumab up to four weeks before surgery. Nine of the patients had a 90% or more reduction in the amount of live cancer cells in the tumor. Analyses performed at Johns Hopkins showed that T cells, part of the patient’s immune system, were stimulated to recognize and kill the cancer cells. These findings were published in a May 2018 issue of the New England Journal of Medicine.

“We’re excited by the prospect of adding new therapeutic regimens for this group of patients, who have historically been challenging to treat,” says study co-author Stephen Broderick, M.D., M.P.H.S., associate director of the Johns Hopkins Cardiothoracic Residency Program and a thoracic surgeon who treats patients with lung cancer at the Johns Hopkins Kimmel Cancer Center. “The combination treatment led to no increases in overall toxicity or delays to surgery compared to chemotherapy alone.”

The CheckMate-816 study was sponsored by Bristol Myers Squibb.