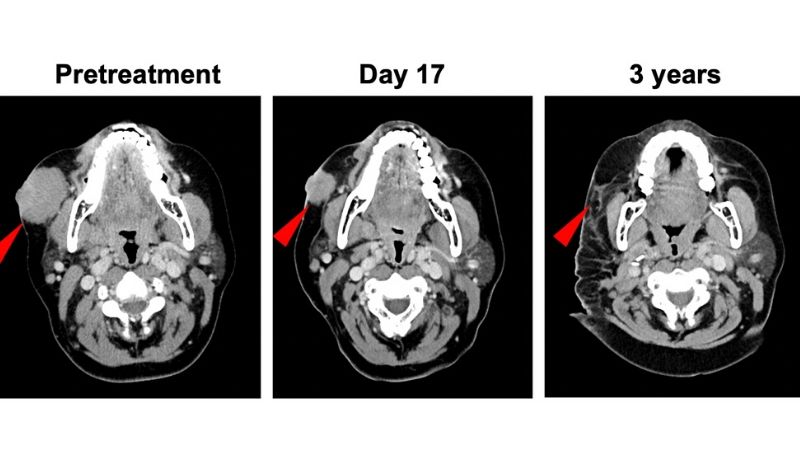 In what is believed to be a first-of-its-kind study to evaluate the safety of a type of immunotherapy before surgery in patients with an aggressive form of skin cancer, researchers report that the treatment eliminated pathologic evidence of cancer in nearly half of the study participants undergoing surgery. In patients whose tumors respond, this treatment approach offers the potential to reduce the extent of surgery and may also slow or eliminate tumor relapses that often occur after surgery.

A report on the Merkel cell cancer trial, directed by investigators at the Johns Hopkins Bloomberg~Kimmel Institute for Cancer Immunotherapy and the Johns Hopkins Kimmel Cancer Center in collaboration with the University of Washington Seattle Cancer Care Alliance and 10 other medical centers across the U.S. and Europe, will be published April 23 in the Journal of Clinical Oncology. An additional review article by Bloomberg~Kimmel Institute experts, published Jan. 31 in the journal Science, also points to the potential strategic value of giving immune checkpoint inhibitor therapy earlier in the course of cancer treatment.

Merkel cell carcinoma is classified as an “orphan disease” by the National Cancer Institute, diagnosed in approximately 2,000 people annually in the U.S. It typically appears as a red, blue or flesh-colored lump on the skin in older people and those who have suppressed immune systems. About 80% of Merkel cell carcinomas are caused by a virus called the Merkel cell polyomavirus. The remaining cases are linked to sun or other ultraviolet light exposure and unknown factors. Merkel cell carcinoma can spread to the lymphatic system and other organs. Surgery, radiation therapy and chemotherapy have been the mainstays of treatment. However, for Merkel cell carcinomas advancing beyond the point of surgery, there were previously no treatment options that could prolong survival. Recently, drugs blocking the immune checkpoints PD-1 and PD-L1 were shown to be effective in advanced inoperable Merkel cell carcinomas, and were approved by the U.S. Food and Drug Administration in this treatment setting.

“Merkel cell carcinoma appears to respond very rapidly to anti-PD-1 immunotherapy in some patients with advanced disease,” says lead study author Suzanne Topalian, M.D., associate director of the Bloomberg~Kimmel Institute for Cancer Immunotherapy. “This led us to test whether anti-PD-1 could be effective if given for a brief period before surgery, as so-called neoadjuvant therapy. Using this approach, we found that patients who had substantial tumor regressions on CT scans or in pathology studies of surgically removed tumor specimens had extended cancer recurrence-free survival that was statistically significant. Radiographic and pathologic tumor regressions following neoadjuvant anti-PD-1 therapy are therefore potential new, early markers that will help us predict what a patient’s long-term outcome will be. This is critical information for oncologists planning treatment strategies for their patients.”

Nivolumab, the immunotherapy drug used in this study, works against cancers including Merkel cell carcinoma by blocking PD-1, a molecule on the surface of immune cells that suppresses immune responses. Cancer cells often manipulate PD-1 by expressing its partner molecule PD-L1, sending a “stop” signal to the immune system. Blocking that signal with a checkpoint inhibitor such as nivolumab initiates a “go” signal, unleashing immune cells to attack cancer cells.

In the phase I/II trial of nivolumab in virus-associated cancers called CheckMate 358, patients with operable Merkel cell cancers received 240 mg of the anti-PD-1 drug intravenously on days one and 15 of the study, with surgery planned for day 29.

The trial was designed primarily to assess the safety and tolerability of nivolumab in this treatment setting. Investigators also assessed tumor regression using CT and MRI scans; studied the presence of cancer cells microscopically in surgically removed tumors; and studied pretreatment tumor biopsies to measure the presence of the polyomavirus causing Merkel cell carcinoma, the mutational burden (the quantity of gene mutations found in a tumor) and expression of the PD-L1 protein.

Overall, 39 patients with stage IIA-IV Merkel cell cancer (locally advanced or having spread to lymph nodes or internal organs) received at least one dose of nivolumab between January 2016 and March 2019. Among 36 patients who underwent surgery, 17 (47%) achieved a pathologic complete response, meaning that there were no live tumor cells anywhere in the surgical tissue. Among 33 patients undergoing surgery who also had imaging scans, 18 (54.5%) had radiographic tumor reductions of at least 30%. Each of these findings correlated significantly with prolonged recurrence-free survival. Patients were followed for a median of 20 months.

“These rates of pathologic and radiographic tumor regression after a brief four-week period of nivolumab therapy are very high compared to other cancer types in which anti-PD-1 treatment has been tried before surgery,” Topalian says. “For instance, in lung cancer, the published rate of complete pathologic response after neoadjuvant anti-PD-1 monotherapy is 15%, and in melanoma it is 19-25%. Furthermore, substantial radiographic tumor regression is not common within such a brief treatment period in other cancer types.”

Topalian cautions that the study was a relatively small one, and did not have a control group for comparison. All patients received the same treatment. However, she says, “We think these findings provide a rationale to conduct larger trials of neoadjuvant anti-PD-1 therapy in Merkel cell carcinoma, and have the potential to be practice-changing.”

“To our knowledge, this is the first attempt to look at the role of anti-PD-1 therapy before surgery in patients with Merkel cell carcinoma who are candidates for complete surgical removal of their tumor,” Topalian says. “We know that, historically, many of these patients would subsequently relapse after standard surgical and postoperative treatments. Even if we think we’re removing all of the existing tumor at the time of surgery, in many patients the tumor has already spread to other parts of the body, at microscopic sites of metastasis that are too tiny to be detected with scans.”

Investigators from the Bloomberg~Kimmel Institute co-led this study with researchers from the University of Washington Seattle Cancer Care Alliance, in collaboration with 10 other medical centers in the U.S. and Europe. The Bloomberg~Kimmel Institute team included Topalian; William Sharfman, M.D.; Julie Stein, M.D.; Elizabeth Engle, M.S.; and Janis Taube, M.D., M.Sc.

Separately, in a review paper published inScience by Topalian and Johns Hopkins colleagues Taube and Drew M. Pardoll, M.D., Ph.D., director of the Bloomberg~Kimmel Institute for Cancer Immunotherapy, the researchers summarized scientific and medical knowledge about the use of immune checkpoint blockers before cancer surgery. This includes the first published report of neoadjuvant PD-1 pathway blocking antibodies, tested in non-small cell lung cancer at Johns Hopkins and described in the New England Journal of Medicine in 2018, and additional studies of immune checkpoint blockers in melanoma, bladder cancer and brain cancer from other research groups. There are many more neoadjuvant anti-PD-1 studies maturing now in other cancer types including breast and head and neck cancers, Topalian says.

When people talk about preventing cancer, they generally mean preventing cancer from forming, she says. “However, these neoadjuvant immunotherapy studies speak to the possibility of preventing early-stage cancers from becoming end-stage. We think this is a very valuable approach. By using immune checkpoint blockers before definitive surgery for cancer, it may be possible in some patients to prevent to the disease from progressing to an inoperable stage. We look forward to a lot more information to come in this area.”

The work was supported by Bristol Myers Squibb and ONO Pharmaceutical Company Limited. Some of the scientific correlative work conducted at Johns Hopkins was supported by The Mark Foundation for Cancer Research and National Cancer Institute R01 grant CA142779. Authors received no financial support or compensation for publication of the study.