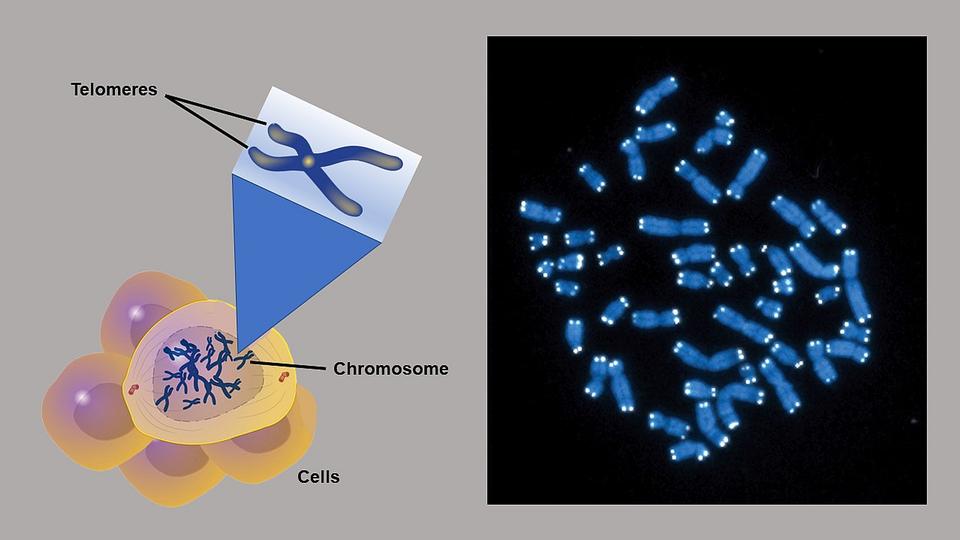 People with rare disorders that cause shortened telomeres — protective caps that sit at the end of chromosomes — may be more likely to have blood cancers such as leukemia or myelodyplastic syndrome. Now, Johns Hopkins Medicine scientists have discovered several “self-correcting” genetic mutations in bone marrow that may protect such patients from these cancers.

In a study published online August 3, 2021, in the Journal of Clinical Investigation, the researchers also suggest these mutations can serve as biomarkers that may indicate if patients with short telomere syndromes are likely to develop blood cancers.

“These are the most common cancers we see in patients with short telomere syndromes,” says Mary Armanios, M.D., director of the Telomere Center and professor of oncology at the Sidney Kimmel Comprehensive Cancer Center at Johns Hopkins. “We know that at a certain point, the cells of patients with shortened telomeres either become cancerous or stay healthy.”

With more than 300 billion blood cells produced in the bone marrow each day, the researchers suspected they could find evidence of cellular self-correction in this area of the body, especially amid the spongey interior of bones, where quick adaptation is crucial for high-volume cell production.

Using ultra-deep genetic sequencing (where parts of the genome are sequenced repeatedly to locate hard-to-find mutations), Armanios and her team observed genetic mutations and self-correction in several genes associated with telomeres. Nearly a quarter of patients with short telomere syndromes had these mutations, with some even showing multiple mutations.

One such mutation in a gene called TERT enables the production of crucial parts of an enzyme called telomerase, which in its complete form, stabilizes telomeres, the end-caps that protect the DNA in chromosomes.

By enhancing telomerase production and overwriting copies of the TERT gene that don’t work properly, the researchers found that bone marrow cells seemed to correct themselves to avoid becoming cancerous.

“Our findings speak to the versatility of the bone marrow and other areas with high cell turnover in the body,” says Armanios. “Such advantageous mutations provide the body with a better chance to protect itself. These findings may be important in the screening process of shortened telomere patients so that we can predict who may be protected from cancer.”