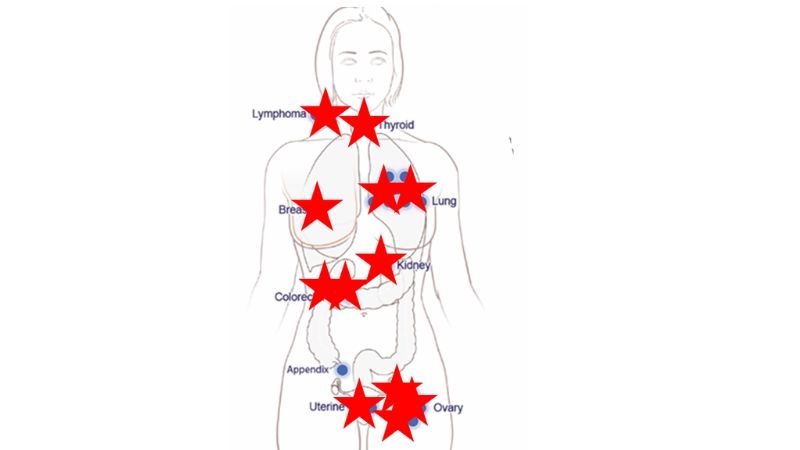 Results from a first-of-its-kind study of a multicancer blood test in more than 9,900 women with no evidence or history of cancer showed the liquid biopsy test safely detected 26 undiagnosed cancers, enabling potentially curative treatment.

Researchers at the Ludwig Center at the Johns Hopkins Kimmel Cancer Center, who developed the blood test, say the study, called DETECT-A (Detecting cancers Earlier Through Elective mutation-based blood Collection and Testing) represents the first time any liquid biopsy blood test was used clinically to screen for cancer in a population without previously detected cancer for the purpose of diagnosis and intervention — specifically treatment with the intent to cure cancer.

A report on the work will be published April 28 in Science and presented the same day at the virtual annual meeting of the American Association for Cancer Research. “This study suggests that a multicancer blood test can be complementary and additive to standard of care screening and may be a good strategy for increasing early detection of cancer,” says Anne Marie Lennon, M.B.B.Ch., Ph.D., professor of medicine, interim director of the Division of Gastroenterology and Hepatology, and lead author of the published report.

The multicancer blood test detects the presence of cancer gene mutations in circulating DNA and blood levels of specific cancer proteins. This test, called the DETECT-A blood test, was originally designed in 2016 by the research team. A more advanced version of the test, called CancerSEEK, was first reported in Science in January 2018. Improvements continue to be made to the test, such as those reported in the March 3 issue of the Proceedings of the National Academy of Sciences. The DETECT-A study was initiated before these advances were made,   says Lennon.

“The DETECT-A study incorporated PET-CT imaging to provide independent confirmation of the existence of a cancer and to precisely localize its site,” says Nickolas Papadopoulos, Ph.D., senior author and professor of oncology and pathology. “For example, we could detect a lung cancer, tell in which lobe of which lung the cancer was located, the size of the cancer and if there were metastatic lesions present. Blood tests alone are not able to provide this type of precise information.”

In the DETECT-A study, the blood test followed by PET-CT imaging was 99.6% specific for cancer. The researchers also confirmed that the genetic mutations picked up by the blood test that led to a positive test were present in the cancer 100% of the time.

“Our primary goal was to demonstrate reliability and safety — to show the blood test could lead to the diagnosis of cancers and get patients to treatment aimed at curing them,” says Kenneth Kinzler, Ph.D., professor of oncology and co-director of the Ludwig Center at Johns Hopkins.

A secondary goal was to show that blood testing could be integrated with conventional screening methods for detecting breast, colon and lung tumors.

Only women were chosen for the DETECT study because ovarian cancer — one of the cancers the test detects — occurs only in women, and the investigators wanted to have consistent comparisons.

Of the 10,006 female patients initially enrolled between September 2017 and May 2019, 9,911 completed the study. Of the 95 people excluded from the study, 73 voluntarily withdrew, 12 were found to have a history of cancer and 10 did not complete the necessary clinical workup.

Because study participants were all members of a managed health care system, all had access to standard of care cancer screening guidance, including recommendations for mammography to detect breast cancer and colonoscopy to detect colon cancer.

Importantly, 17 cancers (65%) first detected by the blood test were diagnosed at an early stage, when the cancer was still localized or regional to the area it originated. Twelve surgeries were performed with intent to cure. Of the 26 patients first detected by blood testing, 12 remain in remission and eight remain in treatment or have stable disease approximately nine months past diagnosis.

The investigators plan to continue to follow all 9,911 participants, including those with positive and negative test results, for five years. It is likely that other cancers that were too small to be detected by imaging or were not detected by the blood test will arise in these individuals.

Surveys conducted after the study showed that blood testing did not discourage participants from engaging in standard screening. Moreover, these surveys showed high satisfaction with the study. Specifically, among 6,874 participants who completed a survey 12 months post-enrollment, only 0.3% reported feeling they made the wrong decision by participating in the study. Similar responses were obtained from participants who received true positive and true negative test results and from those who received false positive or false negative results. Only 1% of respondents said they would be unwilling to join a similar subsequent study.

The investigators say additional studies reflecting an optimized version of the blood test are in planning. “We believe that more than two-thirds of cancers that occur in the U.S. can eventually be screen-detected, either by blood testing or standard screening, before they cause symptoms of disease. Such earlier detection has the capacity to substantially reduce suffering and death from many cancer types,” says Bert Vogelstein, M.D., Clayton Professor of Oncology, co-director of the Ludwig Center at Johns Hopkins and a Howard Hughes Medical Institute investigator. The test remains in research and is not currently available to the general public.