Prompted by a 13-year old patient and his mom who share a rare mutation and a potentially new respiratory disease, pediatric pulmonologist Christy Sadreameli pairs patient care and research in a new clinic.

The research discussed in this article was performed by Doris Duke Awardee Christy Sadreameli, MD, MHS. 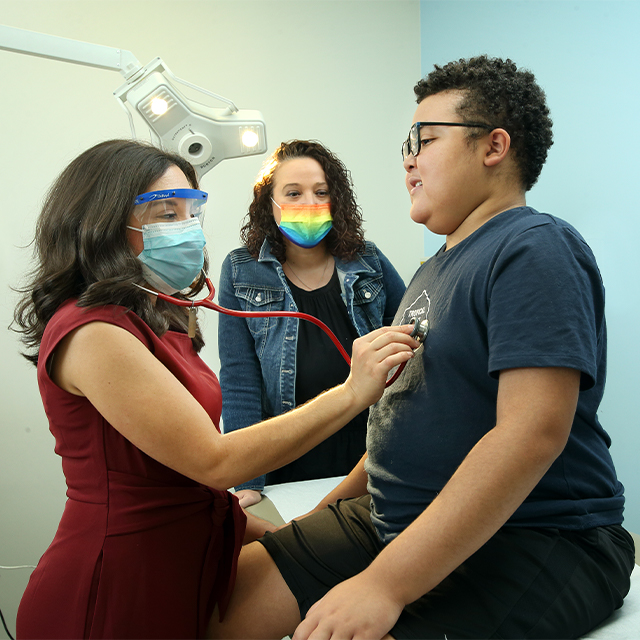 The way Katja Fort Rhoden tells it, her son Gregory’s symptoms started during a running event in kindergarten, when he complained of chest pain and shortness of breath. At the doctor’s appointment that followed, she adds, “his symptoms were written off as reactive airway disease and asthma and referred to an allergist. I was pretty sick at the time and thought he might have been mimicking me.”

Gregory was mirroring signs of his mother’s illness. When Gregory was 2 years old, Katja suffered respiratory failure and was eventually diagnosed with chronic variable immune deficiency (CVID) by immunologist Howard Lederman. CVID is characterized by low levels of protective antibodies and an increased risk of infections, particularly in the respiratory system. Her illness progressed over the years to the need for a double lung transplant.

Intuitively, Katja believed she and her son’s issues were related, literally. Two years after his initial symptoms, he developed a chest infection, which led to a visit to the Children’s Center’s Emergency Department. Soon afterward, Pulmonary Function Tests (PFT) at an allergist appointment revealed low numbers in the 70th percentile; any PFT number below 80 points to lung disease, and Gregory was referred to Pediatric Pulmonary Medicine.

After reviewing Gregory’s abnormal PFTs, pediatric pulmonologist Christy Sadreameli ordered a CT scan of the lungs, which revealed very unusual abnormalities similar to Katja’s, including emphysema. Sadreameli shared with Katja that they appeared to have the same disease. She then ordered a lung biopsy, which revealed abnormal results, including evidence of chronic bleeding, but provided no clear cause for his lung disease. Meanwhile, Gregory continued to deteriorate clinically: his exercise tolerance declined, and he started to cough up blood. Eventually, with a hemoglobin reading of 3.7, Gregory was admitted to the pediatric intensive care unit (PICU).

Sadreameli knew that Katja and Gregory shared a similar lung disease, but the question was, what disease? What was causing the abnormalities in pulmonary function, the CT findings, and in Gregory’s case, the bleeding leading to severe anemia, and how could it be treated?

Gregory underwent testing for many known lung disorders, including cystic fibrosis. She also ordered testing to look for a genetic or an autoimmune cause. The goal was to find any diagnostic information that would help guide Gregory’s treatment, but there were no easy answers to be found. Meanwhile, he underwent a workup to rule out other sources of bleeding, which confirmed that the bleeding was coming from the lungs.

With cystic fibrosis and other lung disorders ruled out, Gregory’s case of an unexplained diffuse lung disease fit most easily under the umbrella of childhood interstitial lung disease, or chILD, which like its adult form (ILD) can cause progressive and, in severe cases, irreversible lung disease. Like Katja, many people with ILD never fully regain full use of their lungs and are offered lung transplant as their only option.

“It was really bizarre – at the time I got my transplant Gregory was diagnosed,” says Katja. “We were like ships passing. That was the moment I realized there was a genetic component to my disease. That’s when we went down the rabbit hole.”

Gregory, however, did not test positive for COVID after Lederman screened him again and found his antibodies were now all normal Yet Gregory continued to present with the same clinical characteristics of his mom’s disease, but at a younger age and a faster pace. What was going on? To get at the answers, Sadreameli referred both Gregory and Katja for genetic testing, but seemingly at first to no avail.

“Through all of the testing, we tested negative for everything in the literature,” says Katja. “In reviewing my genetic testing, the hypothesis is a genetic variation of unknown significance.”

Sadreameli, realizing that in mother and son she was dealing with something extremely rare – a lung disease that had not yet been fully documented in the literature – continued to search for answers. She assembled a multidisciplinary group of experts and researchers at Johns Hopkins to review the cases. She reached out to the lung transplant team for slides of Katja’s removed lung and found signs of bleeding – another clue that this was the same disorder.

The genetic workup revealed Katja and Gregory shared the same mutation on the platelet-derived growth factor receptor alpha (PDGFRA) gene. The mutation was what is known as a variant of uncertain significance, meaning it was not known if it caused a problem or not. Notably, this gene is not linked with any known lung disease in humans. However, the signaling pathways stimulated by PDGFRA control many important cellular processes such as cell growth, proliferation, and survival. PDGFRA protein signaling is important for the development of many types of cells throughout the body, and importantly, in the lungs.

With this clue, Sadreameli spoke with her multidisciplinary team at Johns Hopkins and reached out to experts beyond the institution. These experts agreed that she had a compelling hypothesis: the PDGFRA mutation could explain the lung disease Katja and Gregory shared. She applied for a Doris Duke grant, administered through Johns Hopkins, to study the unnamed disease the mother and son shared. Also, through her increasing involvement with Gregory and other patients with other forms of chILD, she proposed a new Children’s Center clinic to treat and better understand such rare interstitial lung diseases in children. Gregory would be leading the way.

She didn’t need to – the grant was awarded in July. With the blessings of pediatric pulmonary director Peter Mogayzel, Sadreameli began forming the clinic through consultation with colleagues and mentors like neonatologist Larry Nogee, whose research focuses on genetic causes of neonatal lung disease and childhood interstitial lung disease, and Enid Neptune, an adult pulmonologist and researcher whose lab is collaborating with Sadreameli on PDGFRA research. The challenges? Prognosis varies among the subgroups of interstitial lung diseases, some of which are notoriously resistant to therapy and have complications ranging from worsening hypoxia to pulmonary hypertension and infections. More-effective therapeutic solutions, Sadreameli and her pool of experts agree, could come from both the care and intense study of patients like Gregory with aspects of respiratory disease that do not fit into an obvious pattern of a named disorder.

“It’s a clinical research initiative that could open the door to understanding new ways children can get lung disease,” says Sadreameli. “There may be other children like Gregory in the future. If we identify the problem, that could be huge and lead to the discovery of a new disease.”

“I think it’s exciting to have someone like Christy and the pulmonary division willing to start a clinic,” says Nogee, noting that few pulmonologists see these patients consistently. “This is a nice translational research interface. There will be some exciting therapies that come along for these children in the next several years.”

In addition, clinic patients are eligible to be enrolled in the Childhood Interstitial Lung Disease research network of which the Children’s Center is now a site. The network includes disease specific information, descriptions of diagnostic testing, and tips for living with ILD.

“The registry will allow us to collect clinical information, organize it, and have some idea of the natural history of these patients,” says Nogee. “It will also help as we develop therapies – we’ll want to know where these kids are and which might benefit from new treatments.”

“A clinical program with a research component for these patients and families is an obvious idea for Johns Hopkins,” adds Sadreameli.

Gregory, a fan of geography, math and science, and his mother are fully on board. They’ve experienced the disease distinctions in each other – while Gregory’s disease progression was much faster than Katja, she was far more chronically ill and more frequently in the hospital than he was – and through shock, grief and acceptance, they’ve taught and learned from each other.

“I can anticipate the accommodations he will need – I’ve been there,” says Katja. “I know how we’re going to work around this and what tests he’s going to have. And through Gregory, I am learning more about my own health.”

“She makes me feel like I’m not alone,” says Gregory.

“On the flip side I can pick up his symptoms before he can, which I think irritates him a little bit,” says Katja.

They have become champions for each other and now Sadreameli through her care and the journey they share.

“She is really the best of both worlds – a doctor who is interested from a scientific standpoint and also emotionally connected and invested,” says Katja. “I’m excited to see how she can help Gregory and how we can help people in the future. It’s not like there’s a solution today but we’ve planted a seed.”