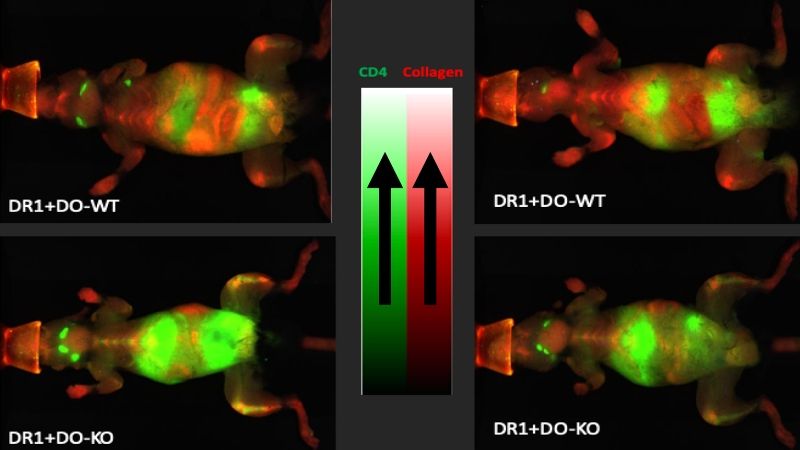 Fluorescent radiography images of two wild type (WT, or normal) mice on top and two knockout (KO) mice on bottom. The KO mice are bred without a gene that produces a chaperone protein for protecting against immune activity on healthy cells. The presence of helper T cells and collagen is indicated by the green and orange signals, respectively. KO mice (bottom two images) show higher levels of collagen reactive helper T cells in the joints of the legs, indicating immune activity against collagen, a fibrous protein, and showing that collagen-induced arthritis, a mouse autoimmune disorder, has occurred. Credit: Johns Hopkins Medicine

Like a parent of teenagers at a party, Mother Nature depends on chaperones to keep one of her charges, the immune system, in line so that it doesn’t mistakenly attack normal cells, tissues and organs in our bodies. A recent study by Johns Hopkins Medicine researchers has demonstrated that in mice — and probably humans as well — one biological chaperone may play a key role in protection from such attacks, known as autoimmune responses, which are a hallmark of diseases such as multiple sclerosis, rheumatoid arthritis, systemic lupus erythematosus and type 1 diabetes.

The researchers detailed their study in a paper published on Feb. 18, 2020, in the journal PLOS Biology.

“Short protein fragments, known as peptides, that come from bacteria, viruses and other pathogens act as antigens to trigger our immune system to remove the invaders, a process that depends on other proteins acting and interacting in a specific sequence of events,” says Scheherazade Sadegh-Nasseri, Ph.D., professor of pathology at the Johns Hopkins University School of Medicine and senior author of the paper. “In our mouse study, we have shown that a specific disruption in this regimen can redirect the immune system to turn against a healthy body — something that we believe also is likely occurring in humans.”

In their effort to identify this “chaperone disruption,” the researchers relied on the fact that for a mammal’s immune system to trigger a response, antigenic peptides must be exposed, or “presented,” to immune cells known as T lymphocytes, or T cells. This is achieved when the protein fragments attach to a molecule called major histocompatibility complex II, or MHC II, that sits on the surface of a white blood cell known as an antigen presenting cell, or APC.

Immature T cells are biologically attracted to these presented antigens, which are called epitopes. If the T cell has a receptor on its surface with a shape that conforms to the antigen — akin to fitting a key into a lock — it latches on and triggers the T cell’s maturation into what is called a helper T cell (also known as a CD4 T cell).

These cells then kick the immune response into high gear, helping to fight the internal war against foreign invaders by activating other immunity soldiers — B cells, macrophages and “killer” T cells — to secrete antibodies, digest and destroy microbes, and remove infected cells, respectively.

Once activated, the immune system remembers the antigen for a faster response to future attacks by the same infectious agent.

Two chaperone proteins in humans — DO and DM — work together to assist the presentation of antigens so that the immune system correctly determines that they are foreign and not normal, healthy components of the body. While previous research has provided a good understanding of DM’s role in this process, the function of DO has remained unclear until now.

To better define DO‘s involvement in immunity and autoimmunity, Sadegh-Nasseri and her colleagues focused on H2-O, the chaperone protein in mice that is comparable to DO in humans.

“Based on our previous studies, we knew that DM and DO collaborate to ensure that the best-fitting antigenic epitope is selected to bind to MHC II, allowing for the most potent recognition by helper T cells,” says doctoral candidate Robin Welsh, who is co-lead author of the PLOS Biology paper with colleague Nianbin Song, Ph.D. “However, the extent of DO’s contribution to this collaboration — and what would happen if it didn’t function as intended — was undetermined. So, we studied the mouse version of this process to get clues as to what might be happening in humans.”

In their first experiment, the researchers extracted B cells from normal mice and “knockout” mice bred without the gene that produces the H2-O chaperone protein. From these cells, they isolated peptides from the mouse equivalent of MHC II, known as 1-Ab molecules, and found that the peptides recovered from normal mice were stronger binders than those from the animals lacking H2-O.

“These results provide evidence that H2-O in mice, and likely DO in humans, may be helping select the stronger binding peptides — the ones targeted as being from antigens — for presentation, ensuring that the immune response is highly specific,” Welsh explains.

“Furthermore, since the lack of H2-O means poor scrutiny in selecting the best fitting epitopes, this may adversely affect the ‘learning process’ immature T cells undergo in the thymus so that they can recognize which proteins are considered self,” she adds.

Building on these findings, the researchers next looked to see whether the absence of H2-O would disrupt normal helper T cell function and cause an autoimmune reaction. To do this, they injected collagen, a fibrous protein normally responsible for wound repair, into their normal and knockout mice to sensitize the mouse immune systems to it. The researchers found that without H2-O, collagen was mistakenly presented as an antigen.

Using a fluorescent marker to detect helper T cells and broken-down collagen in the joints of the mice, the researchers found much higher amounts of both in the knockouts versus the normal mice. This was a sign of immune activity against the connective tissue protein — and characteristic of collagen-induced arthritis, or CIA, a laboratory induced autoimmune disease in mice used to model rheumatoid arthritis in humans.

“This is a significant finding because rheumatoid arthritis in humans is thought to be caused by a similar mechanism where the synovial membrane in the joints — which contains collagenous tissue — is incorrectly attacked as foreign,” says Sadegh-Nasseri.

Finally, the researchers used mice to see if the lack of H2-O could also be tied to experimental autoimmune encephalomyelitis, or EAE, a laboratory-induced autoimmune disorder in rodents that is similar to multiple sclerosis in humans.

Both normal and H2-O knockout mice were first immunized with myelin oligodendrocyte glycoprotein (MOG), a structural component of the myelin sheath that surrounds nerve cells, both protecting them and facilitating the transmission of electrical impulses between the brain and body. The researchers wanted MOG to be presented by the 1-Ab molecules to determine how both types of immune systems, with and without the H2-O chaperone, would respond.

The researchers again used a fluorescent marker to detect an autoimmune response, but this time against the myelin sheath. Again, the knockout mice without H2-O showed more glowing traces of myelin removed from the nerves (a process known as demyelination) than in the normal mice. An examination of brain-infiltrating immune cells taken from the knockout mice revealed large numbers of helper T cells with a strong affinity for MOG. This suggests that the immune systems in these animals incorrectly see myelin as foreign and target nerve cells for attack.

By linking the absence of a key chaperone protein, H2-O, with two different experimental autoimmune disorders in mice, Sadegh-Nasseri, Welsh, Song and their colleagues say this points to a similar impact in humans if DO is not present to keep the immune system focused on true invaders.

“We know that DO evolved later than DM in warm-blooded mammals, so perhaps DO’s chaperoning role was nature’s solution for preventing autoimmune disorders,” Sadegh-Nasseri says. “Better understanding of this role could lead to improved diagnostic techniques and therapies for such diseases.”

Funding for the study was provided by grants from the National Institute of Allergy and Infectious Diseases (R21AI101987 and R01AI120634) and the American Association of Immunologists Careers in Immunology Fellowship Program.