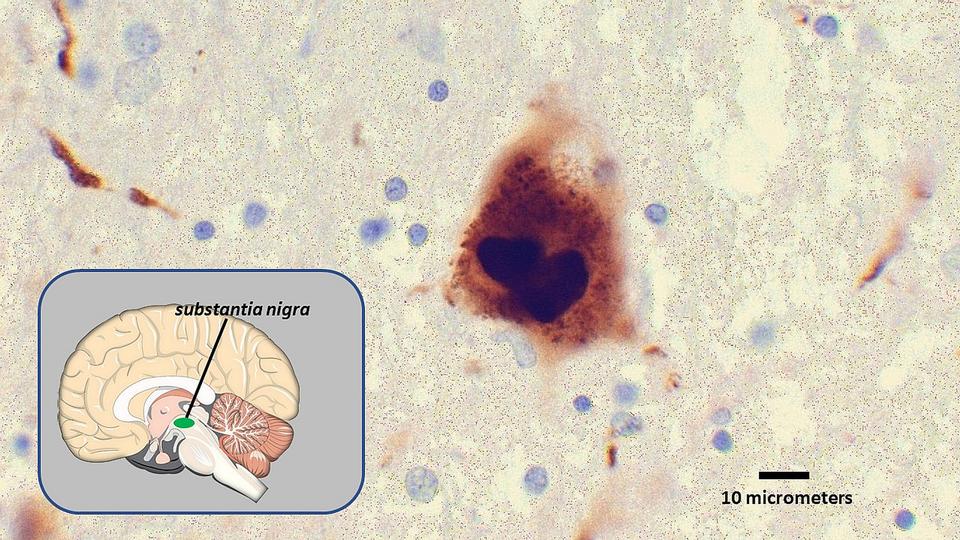 Photomicrograph showing a Lewy body (center), a clump of misfolded alpha-synuclein proteins believed to be a factor in Parkinson’s disease. The inset shows the location of the substantia nigra, an area of the brain that influences movement and cognition, where this Lewy body was found. A Johns Hopkins Medicine team has developed an artificial enzyme that stops misfolded alpha-synuclein from spreading and may lead to a therapy for Parkinson’s. Credit: Graphic created by M.E. Newman, Johns Hopkins Medicine, using public domain images

A growing body of research has shown that misshapen and misfolded alpha-synuclein, the protein culprit behind Parkinson’s disease and its characteristics, travels from the gut to the brain, where it spreads and sticks together in lethal clumps known as Lewy bodies. As these clumps accumulate, they cause brain cell death.

Now, Johns Hopkins Medicine researchers have created an artificial enzyme that stops misfolded alpha-synuclein from spreading and could become the basis for a new treatment for Parkinson’s disease.

The results were announced in a study published online Nov. 20, 2020, in the journal Nano Today.

The artificial enzymes, nanosized (a nanometer is a billionth of a meter) combinations of platinum and copper called PtCu bimetallic nanoalloys, were created by the research team for their strong antioxidant properties. The antioxidant capability is dependent largely on the alloy composition.

“Oxidative stress caused by reactive oxygen species is inescapable, and increases with age due to mechanistic slowdowns in processes such as protein degradation,” says senior study researcher Xiaobo Mao, Ph.D., assistant professor of neurology at the Johns Hopkins University School of Medicine. “This indicates the importance of antioxidants, because in Parkinson’s disease, roaming reactive oxygen species promote the spread of misfolded alpha-synuclein, leading to worse symptoms.”

The study used a research method known as the alpha-synuclein preformed fibril model, which replicates the pathology, spreading and neurodegeneration resulting from Lewy bodies. The nanozyme was found to decrease alpha-synuclein induced pathology and inhibit neurotoxicity, in addition to decreasing reactive oxygen species. The nanozyme also prevented alpha-synuclein from passing from cell to cell, and from the substantia nigra to the dorsal striatum, two areas in the midbrain that influence movement and cognition.

Mao has long collaborated with fellow Parkinson’s disease expert Ted Dawson, M.D., Ph.D., professor of neurology and director of the Institute for Cell Engineering at the Johns Hopkins University School of Medicine. Dawson recently added to evidence that misfolded alpha-synuclein travels along the vagus nerve from the gut to the brain. Mao hopes that further research can connect the two findings and lead to a Parkinson’s disease treatment that targets the gut.

Mao is available for interviews.