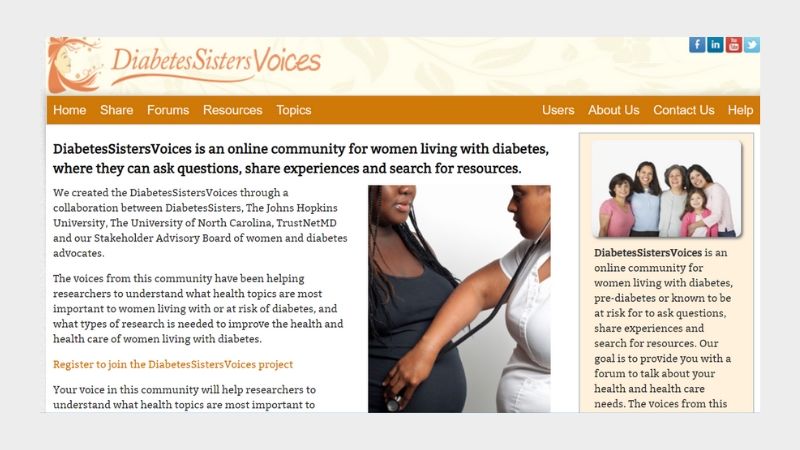 Johns Hopkins Medicine researchers created an online patient community for women living with all types of diabetes to test whether online communities can engage patients and provide information that can guide research and patient care. The researchers found that the majority of women who joined the online community used it at least occasionally to ask or respond to questions and ideas about research as well as patient care.

In a report published in May in the Journal of Medical Internet Research, the researchers say their work shows that online patient communities are not only practical ways to promote mutual support among patients regarding their care challenges, but also to help identify patient-centered research priorities.

“Our study adds to evidence that web-based patient communities can engage people perhaps more broadly and efficiently than some traditional means of communication, such as in-person meetings and focus groups,” says Wendy Bennett, M.D., M.P.H., senior author of the report and associate professor of medicine in the Division of General Internal Medicine at the Johns Hopkins University School of Medicine. “Previous studies have shown that online communities are helpful in providing patients with peer support, useful resources and knowledge. Now, we have demonstrated a way to embark on conversations that inspire research questions to ultimately improve women’s experiences with health care.”

Why Women? Why Diabetes?

The investigators focused on diabetes among women for their project because the U.S. Centers for Disease Control and Prevention say some 15 million women in the United States have diabetes, with the vast majority of them diagnosed with type 2 diabetes, a disorder marked by the chronic inability to regulate blood sugar due to insulin resistance. Women with type 1 diabetes are generally diagnosed younger in life and have an autoimmune disorder causing inability to make insulin. Both groups are at higher risk than men with diabetes for such serious complications as blindness, kidney disease and depression. Particulars regarding women’s health, such as pregnancy and menopause, add to the list of unique disease management issues for women with diabetes. These differences have fueled calls for sex-specific research.

Talk to Me, Sister

Partnering with the national nonprofit diabetes organization for women, DiabetesSisters, the research team created and launched the DiabetesSistersVoices website in 2016. The online patient community invites women with diabetes to post questions, share experiences, respond to posts and search for resources. An online moderator who also lives with diabetes monitors chat discussions, welcomes participants, and sends out weekly emails with topics such as whether patients should use the first or second drop of blood to measure blood sugar level, and their experiences with birth control pills.

The investigators used newsletters, posters, social media and online announcements over an eight-month period across the country from November 2016 to June 2017 to recruit participants. More than 330 adult women in the United States who self-described as having a diagnosis of diabetes joined the online community. The average age of participants was 51. Among the women, 86.5% were white and 6.3% were black. The majority (76.2%) had type 1 diabetes, and the rest had type 2 diabetes.

Over the eight months, the researchers used a commercial web analytic service to track how actively the group posted to the site with comments, questions or suggestions. More than 40% of patients posted on the site at least once during the study period. Some 36% logged onto the website at least once but never posted. The rest of the patients never logged on after enrolling in the study. Patients were most active during the enrollment period’s first 10 weeks.

Most participants said they were “satisfied” with aspects of their experience such as logging in, posting questions, searching for resources, and the selection of weekly topics sent by the site moderator via email.

What Did We Learn?

“Part of what we learned is that there are many questions that patients might not feel comfortable asking their providers face to face and would rather ask of patients like themselves, such as issues in relationships” says Bennett. “Online communities allow us to identify these topics and use them to guide research priorities.”

Researchers detailed the topics identified though this online community in a separate report published July 1, 2017, on the website of the Patient-Centered Outcomes Research Institute. Some topics that were most discussed include coping strategies to improve mental health, diabetes complications, and nutrition and diet issues.

Bennett says the site could also be used to quickly disseminate new research findings that people can use to inform their care.

The investigators cautioned that the pilot study involved a relatively small group of women, and it did not fully represent the vast majority of women with diabetes — those with type 2 disease or those with pre-diabetes. Nor did the makeup of the participant group reflect the soaring prevalence of type 2 diabetes among African American and other minority women.

“We were pleased that patients were generally active on our online platform, but we need to find better strategies to keep patients engaged after the first 10 weeks of enrollment, and to learn more about why most of the participants did not engage,” says Peijin Han, M.H.S., first author of the study report. A project coordinator at the time of the study, Han is a research fellow in the radiation oncology department at the Sydney Kimmel Comprehensive Cancer Center at Johns Hopkins and in the molecular radiation sciences division at the Johns Hopkins University School of Medicine.

Other authors of the study include Wanda Nicholson, M.D., M.P.H., from the Department of Obstetrics and Gynecology and the Obesity and Diabetes Core at the University of North Carolina School of Medicine; Anna Norton, M.S., and Karen Graffeo from DiabetesSisters; and Richard Singerman, Ph.D., and Steven King from TrustNetMD.