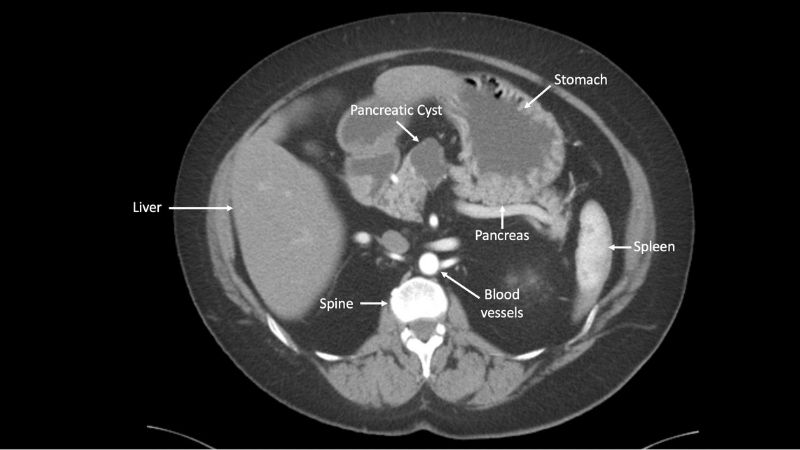 In a proof-of-concept study, an international scientific team led by Johns Hopkins Kimmel Cancer Centerresearchers has shown that a laboratory test using artificial intelligence tools has the potential to more accurately sort out which people with pancreatic cysts will go on to develop pancreatic cancers.

The test, dubbed CompCyst (for comprehensive cyst analysis), incorporates measures of molecular and clinical markers in cyst fluids, and appears to be on track to significantly improve on conventional clinical and imaging tests, the research team says.Using information from more than 800 patients with pancreatic cysts who had cyst fluid analysis and cyst removal surgery at The Johns Hopkins Hospital and 15 other medical centers around the world, investigators say CompCyst more often than standard current methods correctly identified which patients needed and likely had a chance to benefit from surgery, and which were unlikely to benefit from surgery or needed further monitoring only. Specifically, they found that using the test would have spared from surgery more than half of patients who underwent cyst removal later deemed unnecessary because the cysts were unlikely to have caused cancer.

A description of the work is published in the July 17 issue of Science Translational Medicine.

“Our study demonstrates the potential role of CompCyst as a complement to existing clinical and imaging criteria when evaluating pancreatic cysts,” says Anne Marie Lennon, M.B.B.Ch., Ph.D., professor of medicine and director of the Johns Hopkins multidisciplinary pancreatic cyst clinic. “It could provide a greater degree of confidence for physicians when they advise patients that they do not require follow-up and can be discharged from surveillance.”

“Although we still need to prospectively validate this test, our results are exciting because they document a new and more objective way to manage the many patients with this disease,” she adds. Plans are underway to begin a prospective validation study in the next year.

Pancreatic cysts are common. They are found in 4% of people in their 60s and 8% of people over age 70, according to other published research. That means some 800,000 people with a pancreatic cyst are identified each year in the U.S. alone. By contrast, only a small fraction of cysts progress to cancer.

“The dilemma facing patients and their physicians is the ability to distinguish precancerous cysts from cysts that will not progress to cancer,” says Lennon.

“Currently available clinical and imaging tests often fail to distinguish precancerous cysts from cysts that have little or no potential to turn cancerous, which makes it difficult to determine which patients will not require follow-up and which patients will need long-term follow-up or immediate surgical resection,” says study investigator Christopher Wolfgang, M.D., Ph.D., M.S., John L. Cameron Professor of Surgery, director of surgical oncology at the Johns Hopkins Kimmel Cancer Center and co-director of the Johns Hopkins Precision Medicine Center of Excellence for Pancreatic Cancer. “As a result, essentially all people diagnosed with a cyst are followed long-term. Surgeons are faced with making recommendations to patients based on the risks and benefits of surgery with limited information. We seldom miss a cancer, but it is at the expense of performing an operation that in hindsight may not have been necessary.  This study directly addresses these fundamental problems in management of pancreatic cysts.”

In the study, the precise nature of the cysts examined was confirmed through histopathological analysis of resected surgical specimens. The cysts were then classified into three groups: those with no potential to turn cancerous, for which patients would not require periodic monitoring; mucin-producing cysts that have a small risk of progressing to cancer, for which patients can receive periodic monitoring for progression to possible cancer; and cysts for which surgery is recommended because there is a high likelihood of progression to cancer.

The CompCyst test, developed by the Johns Hopkins Kimmel Cancer Center-led investigators, was created with patient data including clinical impressions and symptoms, images from CT scans and molecular features such as DNA alterations within cyst fluid.

In the study, the researchers evaluated the molecular profiles, including DNA mutations and chromosome changes, of a large number (862) of pancreatic cysts. They then fed the molecular information, along with clinical and radiologic data, into a computer-based program that used artificial intelligence to classify patients into the three groups noted previously.

Based on histopathological analysis of the surgically resected cysts, the researchers found that surgery was not needed for 45% of the patients that underwent surgery for their cysts. This unnecessary surgery was performed because the clinicians could not determine if the cysts were dangerous. In these patients, if CompCyst had been used, the researchers estimated that 60% to 74% of the patients (depending on the cyst type) could have been spared these unnecessary surgeries.

The study had several limitations, the researchers note, including that pancreatic cyst fluid was obtained at the time of surgery, and that the cysts evaluated are more atypical than those seen in routine clinical practice.

“We think CompCyst has the capacity to substantially reduce unnecessary surgeries for pancreatic cysts. Over the next five years, we hope to use CompCyst in many more patients with cysts in an effort to guide surgical treatment — to determine when surgery is needed and when it is not needed — and evaluate how well the test performs,” says Bert Vogelstein, M.D., Clayton Professor of Oncology, co-director of the Ludwig Center at the Johns Hopkins Kimmel Cancer Center and a Howard Hughes Medical Institute investigator.

Papadopoulos, Kinzler and Vogelstein are founders of Personal Genome Diagnostics and Thrive Earlier Detection Corp. Vogelstein is a member of the scientific advisory boards of Eisai-Morphotek, Sysmex Inostics, Nexus Strategy (Camden Partners), NeoPhore and CAGE. Some of these companies, as well as others, have licensed technologies from Johns Hopkins, and Papadopoulos, Kinzler, Lennon, Springer, Douville, Dal Molin and Vogelstein may receive equity or royalties from these licenses. The terms of these arrangements are managed by The Johns Hopkins University in accordance with its conflict of interest policies.