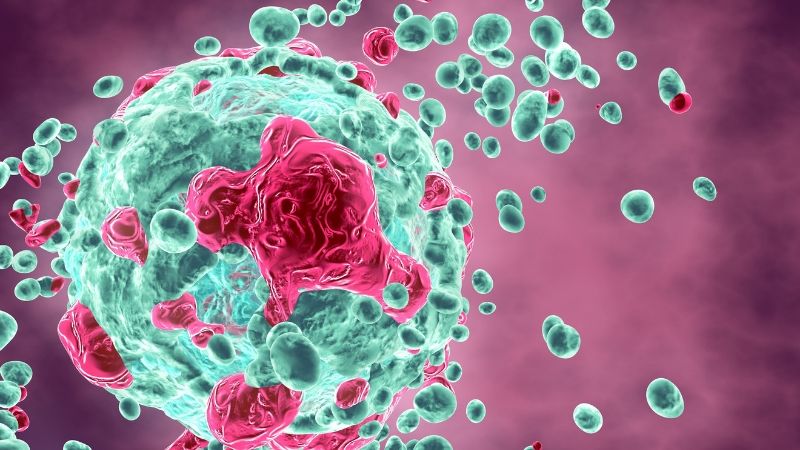 Delivering two federally approved immunity-altering drugs together significantly extended the lives of mice injected with human ovarian cancer cells, an early proof-of-concept experiment that may advance treatment for the most deadly — although rare — gynecologic malignancy in humans, according to scientists at the Johns Hopkins Kimmel Cancer Center who performed the research.

The combination treatment appears to improve survival by changing the natural ratio of different types of immune system “clean up” cells called macrophages, a therapy target that’s received less attention than other immune system components but could hold promise for patients with various types of malignancies, the investigators say

“Together these drugs could one day make some headway where other therapies have failed,” says study leader Cynthia Zahnow, Ph.D., associate professor of oncology at the Johns Hopkins Kimmel Cancer Center.

A report on the findings was published online in the July issue of Cancer Research.

Over the past decade, Zahnow notes, several cancer clinical trials have shown promise for a class of drugs known as epigenetic therapies, which remove chemical groups on DNA and proteins that affect the activity of cancer-related genes. Although the drugs mainly battle cancer by returning the function of cancer-fighting genes that have become suppressed by the disease itself, researchers have also discovered that the drugs may trigger an anti-viral, immune response that may help the body attack tumors.

A different class of drugs, known as polyamine-blocking therapies, has also shown potential in inhibiting tumor growth in animal models by preventing the synthesis and/or transport of molecules necessary for cancer cells to thrive. These agents also affect the immune system, with studies showing that they alter the makeup of immune cell populations in tumor microenvironments.

However, Zahnow says neither class of drugs alone has been shown effective against ovarian cancer, a disease that kills about 20,000 women per year in the U.S. even though it accounts for only 3% of cancers in women.

Because both drug classes alter immune cell behavior, Zahnow, co-study leader Robert Casero Jr., Ph.D., professor of oncology, and their colleagues reasoned that they could be more effective at fighting ovarian cancer when combined.

The researchers tested this idea in a mouse model in which the animals’ abdominal cavities were injected with human ovarian cancer cells to generate disseminated disease often seen in women with ovarian cancer. Over the course of several weeks, the rodents developed ascites, or fluid collections in their abdomens full of cancer and immune cells, as a consequence of cancer progression. By sampling the fluid weekly, the researchers obtained a window on tumor growth and immune activity simultaneously over time.

In a set of experiments, three days after the mice were injected with cancer cells, the researchers put the mice on one of four treatment regimens: injections of saline (as a “control” treatment); an epigenetic drug known as 5-azacytidine (AZA); a polyamine-blocking drug known as 2-difluoromethylornithine (DFMO); or a combination of AZA and DFMO. Currently, AZA is FDA approved to treat a bone marrow disorder known as myelodysplastic syndrome, and DFMO is FDA-approved for African sleeping sickness.

Their results showed that mice that received the single agents lived slightly longer compared with mice that received just saline — an average of 44 days after they were injected with cancer cells. However, mice treated with the combination therapy lived about 25% longer, to 59 days.

Examining cancer and immune system cells present in the animals’ ascites showed that the drug combination had no effect on most immune cell types compared with treatment with the single agents. However, there were two exceptions.

They found increases in cytotoxic lymphocytes, a type of white blood cell, including both T cells and natural killer cells, which are tumor-fighting immune system cells, but Zahnow said the effect didn’t seem large enough to explain the significant increase in survival of the treated mice.

More importantly, they said, they found a greater change in the ratio of two types of macrophages, immune cells that digest foreign material and cell debris while regulating other immune processes. Previous studies have shown that M1 macrophages can protect against tumor growth and progression, while M2 macrophages promote tumor growth.

While the combined treatment greatly reduced the total number of macrophages, it left more M1 macrophages than M2. When the researchers blocked the activity of all macrophages with an antibody that inhibits them, the combination therapy lost its survival effect, demonstrating the importance of this M1 population of immune cells to fight the cancer.

Zahnow says the combination therapy is especially promising because of the significant boost it gave to the animals’ survival, but also because both agents are already approved for use to treat other conditions. “DFMO is so nontoxic that it also could provide a buffer in patients’ drug regimens that would help them add other potent medications with more significant side effects,” says Zahnow. Such regimens might include medications that could further offset the balance between M1 and M2 macrophages as a patient’s disease returns or progresses, hallmarks of ovarian cancer.

The team is currently testing combined AZA and DFMO therapy in other animal models of cancer in which macrophages play a prominent role, including breast and pancreatic cancers.