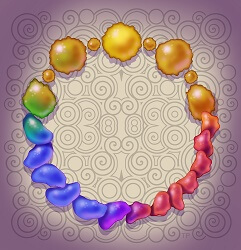 Researchers have found a way to tweak cells’ movement patterns to resemble those of other cell types. Credit: Tim Phelps/Johns Hopkins University

Johns Hopkins researchers report they have uncovered a mechanism in amoebae that rapidly changes the way cells migrate by resetting their sensitivity to the naturally occurring internal signaling events that drive such movement. The finding, described in a report published online March 28 in Nature Cell Biology, demonstrates that the migratory behavior of cells may be less “hard-wired” than previously thought, the researchers say, and advances the future possibility of finding ways to manipulate and control some deadly forms of cell migration, including cancer metastasis.

“In different tissues inside the body, cells adopt different ways to migrate, based on their genetic profile and environment,” says Yuchuan Miao, a graduate student at the Johns Hopkins University School of Medicine and lead author of the study. “This gives them better efficiency to perform specific tasks.” For example, white blood cells rhythmically extend small protrusions that allow them to squeeze through blood vessels, whereas skin cells glide, like moving “fans,” to close wounds.

On the other hand, Miao notes, uncontrolled cell migration contributes to diseases, including cancer and atherosclerosis, the two leading causes of death in the United States. The migration of tumor cells to distant sites in the body, or metastasis, is what kills most cancer patients, and defective white blood cell migration causes atherosclerosis and inflammatory diseases, such as arthritis, which affects 54 million Americans and costs more than $125 billion annually in medical expenditures and lost earnings.

Because cells migrate in different ways, many drugs already designed to prevent migration work only narrowly and are rarely more than mildly effective, fueling the search for new strategies to control migratory switches and treat migration-related diseases, according to senior author Peter Devreotes, Ph.D., a professor and director of the Department of Cell Biology at the Johns Hopkins University School of Medicine’s Institute for Basic Biomedical Research.

“People have thought that cells are typed by the way they look and migrate; our work shows that we can change the cell’s migrating mode within minutes,” adds Devreotes.

For the new study, Devreotes and his team focused on how chemical signaling molecules activate the motility machinery to generate protrusions, cellular “feet” that are a first step in migration. To do this, they engineered a strain of Dictyostelium discoideum, an amoeba that can move itself around in a manner similar to white blood cells. The engineered amoebae responded to the chemical rapamycin by rapidly moving the enzyme Inp54p to the cell surface, where it disrupted the signaling network. The cells also contained fluorescent proteins, or “markers,” that lit up and showed researchers when and where signaling molecules were at work.

Experiments showed that the engineered cells changed their migration behavior within minutes of Inp54p recruitment. Some cells, which the researchers termed “oscillators,” first extended protrusions all around the cell margins and then suddenly pulled them back again, moving in short spurts before repeating the cycle. Fluorescent markers showed that these cycles corresponded to alternating periods of total activation and inactivation, in contrast to the small bursts of activity seen in normal cells.

Other cells began to glide as “fans,” with a broad zone of protrusions marked by persistent signaling activity.

Devreotes describes the signaling behavior at the cell surface as a series of waves of activated signaling molecules that switch on the cellular motility machinery as they spread. In their normal state, cells spontaneously initiated signaling events to form short-lived waves that made small protrusions.

In contrast, oscillators had faster signaling waves that reached the entire cell boundary to generate protrusions before dying out. Fans also showed expanded waves that continually activated the cell front without ever reaching the cell rear, resulting in wide, persistent protrusions.

The scientists say their experiments show that the cell movement changes they saw resulted from lowering the threshold level of signaling activity required to form a wave. That is, cells with a lower threshold are more likely to generate waves and, once initiated, the activation signals spread farther with each step.

Devreotes says the team’s experimental results offer what appears to be the first direct evidence that waves of signaling molecules drive migratory behavior. Previously, his laboratory showed a link between signaling and migration, but had not specifically examined waves.

In further experiments, Devreotes and his team found that they could recruit different proteins to shift cell motility, suggesting, he says, that altering threshold is a general cell property that can change behavior—no matter how cells migrate. His team was also able to restore normal motility to fans and oscillators by blocking various signaling activities, suggesting new targets for drugs that could be designed to control migration.

Devreotes cautions that what happens in an amoeba may not have an exact counterpart in a human cell, but studies in his lab suggest that something like the wave-signaling mechanism they uncovered operates in human cells as well.

Other researchers who contributed to the study are Sayak Bhattacharya, Marc Edwards, Takanari Inoue, and Pablo Iglesias of Johns Hopkins University and Huaqing Cai of the Chinese Academy of Sciences in Beijing.