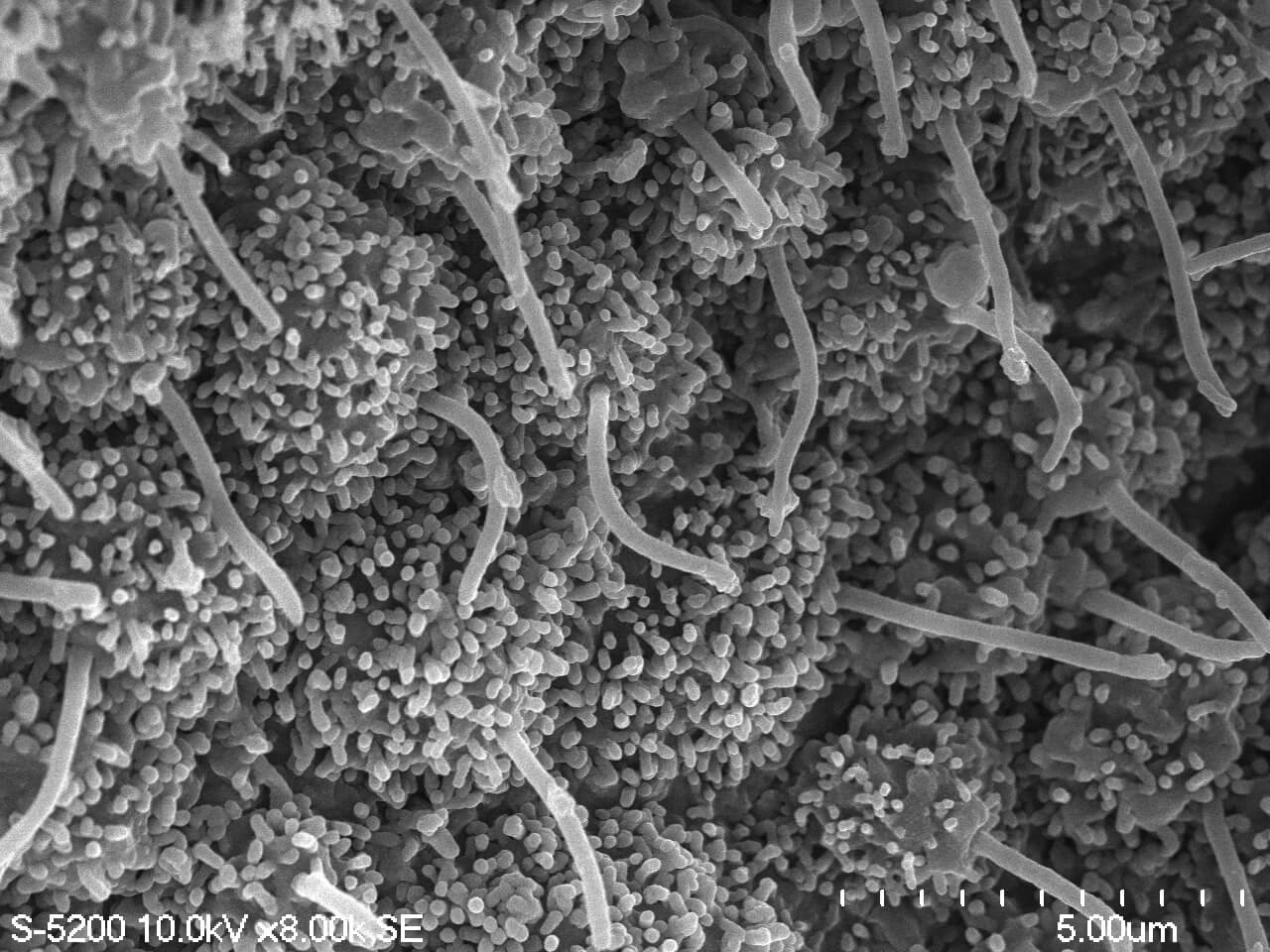 Scientists at Johns Hopkins Medicine and the National Tsing Hua University in Taiwan say they have found a fast way to manipulate a cell’s cilia, the tiny, fingerlike protrusions that “feel” and sense their microscopic environment. The experiments, performed in mouse cells, may advance scientists’ efforts to not only understand how the nanosized antennae work, but also how to repair them.

A report of their findings appeared online April 30 in Nature Communications.

With few exceptions, most cells in the body have cilia or can grow them. The tiny antenna sense chemicals such as hormones and growth factors, which regulate cell health and growth. Cilia also detect mechanical and physical cues in the body, such as light, gravity, sound and the flow of blood and urine.

When cilia malfunction, a range of human diseases and conditions can occur. For example, problems with cilia in kidney cells can cause polycystic kidney disease, an incurable condition in which fluid-filled cysts interfere with kidney function and which is conventionally treated with dialysis.

Because cilia are so small — 10,000 times smaller than a cell — scientists have long found it challenging to squeeze their tools into such tight spaces to study them.

“When I was a postdoc, a colleague in a neighboring laboratory was studying cilia, and I hoped that by combining his knowledge of the biology of cilia with my expertise in cellular engineering, we could figure out how to manipulate cilia within their tiny spaces,” says Takanari Inoue, Ph.D., professor of cell biology at the Johns Hopkins University School of Medicine and an author of the new report.

After years of work, he says they figured out a way to manipulate a chemical signaling pathway within cilia that controls how molecules are shuttled up and down the length of the tiny structure.

To do it, Inoue and his colleagues in Taiwan used a tool called chemically inducible dimerization, which they say is faster than efforts to manipulate the pathway by rewriting the cilia’s genetic code. The tool, essentially, is a matchmaker — it helps to mesh two specific chemicals together at specific sites within a living cell.

For the new study, Inoue and his colleagues added a protein called FRB to cells from mice grown in the laboratory. The FRB protein is capable of glomming onto a rigid structure within cilia, called a microtubule, which acts as a railway, shuttling proteins up and down the length of cilia.

Then they added a molecule called FKBP to the cells, which is attached to an enzyme that acts as an eraser for a chemical modification in the cilia called glutamylation. The FKBP and enzyme pair floats around the cell until scientists add a chemical called rapamycin, which causes FKBP to get trapped at FRB molecules within the cilia.

Once inside the cilia, the enzyme attached to the FKBP molecule selectively erases the glutamylation modification inside the cilia. It also ignores other signaling pathways.

“We think our technique is faster than existing means of tracking cilia activity and enables scientists to access cilia parts faster and dive into specific chemical modifications for certain amounts of time,” says Inoue.

“Our STRIP system offers a new strategy for precisely controlling microtubule modifications in living cells. With this approach, it becomes possible to understand how microtubules regulate cellular functions and may also serve as a new way to treat human diseases in the future,” says Yu-Chun Lin, Ph.D., an assistant professor at the Institute of Molecular Medicine at the National Tsing Hua University in Taiwan.

Other diseases affected by flawed cilia include a brain disorder called Joubert syndrome, a kidney disorder called nephronophthisis, retinitis pigmentosa and a rare disorder called situs inversus, in which the internal organs of the body are in the reverse location of their normal position.

The scientists also found that microtubules in the mouse cells that are not located inside cilia were not affected when they tinkered with glutamylation.

Inoue and his colleagues also found that the genetic output of a developmental pathway called Hedgehog (which is connected to glutamylation) is decreased in cells treated with STRIP compared with their controls.

Inoue and his colleagues say they now plan to apply STRIP to human cells and look more closely at the molecular process of glutamylation in cilia. They may also use STRIP to control other chemical modifications within cilia.

Funding for the study was provided by the National Institutes of Health (GM105448, GM118082, R01DK102910), the Ministry of Science and Technology, Taiwan, Program for Translational Innovation of Biopharmaceutical Development-Technology Supporting Platform Axis-nMACS Imaging and the National Tsing Hua University.