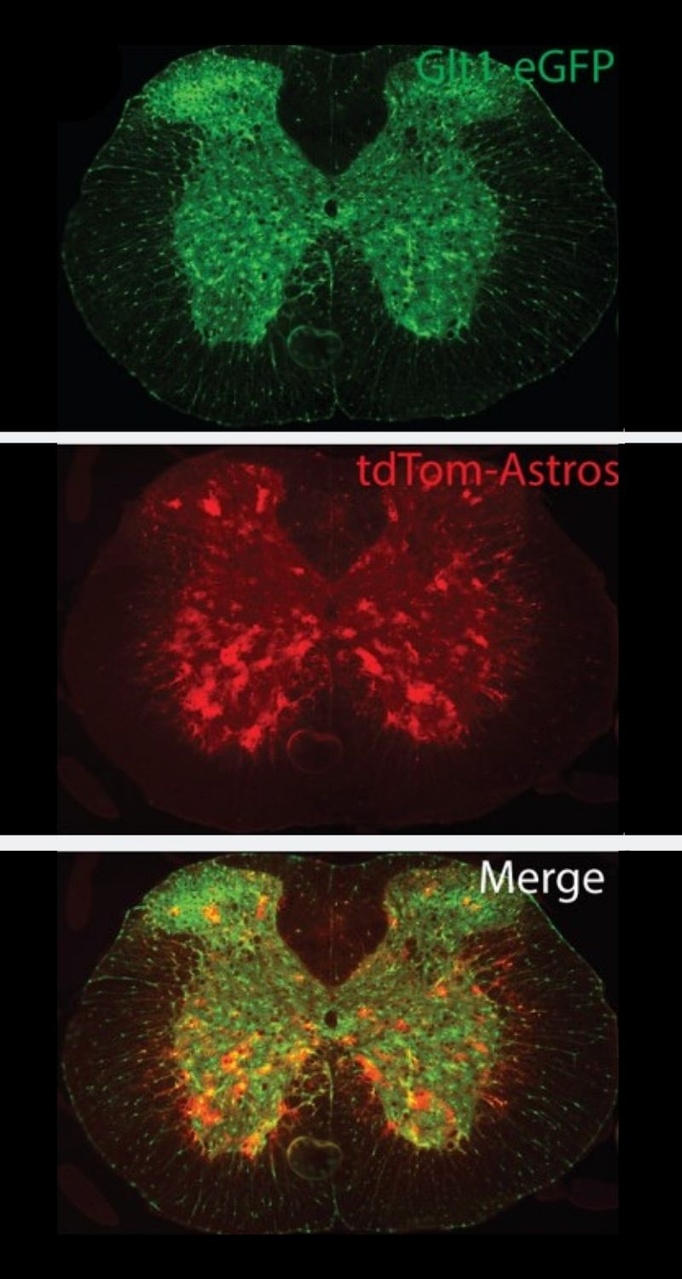 Red 8.3 astrocytes in the spine of a mouse. Credit: Rothstein lab

Working with mouse and human tissue, Johns Hopkins Medicine researchers report new evidence that a protein pumped out of some — but not all — populations of “helper” cells in the brain, called astrocytes, plays a specific role in directing the formation of connections among neurons needed for learning and forming new memories.

Using mice genetically engineered and bred with fewer such connections, the researchers conducted proof-of-concept experiments that show they could deliver corrective proteins via nanoparticles to replace the missing protein needed for “road repairs” on the defective neural highway.

Since such connective networks are lost or damaged by neurodegenerative diseases such as Alzheimer’s or certain types of intellectual disability, such as Norrie disease, the researchers say their findings advance efforts to regrow and repair the networks and potentially restore normal brain function.The findings are described in the May issue of Nature Neuroscience.

“We are looking at the fundamental biology of how astrocytes function, but perhaps have discovered a new target for someday intervening in neurodegenerative diseases with novel therapeutics,” says  Jeffrey Rothstein, M.D., Ph.D., the John W. Griffin Director of the Brain Science Institute and professor of neurology at the Johns Hopkins University School of Medicine.

“Although astrocytes appear to all look alike in the brain, we had an inkling that they might have specialized roles in the brain due to regional differences in the brain’s function and because of observed changes in certain diseases,” says Rothstein. “The hope is that learning to harness the individual differences in these distinct populations of astrocytes may allow us to direct brain development or even reverse the effects of certain brain conditions, and our current studies have advanced that hope.”

In the brain, astrocytes are the support cells that act as guides to direct new cells, promote chemical signaling, and clean up byproducts of brain cell metabolism.

Rothstein’s team focused on a particular astrocyte protein, glutamate transporter-1, which previous studies suggested was lost from astrocytes in certain parts of brains with neurodegenerative diseases. Like a biological vacuum cleaner, the protein normally sucks up the chemical “messenger” glutamate from the spaces between neurons after a message is sent to another cell, a step required to end the transmission and prevent toxic levels of glutamate from building up.

When these glutamate transporters disappear from certain parts of the brain –such as the motor cortex and spinal cord in people with amyotrophic lateral sclerosis (ALS) –glutamate hangs around much too long, sending messages that overexcite and kill the cells.

To figure out how the brain decides which cells need the glutamate transporters, Rothstein and colleagues focused on the region of DNA in front of the gene that typically controls the on-off switch needed to manufacture the protein. They genetically engineered mice to glow red in every cell where the gene is activated.

Normally, the glutamate transporter is turned on in all astrocytes. But, by using between 1,000- and 7,000-bit segments of DNA code from the on-off switch for glutamate, all the cells in the brain glowed red, including the neurons. It wasn’t until the researchers tried the largest sequence of an 8,300-bit DNA code from this location that the researchers began to see some selection in red cells. These red cells were all astrocytes but only in certain layers of the brain’s cortex in mice.

Rothstein’s team took neurons from normal mouse brains, treated them with Norrin, and found that those neurons grew more of the “branches” — or extensions — used to transmit chemical messages among brain cells. Then, Rothstein says, the researchers looked at the brains of mice engineered to lack Norrin, and saw that these neurons had fewer branches than in healthy mice that made Norrin.

In another set of experiments, the research team took the DNA code for Norrin plus the 8,300 “location” DNA and assembled them into deliverable nanoparticles. When they injected the Norrin nanoparticles into the brains of mice engineered without Norrin, the neurons in these mice began to quickly grow many more branches, a process suggesting repair to neural networks. They repeated these experiments with human neurons too.

Rothstein notes that mutations in the Norrin protein that reduce levels of the protein in people cause Norrie disease — a rare, genetic disorder that can lead to blindness in infancy and intellectual disability. Because the researchers were able to grow new branches for communication, they believe it may one day be possible to use Norrin to treat some types of intellectual disabilities such as Norrie disease.

For their next steps, the researchers are investigating if Norrin can repair connections in the brains of animal models with neurodegenerative diseases, and in preparation for potential success, Miller and Rothstein have submitted a patent for Norrin.

This work was funded by grants from the National Science Foundation Graduate Fellowship Research Program and the National Institute of Neurological Disorders and Stroke (R01NS092067, R01NS094239)