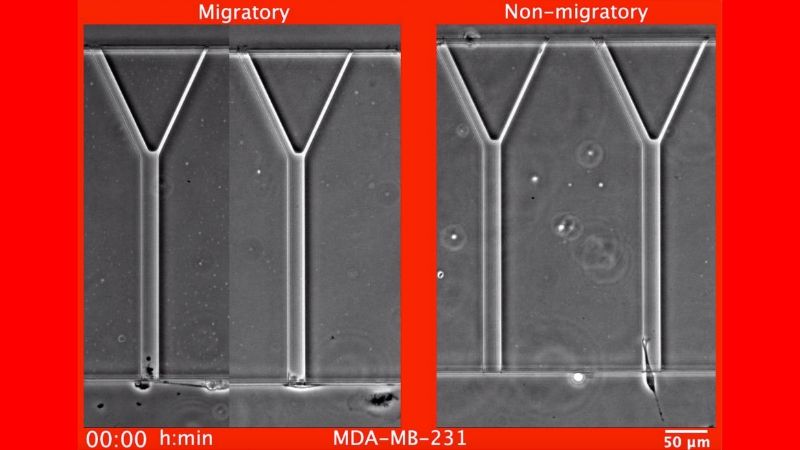 Researchers at The Johns Hopkins University and other institutions report that a new laboratory test that induces cancer cells to squeeze through narrow spaces has the potential to accurately predict which breast cancers and other solid tumors are likely to spread, or metastasize, to other sites. The test, they say, might also help clinicians select the best drugs to prevent cancer’s spread.

The team received a United States patent on the test, called Microfluidic Assay for quantification of Cell Invasion (MAqCI), which uses a device to assess three key features of metastasis: cancer cells’ ability to move, to compress in order to enter narrow channels and to proliferate. In laboratory experiments, the MAqCI device accurately predicted the metastatic potential of breast cancer cell lines and of patient-derived tumors grown in animals in a majority of specimens.

A description of the experiments is published online in the current issue of Nature Biomedical Engineering.

The challenge of predicting which patients with breast cancer will develop metastases — the hallmark of life-threatening disease — can lead to overtreatment of patients with benign disease, as well as inadequate treatment of more aggressive cancers, he says. “When a lump is detected in a patient’s body, the doctor can determine if the mass is benign or malignant through a biopsy, but they cannot really say with confidence if a malignant tumor is going to be highly aggressive and metastasize to other locations,” says Konstantopoulos.

Current technologies for the prediction or early detection of breast cancer metastasis rely on gene expression profiling and measurement of circulating tumor cells (CTCs) or circulating tumor DNA (ctDNA) shed by cancer cells. But by the time CTCs are detected, patients may have a limited lifespan, says Konstantopoulos. Gene expression tests measure the expression levels of a subset of genes linked to particular cancers to predict prognosis. However, it is unlikely that one lab test will be effective for all patients given that breast cancer progression can be caused by gene mutations in different biological pathways, at different checkpoints within the same pathway, or even because of different alterations within the same gene, he says. In addition, cells within each tumor are highly varied, and evidence suggests only a tiny fraction of cells within a primary tumor are capable of forming metastases.

Moreover, he says, “Although liquid biopsies or circulating tumor DNA measurements can be very good at monitoring a patient’s response to therapy after it is administered, they do not provide a means to help physicians select optimal drugs to prevent spread.”

In a bid to develop a test of metastatic potential that would fill in some of these gaps and be used in conjunction with current technologies, the investigators took advantage of a somewhat serendipitous finding, says Konstantopoulos. While he and his colleagues were studying the movement of nonmetastatic breast cancer cells through engineered environments consisting of Y-shaped channels of varying dimensions, they observed that these cells couldn’t enter the narrower sections of the device. “The ability to move and deform in order to enter narrow spaces is required by the metastatic tumor cells to be able to move from the primary tumor to a distant site within the patient’s body, while uncontrolled growth is also needed for the cells to colonize distant tissues.”

The dimensions of the Y-shaped microchannels were chosen to mimic aspects of the complexity and variety of the cross-sectional areas of tissue tracks found in or along different locations in the body, such as in the fibrillar interstitial tissues; in the nerve, muscle or epithelium; in bone cavities; and in the brain. The MAqCI device is placed onto the stage of an inverted microscope that has phase contrast and fluorescence imaging capabilities and is connected to a computer. Cell migration is monitored in real time via time-lapse phase contrast microscopy.

For the current proof-of-principle study, Konstantopoulos and colleagues first took cells from 25 different human breast cancer cell lines and put them in the device, finding that breast cancer cell lines already known to be metastatic had a larger than threshold percentage of cells that could compress and fit through narrower channels in the device and therefore had a higher potential for metastasis. The threshold percentage was determined to be 7% migratory cells. The device was 96% accurate in predicting metastatic potential among different breast cancer cell specimens, compared with a commercially available test assay, which was 72% accurate among the same cell lines.

When the researchers added in an additional element — measuring a protein called Ki-67 that is found in the nucleus of actively proliferating cells — it increased the device’s ability to predict migration/metastatic potential to 100% of their specimens.

To further examine which factors contribute to the increased metastatic potential of migratory cells, investigators compared the characteristics of these cells to nonmigratory cells, finding they were more elongated and moved with higher velocity and persistence. Studying RNA from each type of cell, investigators found that, compared with the heterogeneous unsorted population, migratory cells had gene expression changes in multiple signaling pathways related to cell survival and migration.

Next, they compared the metastatic potential of four additional human breast cancer cell lines as predicted by MAqCI to the actual behavior of these tumor cells implanted in living mice and verified MAqCI’s accurate predictions.

In additional experiments, investigators studied two well-characterized tumor specimens (HCI-001 and HCI-002) from patients with metastatic triple-negative breast cancer. These cells — which are missing the three most common receptors that promote cancer growth — were able to migrate through the channels in the MAqCI device, and also were found to have levels of Ki-67 cells consistent with metastatic disease, indicating that the device found both specimens to be metastatic.

Finally, the investigators tested MAqCI’s ability to predict the effectiveness of potential therapies that inhibit cell motility. They looked at the drugs trametinib, FDA-approved for melanomas, and BKM120, a PI3K inhibitor undergoing study in clinical trials for breast cancer. The team found that trametinib was effective in reducing the percentage of migratory cells in three triple-negative breast cancer cell lines with high metastatic potential. However, the other drug, BKM120, reduced the percentage of migratory cells in just two of these three cell lines, and actually increased the migratory capability of cells in the third cell line, which investigators found was due to the different gene mutations in each of the cell lines — a common confounding factor in cancer treatment.

“This finding illustrates the varied responses of tumor cells to different drugs, and why we need ways to further subclassify tumors beyond classic molecular activity like triple negative, HER2, etc.,” Konstantopoulos said.

If additional studies affirm the capabilities of the MAqCI test, it could be used to monitor the migratory and proliferative tendencies of cells isolated from a biopsy or removed breast cancer or other solid tumor, the team said.