A number of institutional failures caused the water crisis in Flint, Michigan, and bad data certainly didn’t help. In September 2016, a paper by Michigan State public health researcher Richard Sadler showed how the state misrepresented the severity of the crisis by grouping patients’ blood samples, obtained from pediatric clinics, by ZIP code. There are seven different ZIP codes for Flint’s residents, but only two of those contain strictly city residents. The other five include large swaths of surrounding county residents who don’t receive the city’s contaminated water, yielding an inaccurate “average” level of contamination for those areas.

“What would be possible if we actually brought to bear evidence-based programs, evidence-based practices, good research and evaluation, so we can really say with certainty what things are making the biggest difference and for whom?” wonders public health researcher Debra Furr-Holden. “Who’s being overlooked? Where are the unmet needs?” 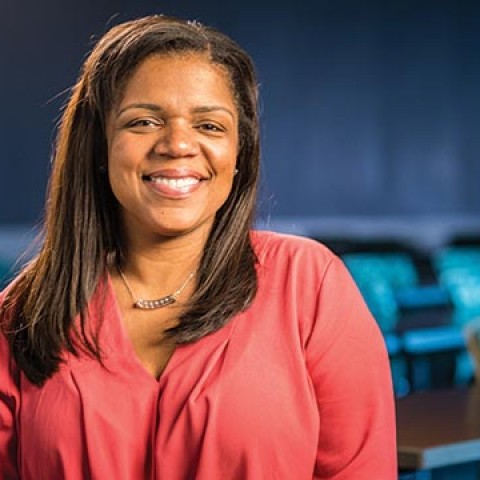 Those questions inspired Furr-Holden, A&S ’96, SPH ’99 (PhD), to leave her post as associate professor of mental health at Johns Hopkins in early 2016 for Flint, a city that has halved in population since she lived there as a teenager, around the time when filmmaker Michael Moore’s Roger & Me spotlighted the socio­economic decline brought on by General Motors’ downsizing. As professor of public health at Michigan State University’s new College of Human Medicine Division of Public Health, one of her duties is leading the college’s new Flint Center for Health Equity Solutions, funded by the National Institute on Minority Health and Health Disparities. She’s been forming partnerships with grassroots community groups, faith-based organizations, the city health department, local and state elected officials, and economic development groups so the center can get a handle on what Flint needs and what resources it might already have.

A project like this “has to be very community-involved because there’s a whole lot of earned government mistrust” in Flint, Furr-Holden says. Remember, this is the city where the government changed the city’s water supply to save costs and two years passed before researchers declared it unsafe. Residents “have a valid mistrust of not just government but also health officials and academics because they don’t think that we sounded the alarm fast enough, either.”

AS GM STARTED TO LEAVE THE CITY, PEOPLE DID TOO—EXCEPT THE ONES WHO COULDN’T AFFORD TO FLEE. THEY’VE BEEN GETTING BY AS BEST THEY CAN.

The center will look at the issues Flint’s residents have seen firsthand, and that’s not limited to unpotable water. During a December interview, Furr-Holden mentioned there’s only one major grocery store within Flint’s city limits. The U.S. Department of Agriculture defines a food desert as a community where at least 500 people or at least 33 percent of the population lives more than 1 mile from a supermarket or large grocery store. “There are parts of Baltimore that fit the criteria,” she says. “The whole city of Flint fits those criteria.”

Contaminated water and a citywide food desert are but two of Flint’s public health crises brought on by failing infrastructures. Many small to midsize American cities face similar challenges, thanks to the austerity measures local governments embraced in the 1970s that created pockets of people living in poverty and with poor physical and mental health over the next few decades. “Small to midsize cities were kind of the bedrock of America,” she says. In fact, more people live in a small to midsize city like Flint than in our country’s largest cities. There are 34 U.S. cities with populations over 500,000, from New York down to Fresno, California, according to U.S. Census estimates for 2015. In total they contain an estimated 42,600,237 people, or 13.3 percent of the population. By contrast, there are 269 cities with populations between 100,000 and 500,000; they contain an estimated 49,397,577 people, or 15.4 percent of the population.

Flint’s population peaked at just over 200,000 people in the 1960s, when General Motors employed nearly half the city’s workforce (roughly 85,000 people). GM began downscaling in the ’70s, and today the company employs roughly 5,500 people in Flint. “GM was the stake in the ground for economic development and viability for the city,” Furr-Holden says, adding that as GM started to leave the city, people did too—except the ones who couldn’t afford to flee. They’ve been getting by as best they can. “I call them the Flint riders,” Furr-Holden says, citizens “who are just fully committed to Flint. It’s got a very vibrant cohort of community-based organizations that have been taking care of the residents for decades.”

Those grassroots networks are going to be important in helping the center implement its future interventions.

But first, researchers need an accurate understanding of the problem. That means more data gathering and analysis and more study of the social, political, and economic structures and policies that shape Flint. Simply under­standing the problem’s complexity, much less addressing it, sounds daunting, but Furr-Holden believes the interventions piloted in Flint can eventually help other struggling midsize cities. “Flint is small enough that you can literally put your hand around it, but it’s also big enough that it matters,” Furr-Holden says. “I think the work that we’re doing here is not just about Flint; it gives us an opportunity to develop and test and validate models that work.”