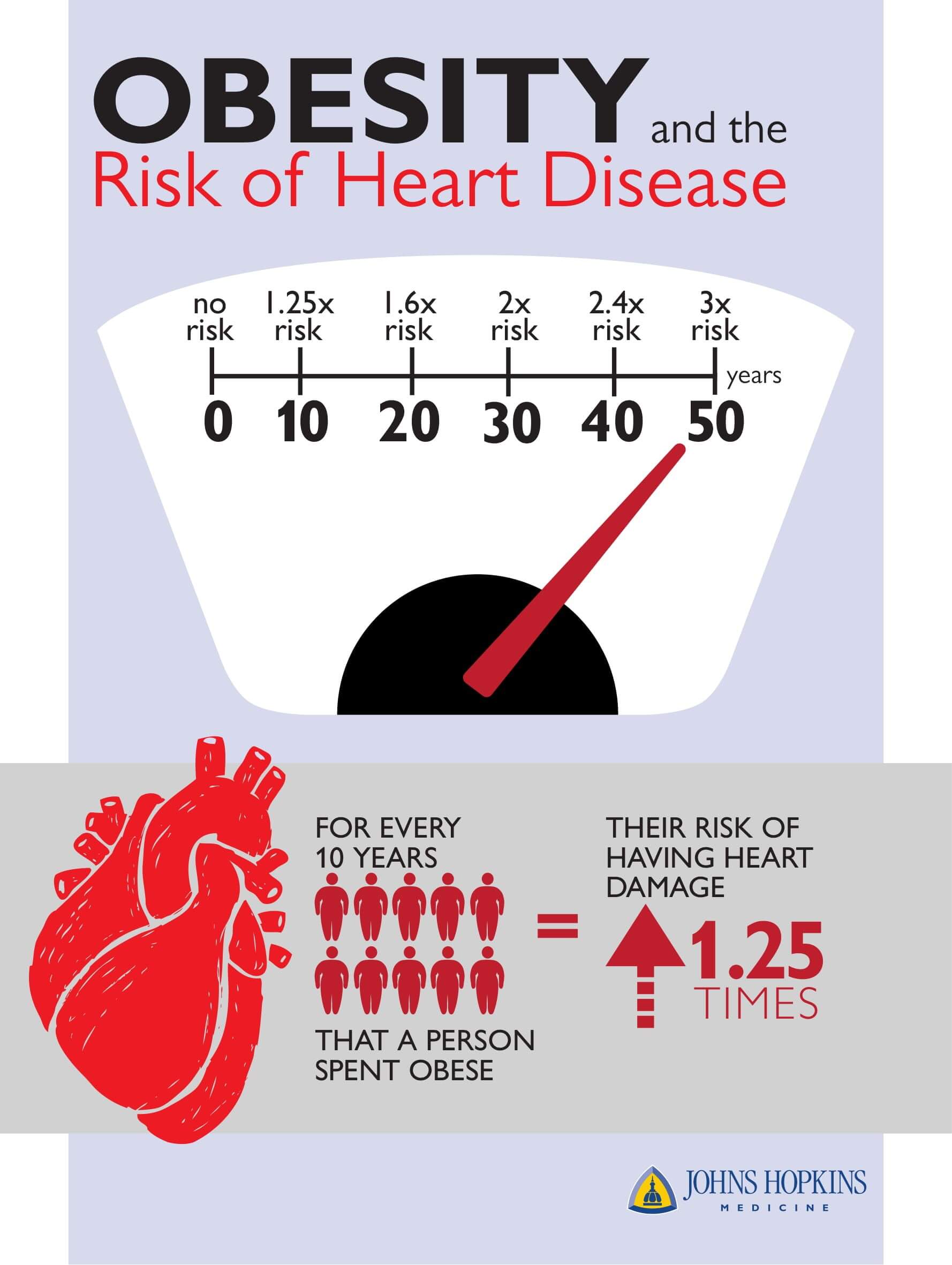 In an analysis of clinical data collected on more than 9,000 people, Johns Hopkins researchers have shown that the number of years spent overweight or obese appear to “add up” to a distinct risk factor that makes those with a longer history of heaviness more likely to test positive for a chemical marker of so-called “silent” heart damage than those with a shorter history.

The researchers say the findings suggest that maintaining a healthy weight across the lifespan is important for keeping the heart healthy and minimizing damage as people age.

The authors caution that their study wasn’t designed to find or measure a direct cause and effect relationship between being overweight long-term and a higher risk of heart disease, but rather to shed light on possible relationships between the two.

“We’re finding that people’s weight from age 25 onwards is linked to the risk of more or less heart damage, as measured by levels of the protein troponin, later in life, which underscores the likely importance of long-term weight control for reducing heart disease risk,” says Chiadi Ndumele, M.D., M.H.S., the Robert E. Meyerhoff Assistant Professor of Medicine at the Johns Hopkins University School of Medicine and a member of the Johns Hopkins Ciccarone Center for the Prevention of Heart Disease. “What our findings suggest is that even in the absence of such heart disease risk factors as high blood pressure, diabetes or kidney disease, the number of years spent obese or overweight contributes to the higher likelihood of heart damage.”

In 2014, Ndumele and colleagues showed that excessive weight is linked to silent heart damage as detected by elevated troponin levels of 14 nanograms per liter or higher—a clinical indicator of heart damage identified with a blood protein test. But that study didn’t evaluate the role of being overweight over an extended period of time.

For the new study, summarized in the January issue of the journal Clinical Chemistry, the research team used data gathered on 9,062 participants in the federally funded Atherosclerosis Risk in Communities (ARIC) study in Washington County, Maryland, Forsyth County, North Carolina, Jackson, Mississippi, and Minneapolis. Of the participants, 58F percent were women and 21 percent were African-American.

Participants were recruited from 1987 through 1989 and were seen four times through 1998 to assess body mass index (BMI), history of heart disease and levels of high sensitivity troponin in the blood. Participants also self-reported their weight at age 25, which provided information on weight from young adulthood through late middle age and elderly years. The average age at the fourth visit was 63.

Nearly 23 percent of participants had an increase in BMI from the first visit to the fourth visit. A BMI of more than 25 kilograms per meter squared indicates a person is overweight, and a BMI of more than 30 indicates obesity. At the fourth visit, 3,748 participants were overweight and 3,184 were obese. Some 5 percent showed a decreased BMI and 72 percent remained the same.

On a scale of zero to 50 years, the researchers then tabulated the number of years each person spent being obese, defined as a BMI over 30. For each 10 years that a person spent obese, their risk of having elevated troponin increased 1.25 times, even when accounting for heart disease risk due to high blood pressure, diabetes and kidney disease.

To develop a measurement of cumulative weight, the researchers calculated excess BMI-years for each participant. Using data from age 25 and each  visit, they calculated the average BMI and multiplied the average excess BMI above 25 kilograms per meter squared by the number of years of follow-up (from age 25 to their age at visit four). Those with a BMI less than 25 kilograms per meter squared at different time points could receive negative values for excess BMI years.

BMI-years for the participants ranged from -274 to 1,205. On average, each 100 extra BMI-years increased the likelihood, or risk, of increased troponin by 21 percent.

“It’s challenging to effectively communicate future risk to young people who seem perfectly healthy and at the prime of their lives,” says Ndumele. “A measurement like excess BMI-years could be developed and tested as a way of communicating risk to young and middle age people to reduce their long-term risk of cardiovascular disease by maintaining a healthy weight.”

Ndumele says there is some evidence that losing weight even after decades of obesity or being overweight may help reduce troponin levels and that the heart has the ability to heal somewhat, but the extent to which it can heal and the number of years spent obese that may cause permanent damage are unknown and require more study.

According to the Centers for Disease Control and Prevention, more than a third of adults in the U.S. are obese.

COI: Ballantyne has consulted for Roche. Nambi received an honorarium from Siemens and holds a provisional patent for biomarkers to predict heart failure risk.