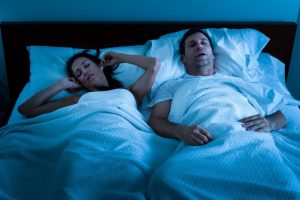 Experimenting with mice, Johns Hopkins Medicine researchers have added to evidence that a hormone best known for helping regulate hunger and body weight might also ease breathing problems experienced during sleep more effectively when given through the nose.

Although clinical trials using the hormone, known as leptin, aren’t yet on the horizon, the investigators say their success delivering it through the test animals’ noses may help them develop easier-to-use therapies for people with sleep-related breathing problems such as sleep apnea.

The findings were published online Oct. 12 in the American Journal of Respiratory and Critical Care Medicine.

Leptin, a hormone made by fat cells that was first identified in 1994, targets the brain’s appetite center, helping to regulate appetite. “Although leptin’s potential for treating obesity and curbing overeating failed to materialize in human trials, its role in the respiratory system has triggered new rounds of therapeutic possibilities,” says Vsevolod Polotsky, M.D., Ph.D., professor of pulmonary and critical care medicine at the Johns Hopkins University School of Medicine, and senior author of the study. His laboratory has been studying the hormone for more than 20 years.

A particular focus of his research is the search for new strategies to treat obstructive sleep apnea, a serious and even potentially lethal condition that affects approximately 30 percent of U.S. adults, Polotsky says. The prevalence increases to 50 percent among obese populations. The disorder is marked by frequent brief periods when breathing stops during sleep due to upper airways closing. The result is oxygen deprivation. People with obesity are also at higher than usual risk of another sleep breathing problem called obesity hypoventilation syndrome, in which brain centers that regulate breathing during sleep operate abnormally and fail to increase breathing appropriately in response to carbon dioxide, which results in the buildup of carbon dioxide in the blood. The syndrome often accompanies sleep apnea.

Currently, the most common effective treatment for these sleep problems is regularly wearing a continuous positive airway pressure (CPAP) mask and machine, which mechanically increases air pressure in the throat to keep airways open during sleep. But because CPAP machines must be worn at all times during sleep and some patients find them cumbersome, uncomfortable, noisy and confining, substantial numbers of people cannot tolerate them and stop their use.

Polotsky says previous research has shown that leptin is essential in regulating breathing, and can successfully treat sleep-disordered breathing symptoms in obese mice lacking leptin. However, mice with diet-induced obesity are resistant to the leptin hormone and failed to respond when leptin was injected into the belly (or abdomen).

“One major reason for leptin-resistance is that it is hard for injected hormone to get through the blood-brain barrier and into the target brain cells,” says Slava Berger, a postdoctoral fellow in Polotsky’s lab and the first author of the paper. “We suspected that administering leptin through the nose might circumvent that barrier and overcome leptin-resistance in our test animals.”

To test that idea, the researchers first made adult male mice obese by feeding them a high-fat diet for 16 weeks. Since leptin can cause weight loss in the long term—which also reduces breathing problems—the researchers first assessed the immediate effect of a single dose of leptin (0.4 milligrams per kilogram of body weight) on sleep breathing before the weight-loss effect could take place. In both mice receiving leptin and those not receiving it—either squirted in the nose or injected in the belly—the researchers compared how much air mice inhaled, measured by changes in temperature, and the number of times mice experienced inadequate oxygen during sleep. They looked at blood oxygen levels by putting neck collars on mice, which were similar to the clips used on human fingers in urgent care settings to measure blood oxygen levels. The results indicated that only mice given leptin through the nose showed increased ventilation by over 40 percent during sleep, which alleviated upper airway obstruction and cut the number of times the mice had insufficient oxygen levels by more than half.

The researchers stained neurons from the brains of mice given leptin through the nose and found that the leptin receptor on the surface of the neurons had detected leptin, meaning this method of delivery bypassed the blood-brain barrier and transported leptin directly to the brain, thus avoiding leptin-resistance.

To further look at the longer-term metabolic effects of leptin treatment, researchers treated a subset of their obese mice with leptin through the nose or the abdomen for two weeks. Again, only mice treated with leptin through the nose showed reduction in food intake and weight loss. Those mice lost 1 gram, almost 3 percent of total body weight, while the mice given leptin in the abdomen gained more than 3 grams, indicating leptin resistance.

“We believe our study provides the first evidence of its kind that giving leptin through the nose eases sleep disordered breathing,” says Polotsky. “In the future, we plan studies to look at the effects of different doses of leptin administered through the nose in mice.”

“Identifying key molecules that regulate breathing and how these molecules could be used to treat medical conditions such as sleep apnea is a significant achievement,” said Michael Twery, Ph.D., director of the National Center on Sleep Disorders Research at the National Heart, Lung, and Blood Institute, part of the National Institutes of Health.  “The discovery sets the stage on which new treatment options can be developed.”

The researchers caution that, as was the case with leptin’s use to treat obesity, mouse studies may not be applicable to humans. “We believe that leptin treatment should be tested in humans at some point, but we first need to look into the potential side effects, allergic reactions and other factors before that can happen,” says Polotsky.

Costs, too, are a consideration for future therapies. According to the American Sleep Association, an average CPAP costs $500–$3,000. The current clinical use of leptin in the form of metreleptin—an extremely expensive synthetic replacement for leptin—treats rare cases of leptin deficiency at hundreds of thousands of dollars per year. However, Polotsky and Berger estimate that if nasal leptin is found safe and effective for clinical use, costs could be similar to inhaled forms of the hormone insulin, which runs about $25 per vial.