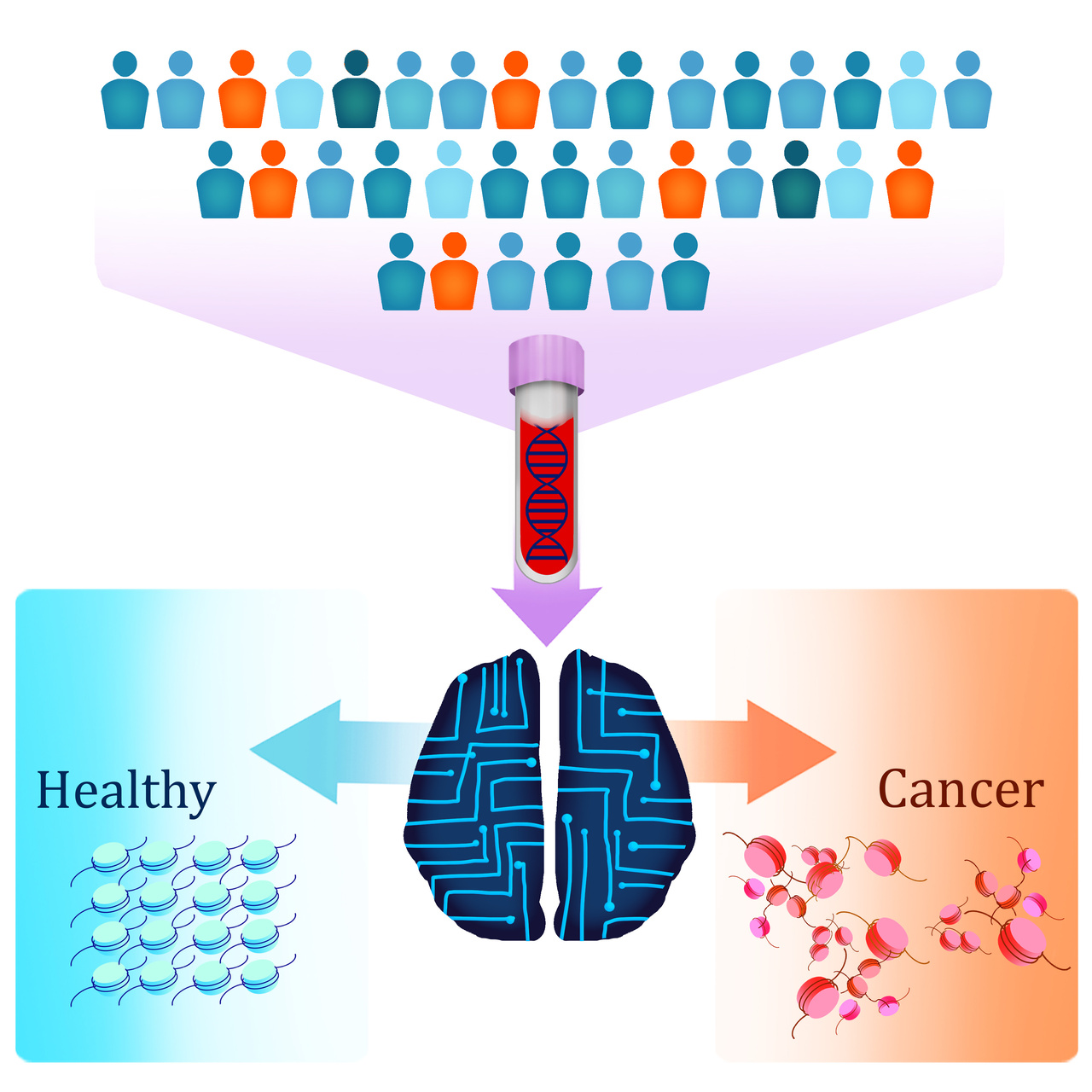 Researchers at the Johns Hopkins Kimmel Cancer Center have developed a simple new blood test that can detect the presence of seven different types of cancer by spotting unique patterns in the fragmentation of DNA shed from cancer cells and circulating in the bloodstream.

In a proof-of-concept study, the test, called DELFI (DNA evaluation of fragments for early interception), accurately detected the presence of cancer DNA in 57% to more than 99% of blood samples from 208 patients with various stages of breast, colorectal, lung, ovarian, pancreatic, gastric or bile duct cancers in the U.S., Denmark and the Netherlands.

DELFI also performed well in tests of blood samples from 215 healthy individuals, falsely identifying cancer in just four cases. The test uses machine learning, a type of artificial intelligence, to identify abnormal patterns of DNA fragments in the blood of patients with cancer. By studying these patterns, the investigators said they could identify the cancers’ tissue of origin in up to 75% of cases.

A report on the research will be published online May 29 in Nature.

Blood tests, or so-called “liquid biopsies” for cancer detection typically look for mutations, which are changes in the DNA sequence within a cancer cell, or for methylation, a chemical reaction in which a methyl group is added to DNA, says senior study author Victor E. Velculescu, M.D., Ph.D., professor of oncology and co-director of the Cancer Biology Program at the Johns Hopkins Kimmel Cancer Center. But not all cancer patients have changes that are detectable using these methods, he says, and there is a great need for improved methods for early detection of cancer.

DELFI, he says, takes a different approach, studying the way DNA is packaged inside the nucleus of a cell by looking in the blood at the size and amount of DNA from different regions across the genome for clues to that packaging.

Alessandro Leal, M.D., a lead author of the study and a Ph.D. candidate at the Johns Hopkins University School of Medicine, explains that the nuclei of healthy cells package DNA like a well-organized suitcase in which different regions of the genome are carefully placed in various compartments. By contrast, the nuclei of cancer cells are more like disorganized suitcases, with items from across the genome thrown in haphazardly.

“For various reasons, a cancer genome is disorganized in the way it’s packaged, which means that when cancer cells die they release their DNA in a chaotic manner into the bloodstream,” says Jillian Phallen, Ph.D., a lead author on the study and a Johns Hopkins Kimmel Cancer Center postdoctoral fellow. “By examining this cell-free DNA (cfDNA), DELFI helps identify the presence of cancer by detecting abnormalities in the size and amount of DNA in different regions of the genome based on how it is packaged.”

The researchers caution that the test’s potential must be further validated in additional studies, but if that happens it could be used to screen for cancer by taking a tube of blood from an individual, extracting the cfDNA, studying its genetic sequences and determining the fragmentation profile of the cfDNA. The genome-wide fragmentation pattern from an individual can then be compared with reference populations to determine if the pattern is likely healthy or derived from cancer.

Robert B. Scharpf, Ph.D., a senior author on the study and an associate professor of oncology, says that because the genome-wide fragmentation patterns may reveal differences associated with specific tissues, these patterns, when found to be derived from cancer, can also indicate the source of the cancer, such as from the breast, colon or lung.

Using DELFI, investigators found that genome-wide cfDNA fragmentation profiles are different between cancer patients and healthy individuals. Stephen Cristiano, a lead author on the study and a Ph.D. candidate in the Johns Hopkins Bloomberg School of Public Health, says that in cancer patients, fragmentation patterns in cfDNA appear to result from mixtures of DNA released from both blood and tumor cells, and show multiple distinct genomic differences with increases and decreases in fragment sizes at different regions.

All cancer patient samples were obtained before any treatment, and the majority of the samples (183) were from people whose disease could be treated with surgical removal of the tumors.

DELFI detected cancer in 73% of cancer patients overall, while misclassifying four of 215 healthy individuals (98% specificity). The test also was found to be 61%–75% accurate in identifying the tissue of origin of the cfDNA. When DELFI and mutation-based cfDNA analyses were combined, investigators could accurately detect 91% of cancer patients. Velculescu, Leal, Phallen, Scharpf, Cristiano and colleagues are in the process of scaling up their analyses to study DELFI’s performance in thousands of samples. “We’re encouraged about the potential of DELFI because it looks at a completely independent set of cell-free DNA characteristics from those that have posed difficulties over the years, and we look forward to working with our collaborators worldwide to make this test available to patients,” Velculescu says.

Because the test is easy to administer and employs simple and inexpensive laboratory methods, Velculescu expects that the test could ultimately be more cost-effective than other cancer screening tests, including other current cfDNA tests.

The work was supported by the Dr. Miriam and Sheldon G. Adelson Medical Research Foundation, the Stand Up to Cancer-Dutch Cancer Society International Translational Cancer Research Dream Team Grant (SU2C-AACR-DT1415), the Commonwealth Foundation, the Cigarette Restitution Fund, the Burroughs Wellcome Fund and the Maryland Genetics, Epidemiology and Medicine Training Program, the AACR-Janssen Cancer Interception Research Fellowship, the Mark Foundation for Cancer Research, the National Institutes of Health (grants CA121113, CA006973, and CA180950), the Danish Council for Independent Research (11-105240); the Danish Council for Strategic Research (1309-00006B), the Novo Nordisk Foundation (NNF14OC0012747 and NNF17OC0025052) and the Danish Cancer Society (R133-A8520-00-S41 and R146-A9466-16-S2).

Cristiano, Leal, Phallen, Fiksel, Adleff, Scharpf and Velculescu are inventors on patent applications (62/673,516 and 62/795,900) submitted by The Johns Hopkins University related to cell-free DNA for cancer detection. Velculescu also is a founder of Delfi Diagnostics and Personal Genome Diagnostics, a member of their scientific advisory boards and boards of directors, and owns Delfi Diagnostics and Personal Genome Diagnostics stock, which are subject to certain restrictions under university policy. Velculescu has been an adviser to Daiichi Sankyo, Janssen Diagnostics, Ignyta and Takeda Pharmaceuticals. The terms of these arrangements are managed by The Johns Hopkins University in accordance with its conflict of interest policies.