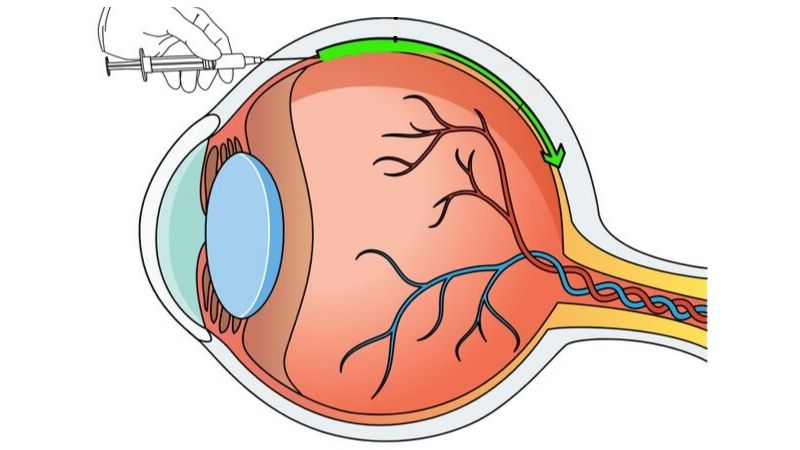 In experiments with rats, pigs and monkeys, Johns Hopkins Medicine researchers have developed a way to deliver sight-saving gene therapy to the retina. If proved safe and effective in humans, the technique could provide a new, more permanent therapeutic option for patients with common diseases such as wet age-related macular degeneration (AMD), and it could potentially replace defective genes in patients with inherited retinal disease.

The new approach, described in the Aug. 13 issue of The Journal of Clinical Investigation, uses a small needle to inject harmless, genetically engineered viruses into the space between the white of the eye and the eye’s vascular layer, called the suprachoroidal space. From there, the virus can spread throughout the eye to deliver therapeutic genes to cells in the retina.

The gene therapy approach currently used to treat Leber congenital amaurosis, an inherited eye disorder, involves a surgical procedure to inject the gene-carrying virus under the retina. This procedure carries a high risk of patients developing cataracts, and a low but significant risk of retinal detachment and other vision-threatening complications.

Though only tested in animals up to this point, the new suprachoroidal injection technique is less invasive because it does not involve detaching the retina, and theoretically, it could be done on an outpatient basis, marking a major step toward making permanent vision-saving gene therapies safer and more accessible.

“The best time for patients with inherited retinal degeneration to receive gene therapy treatments is when they still have fairly good vision. However, at that time, they also have more to lose from complications. The ability to offer a safer, more convenient procedure would be a breakthrough,” says Peter Campochiaro, M.D., Eccles Professor of Ophthalmology and Neuroscience at the Johns Hopkins University School of Medicine and the Wilmer Eye Institute.

A subretinal injection gene therapy approach is also being tested in clinical trials for age-related macular degeneration, which is among the leading causes of irreversible and disabling vision loss in people over age 50, according to the National Eye Institute. An estimated 10 million Americans have age-related macular degeneration. In the disease’s more common “wet” form, abnormal blood vessels grow under the retina and leak vision-blocking fluids into the eye. The growth and leakage of the abnormal blood vessels is caused by excess production of a cell signal called vascular endothelial growth factor (VEGF).

Currently, eye specialists can stave off vision loss by injecting a protein into the eye that blocks VEGF, but these treatments have a limited life span, so patients must return to the clinic every four to six weeks for more injections to maintain their vision. Missed appointments can allow the abnormal blood vessels to grow, causing further vision loss.

“We find that repeated treatments, although effective, can be hard for patients to keep up with, and over time, they lose vision,” says Campochiaro.

However, a gene therapy could turn each cell in the retina into a little pharmaceutical factory that constantly produces anti-VEGF proteins, thereby continuously maintaining vision without repeated injections.

To test if the suprachoroidal injection technique could effectively deliver gene therapies to the retina, the researchers first wanted to track whether the technique would allow the virus to reach the back of the eye. The researchers injected eyes of 10 rats with a harmless form of adeno-associated virus modified to carry a fluorescent marker into the suprachoroidal space of the eye. They used high-powered microscopes to track the glow across the retina and found that after a week, the virus had reached the entire retina.

Next, the researchers looked at whether this virus could deliver helpful genes. They loaded an anti-VEGF gene into their modified virus and injected it into the suprachoroidal space of 40 rats induced to develop a humanlike form of macular degeneration. For comparison, they used the conventional subretinal injection in 40 other rats.

The researchers found that the suprachoroidal injection technique performed just as well as the conventional subretinal approach, and was as effective and long lasting in delivering the vision-protecting anti-VEGF protein. By also performing these experiments in pigs and rhesus monkeys, the researchers confirmed that the suprachoroidal delivery method worked in larger animals’ eyes that are closer in size to human eyes. All yielded similar results.

While this gene therapy is promising, Campochiaro notes it may not be an option for people previously exposed to viruses similar to the one they used in these experiments, because their immune system might stop the virus before it can deliver its cargo into the retina’s cells. However, he believes that suprachoroidal injections may, one day, prove to be a viable option for a large number of patients with wet AMD and patients with inherited disorders caused by defective genes.

“Our hope is that with suprachoroidal injections, patients can just walk into a clinic and get their vision-saving treatment without worrying about many of the complications that come with subretinal injections,” says Campochiaro.

The research was supported by REGENXBIO Inc., the Altsheler-Durell Foundation, Per Bang-Jensen, Mr. and Mrs. Conrad Aschenbach and Mr. and Mrs. Andrew Marriott.