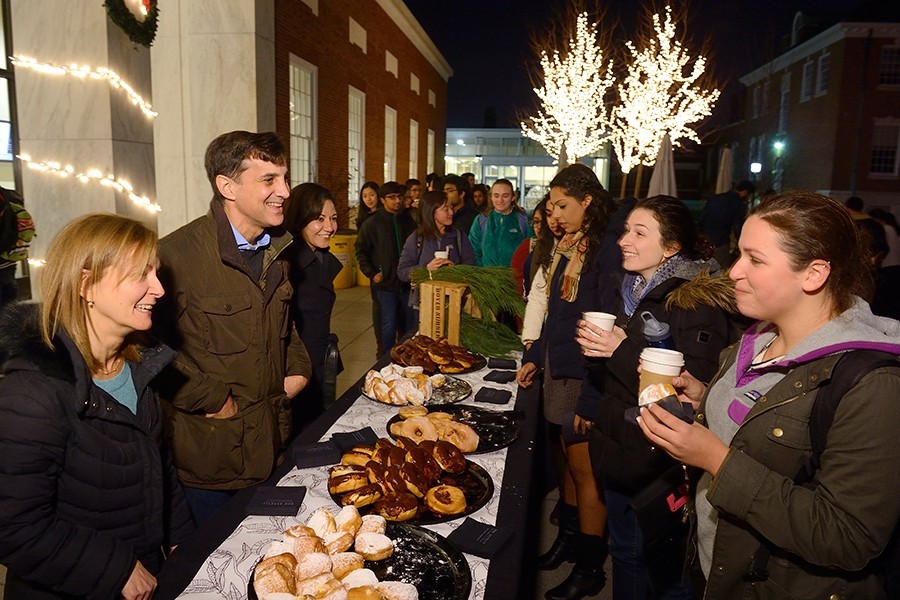 Johns Hopkins University President Ronald J. Daniels and his wife, faculty member Joanne Rosen, are establishing a $1 million financial aid endowment for undergraduates who are among the first in their families to attend college.

The Daniels-Rosen First Generation Scholars Fund will be created with $500,000 directly from the couple and another $500,000 presented to the university as part of a Carnegie Corporation of New York Academic Leadership Award that Daniels received in 2015.

“THE OPPORTUNITY TO HELP OTHERS ACHIEVE THEIR EDUCATIONAL, PERSONAL, AND PROFESSIONAL ASPIRATIONS THROUGH A JOHNS HOPKINS EDUCATION IS DEEPLY MEANINGFUL FOR JOANNE AND ME.”

The fund, together with a Johns Hopkins match applied to all new endowed gifts for undergraduate aid, is expected each year to meet the financial need of four undergraduate students in the university’s Krieger School of Arts and Sciences and Whiting School of Engineering.

“A top priority for this university and for our president is ensuring that we are able to bring the best students to Johns Hopkins, no matter their economic circumstances,” said Jeffrey H. Aronson, chair of the university’s board of trustees. “I am deeply grateful to Ron and Joanne for their personal commitment to students who come here without the advantage of generations of college access. I look forward to seeing these students thrive at Johns Hopkins and beyond.”

Daniels has made support for students—financially, academically, and in extracurricular pursuits—a focus of his presidency.

“My own father and his siblings were the first generation of his family able to pursue a university education,” Daniels said. “Access to a transformative education made a profound difference in his life and in his children’s lives. The opportunity to help others achieve their educational, personal, and professional aspirations through a Johns Hopkins education is deeply meaningful for Joanne and me.”

The president, who has led the university since 2009, has also emphasized its role as a key anchor institution in Baltimore, launching the Homewood Community Partners Initiative and the HopkinsLocal economic development program, restructuring the Baltimore Scholars program, helping to establish the Henderson-Hopkins School in East Baltimore, and supporting in numerous ways the growth of the revitalized Eager Park community north of the university’s medical campus. The Carnegie Corporation cited both Daniels’ initiatives for students and his community focus as among the reasons for his Academic Leadership Award.

Rosen, a human rights lawyer interested in laws that regulate reproductive health and sexual orientation, is an associate lecturer in the Department of Health Policy and Management at the university’s Bloomberg School of Public Health and director of the Clinic for Public Health Law and Policy.

“Ron and I share a deep personal and professional commitment to creating opportunities for educational advancement,” Rosen said. “We have seen firsthand, in our own families and in the experiences of our students, the ways that education can change the trajectory and meaning of people’s lives. We are thrilled to help offer future members of the Johns Hopkins family that same opportunity.”

The gifts establishing the Daniels-Rosen First Generation Scholars Fund are part of Rising to the Challenge: The Campaign for Johns Hopkins, an effort to raise $5 billion, primarily directed toward students, faculty members, research and discovery, and interdisciplinary solutions to some of humanity’s most important problems. The campaign, supporting both the university and Johns Hopkins Medicine, began in January 2010, was publicly launched in May 2013, and is targeted for completion in June 2018. To date, the campaign has raised $4.6 billion. Of that, nearly $500 million has been for undergraduate scholarships and graduate fellowships.