The celebration began for staff members with a breakfast reception and a technology expo, showcasing nearly 20 of the laboratory’s latest innovations. During the reception, attendees were also treated to a slideshow depicting APL people, places, and developments across the decades. 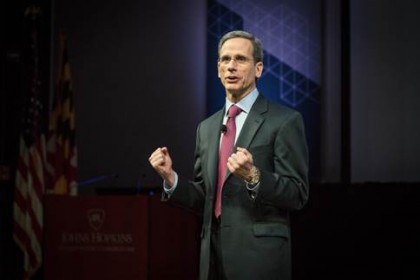 Ralph Semmel, APL’s director, concluded the lab’s 75th anniversary celebration by urging those in attendance to “be bold, do great things, make the world a better place.”

Speaking to a capacity crowd of more than 1,200 people at the Kossiakoff Center and many more watching online, Johns Hopkins University President Ronald J. Daniels was effusive in his praise of the laboratory, its leadership, and its staff members.

“For 75 years—in war and peace—APL’s engineers and scientists have answered the nation’s call, as they have tackled a complex array of scientific and technical challenges,” Daniels said. “By any measure, APL has proven its ability not only to provide solutions to the problems of the day, but to help our nation’s leaders anticipate the challenges on the horizon.” 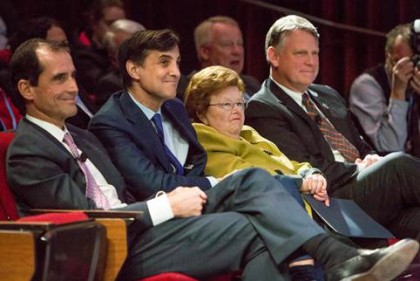 During the main part of the program, APL Director Ralph Semmelhighlighted the lab’s nine defining innovations, calling them “game-changing breakthroughs in technology that created inflection points in history.” These revolutionary advances, he said, ignited new engineering accomplishments globally, saved lives, and secured the United States against threats at home and abroad.

Near the end of the program, Semmel unveiled a 75th anniversary timeline video (included above) that was set to music composed and performed by students from Johns Hopkins University’s Peabody Institute.

In concluding the celebration, Semmel used a phrase that is becoming synonymous with his tenure as APL director: “Be bold. Do great things. Make the world a better place.”