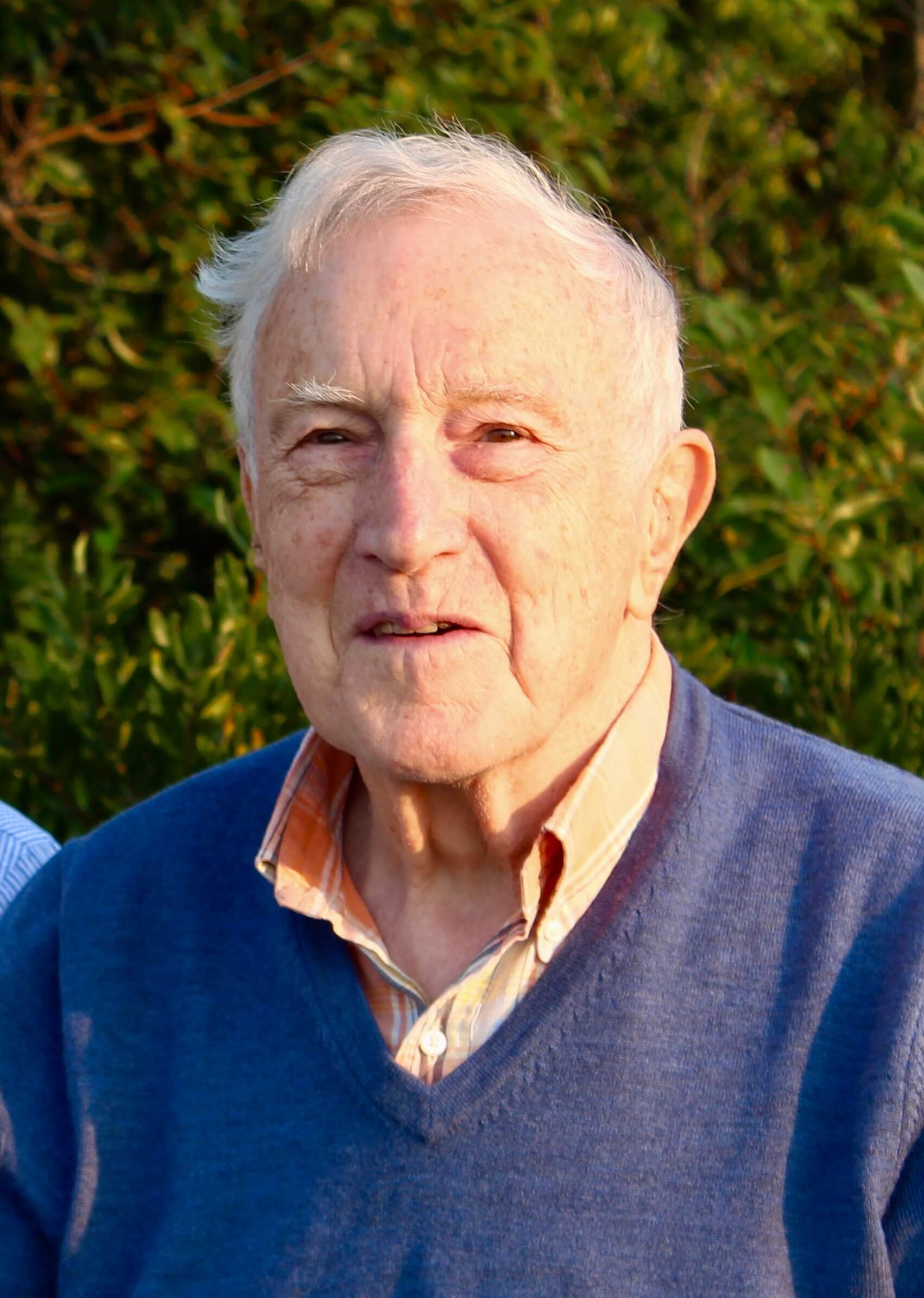 John Walley Littlefield, M.D., a renowned physician-scientist whose work dramatically advanced the field of genetics and touched countless human lives, died peacefully on Thursday, April 20, surrounded by his family and loved ones. He was 91.

A former director of pediatrics and physiology at the Johns Hopkins University School of Medicine and pediatrician-in-chief at The Johns Hopkins Hospital, Littlefield was also a prolific researcher who focused on the use of human cells in culture as a valuable tool in scientific experimentation, including studies on how our cells age. He played a leading part in discovering the role of the ribosome in protein synthesis. He developed the technique of using amniocentesis to diagnose prenatal genetic disorders. He had a major role in developing a procedure to map human genes. And he helped pioneer the derivation and study of human stem cells. His publications, assembled in the John W. Littlefield Collection of the Alan Mason Chesney Medical Archives of The Johns Hopkins Medical Institutions, measure over 38 feet in width. He was a member of the National Academy of Sciences.

“John’s research in somatic cell genetics was the foundation for the discovery and production of monoclonal antibodies, a class of biologic drugs that has revolutionized the treatment of a variety of autoimmune and inflammatory diseases,” says Jerry Winkelstein, M.D., professor emeritus of pediatrics at the Johns Hopkins University School of Medicine. “I always wondered why he wasn’t given a share of the Nobel Prize for this work.”

Born in Providence, Rhode Island, on December 3, 1925, John Littlefield was the youngest of five children of Mary and Ivory Littlefield, president of the Title Guarantee Company of Rhode Island. In his youth, Littlefield spent summers with a large and wonderful clan of cousins at Russell Corner in Princeton, Massachusetts. He attended the Moses Brown School in Providence but left after his junior year to enroll at Harvard College and then Harvard Medical School. He completed his studies at both institutions in five years, graduating from medical school in 1947 at the age of 21.

In 1950, Littlefield married the extraordinary Elizabeth Lascelles Legge — known to her friends and family as Bette — of Charleston, South Carolina. Bringing together the best of the South and the North, they were happily married for 45 years, living mainly in Weston, Massachusetts, and in Owings Mills, Maryland. They also spent three separate years abroad to work and teach at Oxford and Cambridge Universities in England and in a genetics lab in Naples, Italy. Bette died in 1995.

In 1952, Littlefield left his young wife and their newborn son, Peter, to serve in the Korean War as a naval doctor on the U.S.S. Repose, a hospital ship stationed off the Korean coast. While in Korea he met a young Marine officer aboard the Repose. That Marine’s daughter would, some 25 years later, marry Littlefield’s second son, John, leading to an unexpected and happy reunion of the two men.

After the Korean War, Littlefield — then a lieutenant — was assigned to the U.S. Navy Reserve, only to be called up for a second tour of duty weeks later, this time near the Arctic Circle. In 1954, Littlefield moved back to Boston to join the faculty at Harvard Medical School and the staff at Massachusetts General Hospital.

In 1957 and 1958, Littlefield moved to Cambridge, England, with Bette and their two sons to serve as a research assistant with James Watson and Frances Crick, who several years later would win the Nobel Prize in Medicine for their elucidation of the molecular structure of DNA. His collaboration with these luminaries helped to lay the foundation for Littlefield’s later career in human genetics. Shortly after his time in England ended, Littlefield would co-author a paper with Watson in the Journal of Molecular Biology, describing their investigations into the role of the Shope papilloma virus in tumor formation in rabbits.

Returning to Harvard and Massachusetts General in 1958, Littlefield delved deeper into genetic research. In one of the proudest accomplishments of his professional life, he developed a method to isolate hybrid cells, a technique that would be used by other researchers to localize genes to specific chromosomes for gene mapping.

In 1965 and 1966, Littlefield spent a year at the Institute of Genetics and Biophysics in Naples, Italy, with his family, which now included a daughter, Elizabeth. Accompanied by his family, Dr. Littlefield also lectured in several countries across Europe, including parts that were then behind the Iron Curtain.

Returning with his family to their home in Weston in 1966, Littlefield founded — and was appointed chief of — a new genetics unit at the Children’s Service at Massachusetts General. He soon gained renown as a nationwide champion for this new, important discipline. Genetics became a recognized medical specialty in 1982, and Littlefield was elected president of the American Society of Human Genetics in 1983.

In 1974, Littlefield, board certified in internal medicine, moved to Baltimore to assume the position of professor and director of pediatrics at the Johns Hopkins University School of Medicine and pediatrician-in-chief of the Children’s Hospital of Johns Hopkins Hospital. At the time, this large facility had over 250 beds, 60 professors, and over 200,000 patients a year. He continued his work on cultured cells while heading up the hospital.

“While leading the department of pediatrics, Littlefield recognized that it lacked key leadership in several emerging and established sub specialties. During his tenure, he recruited new physician-scientists as leaders in neonatology, pulmonary, gastroenterology, nephrology, academic general pediatrics and oncology. He also was instrumental in recruiting several junior faculty members who later became leaders at Johns Hopkins and many other programs in pediatrics across the country,” says George Dover, M.D., another former director of the department of pediatrics at the Johns Hopkins University School of Medicine and former pediatrician-in-chief of the Johns Hopkins Children’s Center. “By the end of his tenure, the department was academically much stronger and leading in academic accomplishments in clinical, teaching and research.”

Colleagues described Littlefield as a quietly commanding person. “He spoke softly, was always polite and calm, but his self-confidence came through. He was quite unafraid to admit that there were things he did not know, and very confident about the things he did know,” says Lawrence Wissow, M.D., professor of child and adolescent psychiatry, and director of the Center for Mental Health in Pediatric Primary Care at the Johns Hopkins University School of Medicine.

In 1985, Littlefield was appointed chairman of the school’s department of physiology, allowing him to spend more time in research. In 1992, he earned a master’s degree in health science from the then-named Johns Hopkins School of Hygiene and Public Health.

Perhaps the greatest legacy of Littlefield’s work is the wide use of amniocentesis — the isolation of fetal cells from the womb — to diagnose genetic disorders in fetuses. His innovation enabled pregnant women to be tested for a broad range of genetic disorders in their developing fetuses. For the first time in history, families with known propensities for genetic disorders, who normally might have avoided having children, could now safely screen for disorders and make better informed choices about family planning. Littlefield argued for the lawful availability of abortion in cases where a disorder is diagnosed and is judged by the parents to be severe enough to warrant terminating the pregnancy. For several decades after his development of this use of the procedure, nearly half of all women in the U.S. over the age of 35 chose to have amniocentesis.

Following his official retirement in 1992, Littlefield became an integral member of a research team at Johns Hopkins that would become the first to report on the derivation of human stem cells capable of forming all cell types in the body. His expertise with cell culture was key to establishing these unique cells in culture, and to initiating further studies that have revolutionized biomedical research. John Gearhart, the team leader, credits Littlefield’s experience, knowledge, research talents and drive — as well as his insistence on rigorous experimental design and meticulous execution — as essential in this groundbreaking work, which was published in 1998.

During this time, Littlefield also taught courses on ethics in genetics, pulling together the many issues with which he had grappled throughout his career, and about which he held clear and principled views.

Littlefield was the author of nearly 200 scientific publications as well as two books: Variation, Senescence and Neoplasia in Cultured Somatic Cells and (with two co-authors) The Harriet Lane Home: A Model and a Gem, a history of the Harriet Lane Clinic at Johns Hopkins.

Throughout his life, Littlefield was passionate about ethical issues and the health of women and girls, especially in developing countries, as well as about global issues such as nuclear disarmament and climate change. He was an ardent advocate for universal health care through a single payer health care system. He loved tennis, classical music and jazz, Gary Larson’s cartoons, and the Baltimore Orioles. He and Bette also loved canoeing and hiking, especially in the Adirondack Mountains of upstate New York, where they built a rustic cabin for family getaways. He delighted those around him with his charming and sly sense of humor, his understated practical jokes, and a devilish twinkle in his eye.

Littlefield is survived by his three children: Peter Porcher Littlefield of Greenville, South Carolina, John Walley Littlefield Jr. of Cummaquid, Massachusetts, and Elizabeth Lascelles Littlefield of Washington, D.C., as well as his children’s loving spouses, his grandchildren, his many devoted nieces and nephews, and his wonderful friend Nancy Warner of Baltimore.

A memorial service is planned for 2 p.m. on May 19 at St Thomas’ Church in Owings Mills, Maryland. In lieu of flowers, Dr. Littlefield’s family asks that you consider a donation in his memory to Doctors Without Borders, a nonprofit organization close to his heart and to his life’s work.