ICTR in the News: Reservoirs of Latent HIV Can Grow Despite Effective Therapy, Study Shows

Researchers have found that immune cells latently infected with HIV can proliferate, carrying the virus along with cellular DNA 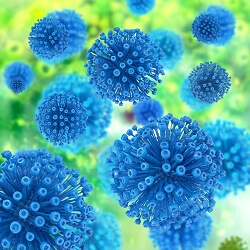 HIV genetic information is copied by immune cells in the latent reservoir and can be reactivated later, presenting a major barrier to curing HIV. Credit: iStock

Researchers at Johns Hopkins Medicine report new evidence that immune cells infected with a latent form of human immunodeficiency virus (HIV) are able to proliferate, replenishing the reservoir of virus that is resistant to antiretroviral drug therapy. Although HIV can be controlled with therapy in most cases, the proliferation of such reservoir cells pose a persistent barrier to developing a cure for HIV, researchers say.

“We knew before that the reservoir is very long lived,” says Robert Siliciano, M.D., Ph.D., professor of medicine at the Johns Hopkins University School of Medicine, “but what we didn’t know was how the reservoir was maintained. Now it is clear that these cells aren’t just sitting there but are dividing and replenishing themselves.”

A report on the new research, published March 24 in the Journal of Experimental Medicine, says resting CD4+ T cells not only make up the latent reservoir of HIV in those infected, but also have the potential to reactivate the production of active virus throughout the body.

In the study, Siliciano and his team collected latently infected HIV cells from the blood of 12 patients with HIV on long-term antiretroviral therapy.

After growing the CD4+ T cells in the laboratory, the investigators exposed them to four rounds of chemicals designed to stimulate cell division and proliferation.

After each round of stimulation, the cell population was split into two separate groups and allowed to grow, one serving as a control and the other used to repeat the process. Following each stimulation, the researchers also measured whether the cells were releasing HIV.

Previously, Siliciano explains, researchers suspected that such cells could not proliferate without releasing the active form of HIV. Although some cells did release HIV during the first stimulation, the subsequent stimulations of each cell line also released more virus, suggesting that some of the latently infected cells divided without releasing the infectious virus and maintained the ability to do so in subsequent stimulations.

The researchers then sequenced the genomes of the viruses. They speculated that if the viruses in subsequent stimulations from each patient were genetically identical, that would tell them the HIV they detected originated from cell division, rather than from independent infections because of HIV’s high genetic mutation rate.

“When you sequence HIV from a patient, you typically get a huge variety of HIV viruses that are genetically different. Looking at the viruses we grew out, there was much less diversity. In fact, the sequences were mostly identical throughout the series of stimulations. We think that strongly suggests that what we are seeing is a single cell proliferating and copying the HIV DNA along with it,” Siliciano says.

Siliciano’s team found that these kinds of viral copies were so common they could find multiple cells carrying the same variant of HIV in a single blood sample. “For this to be possible, the reservoir must be mostly composed of these cellular clones.”

In the future, Siliciano and his team say they will search for specific factors that cause these cells to proliferate and to develop new techniques that allow them to study whether the location of the HIV genome in the cell’s DNA affects this process.

More than 1.2 million people in the U.S. are living with HIV and one in eight of them are unaware that they are infected, according to the Centers for Disease Control and Prevention. Stigma and discrimination around HIV is still a major challenge to reaching and treating infected people, so the CDC estimates that only half of infected people have their virus under control with consistent treatment. However, the number of new HIV cases has fallen significantly since the 1990s and with improved awareness and improved treatments, the life expectancy of people infected with HIV is close to that of the general population. “Treatments now are so good,” Siliciano says, “that if we are able to eliminate the reservoir, we could cure HIV.”