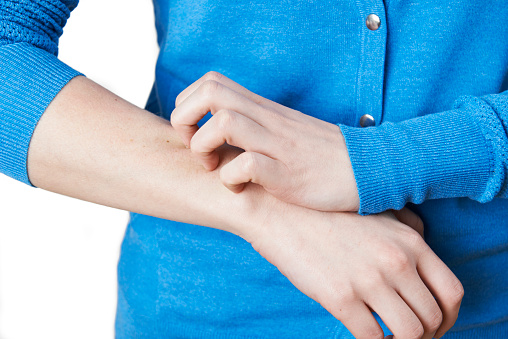 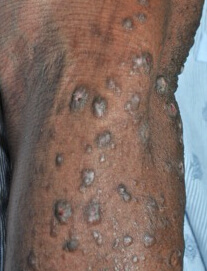 An international team led by Johns Hopkins Medicine researchers has conducted what is believed to be the largest detailed published study of people with a poorly understood skin condition known as prurigo nodularis (PN). Such studies collect information on a whole subset of people at once and at a particular point in time.

Results of their analysis were highlighted in an oral presentation at the International Investigative Dermatology Conference in May 2018 and were published on May 4 by the Journal of the American Academy of Dermatology. Their results provide some of the first published reliable information from a racially diverse population about who likely develops this chronic disease, which is characterized by intensely itchy nodules that develop on the arms and legs that can generalize throughout the body.The prevalence of PN remains unknown as the condition has been understudied compared with other inflammatory skin diseases, and its origins, causes and treatment are still largely unexplored. However, says study leader Shawn Kwatra, M.D., assistant professor of dermatology at the Johns Hopkins University School of Medicine, PN’s impact is significant.

“These are patients whose lives have been devastated by an unbearable, persistent itch that dramatically reduces quality of life on par with the most severe diseases treated by our specialty,” he says.Besides the immense discomfort from itching and scratching, Kwatra explains, PN interferes with sleep and affects social interactions with people who may be (needlessly) afraid of contracting this noninfectious disease. Despite its severe impact, he adds, PN has been largely ignored by scientists.

To learn more about it, he and his colleagues conducted a detailed study of data from 909 adults with PN over a five-year period. There were 475 females and 434 males. Of the participants, nearly half were African American, about 42% were white, and about 3% were Asian.In addition to demographic information, the investigators extracted details of the patient group’s comorbidities, or other medical problems these patients had at the same time as PN. The majority of patients, nearly half, were between 51 and 65 years old. The findings also suggest that the condition disproportionately affects African-Americans between ages 50 and 65 as compared with the general population.

The team suggests their information may be used not only in the clinical care of PN patients, but forms a basis for ongoing translational studies to develop novel treatments for the disorder, which has no FDA-approved therapy or consistently effective treatment.Kwatra cautions that such associations do not demonstrate that PN causes these disorders, or vice versa. More research will be necessary to tease out whether and why these various conditions are linked, he says, which could eventually lead to a better understanding of the mechanism of PN and better targeted treatments.However, he adds, knowing the connections between PN and various health conditions could lead physicians to give patients more thorough evaluations to check for other conditions once they’re diagnosed with PN.

Current systemic treatments for PN include phototherapy, neuroactive agents such as gabapentin and pregabalin, and systemic immunosuppressants such as methotrexate and cyclosporine. As PN is associated with dermatologic conditions such as atopic dermatitis in African-Americans, as well as many systemic conditions, further study is needed to determine the exact prevalence.

Kwatra is supported by a grant from the Skin of Color Society, investigating racial differences in itch.