ICTR in the News: pH Imbalance in Brain Cells May Contribute to Alzheimer’s Disease 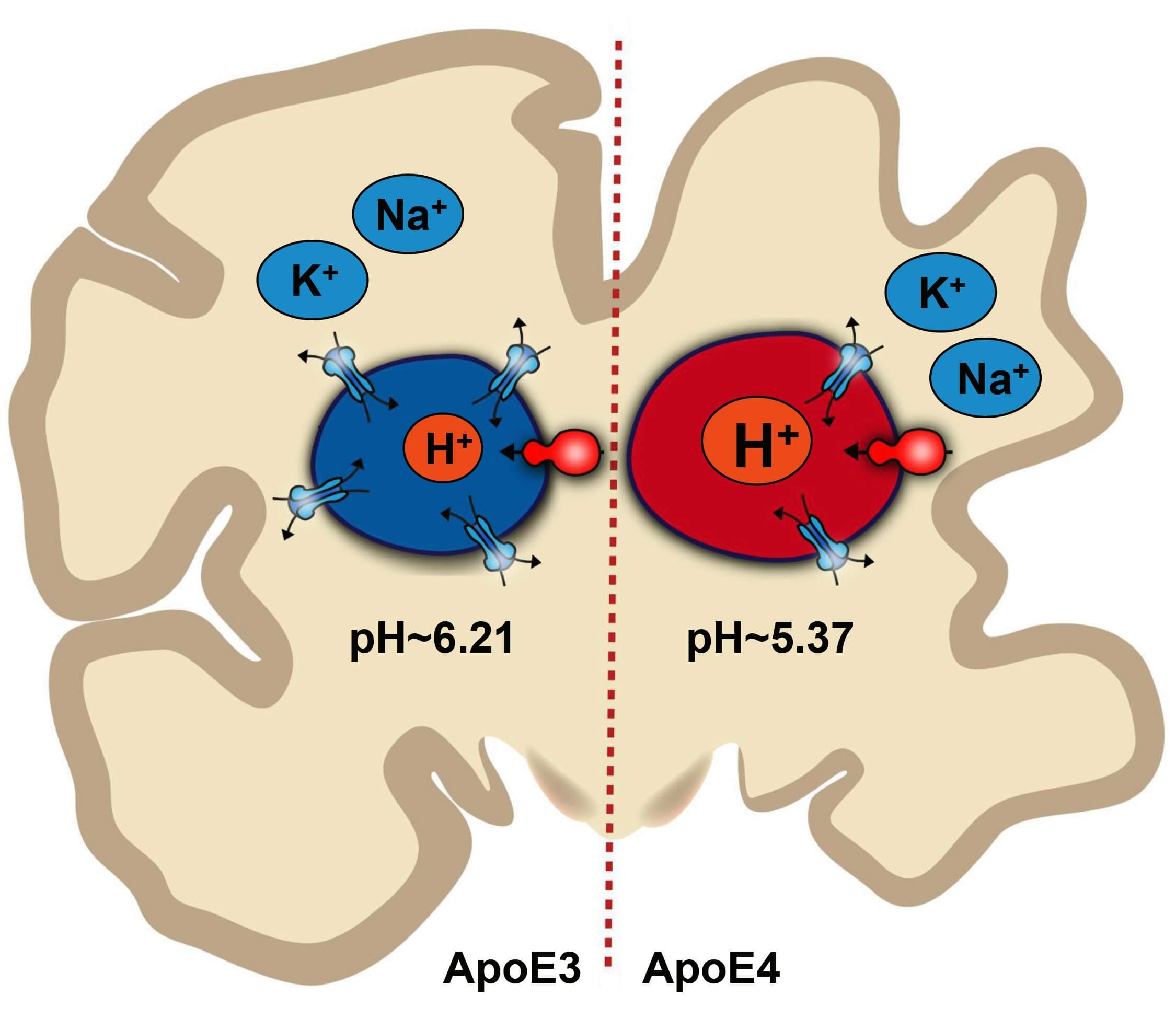 Illustration of how pH imbalance inside endosomes may contribute to Alzheimer’s disease. Credit: Hari Prasad

Johns Hopkins Medicine scientists say they have found new evidence in lab-grown mouse brain cells, called astrocytes, that one root of Alzheimer’s disease may be a simple imbalance in acid-alkaline—or pH—chemistry inside endosomes, the nutrient and chemical cargo shuttles in cells.

Astrocytes work to clear so-called amyloid beta proteins from the spaces between neurons, but decades of evidence has shown that if the clearing process goes awry, amyloid proteins pile up around neurons, leading to the characteristic amyloid plaques and nerve cell degeneration that are the hallmarks of memory-destroying Alzheimer’s disease.

However, the scientists caution that even before those experiments can happen, far more research is needed to verify and explain the precise relationship between amyloid proteins and Alzheimer’s disease, which affects an estimated 50 million people worldwide. To date, there is no cure and no drugs that can predictably or demonstrably prevent or reverse Alzheimer’s disease symptoms.

“By the time Alzheimer’s disease is diagnosed, most of the neurological damage is done, and it’s likely too late to reverse the disease’s progression,” says Rajini Rao, Ph.D., professor of physiology at the Johns Hopkins University School of Medicine. “That’s why we need to focus on the earliest pathological symptoms or markers of Alzheimer’s disease, and we know that the biology and chemistry of endosomes is an important factor long before cognitive decline sets in.”

Nearly 20 years ago, scientists at Johns Hopkins and New York University discovered that endosomes, circular compartments that ferry cargo within cells, are larger and far more abundant in brain cells of people destined to develop Alzheimer’s disease. This hinted at an underlying problem with endosomes that could lead to an accumulation of amyloid protein in spaces around neurons, says Rao.

To shuttle their cargo from place to place, endosomes use chaperones — proteins that bind to specific cargo and bring them back and forth from the cell’s surface. Whether and how well this binding occurs depends on the proper pH level inside the endosome, a delicate balance of acidity and alkalinity, or acid and base, that makes endosomes float to the surface and slip back down into the cell.

Embedded in the endosome membrane are proteins that shuttle charged hydrogen atoms, known as protons, in and out of endosomes. The amount of protons inside the endosome determines its pH.

To measure the pH balance within endosomes without breaking open the astrocyte, Prasad and Rao used pH sensitive probes that are absorbed by endosomes and emit light based on pH levels. They found that mouse cell lines containing the Alzheimer’s disease gene variant had more acidic endosomes (average of 5.37 pH) than cell lines without the gene variant (average of 6.21 pH).

While it’s likely that changes in NHE6 happen over time in people who develop sporadic Alzheimer’s disease, people who have inherited mutations in NHE6 develop what’s known as Christianson syndrome in infancy and have rapid brain degeneration.

Prasad and Rao also found that a protein called LRP1, which picks up amyloid beta proteins outside the astrocyte and delivers them to endosomes, was half as abundant on the surface of lab grown mouse astrocytes engineered with a human gene variant called APOE4, commonly linked to Alzheimer’s disease.

Looking for ways to restore the function of NHE6, Prasad searched databases of yeast studies to find that HDAC inhibitors tend to increase expression of the NHE6 gene in yeast. This gene is very similar across species, including flies, mice and humans.

Funding for the study was provided by the Johns Hopkins Medicine Discovery Fund, the National Institutes of Health (DK054214). Prasad is a Fulbright fellow in the Graduate Training Program in Cellular and Molecular Medicine supported by the International Fulbright Science and Technology Award.