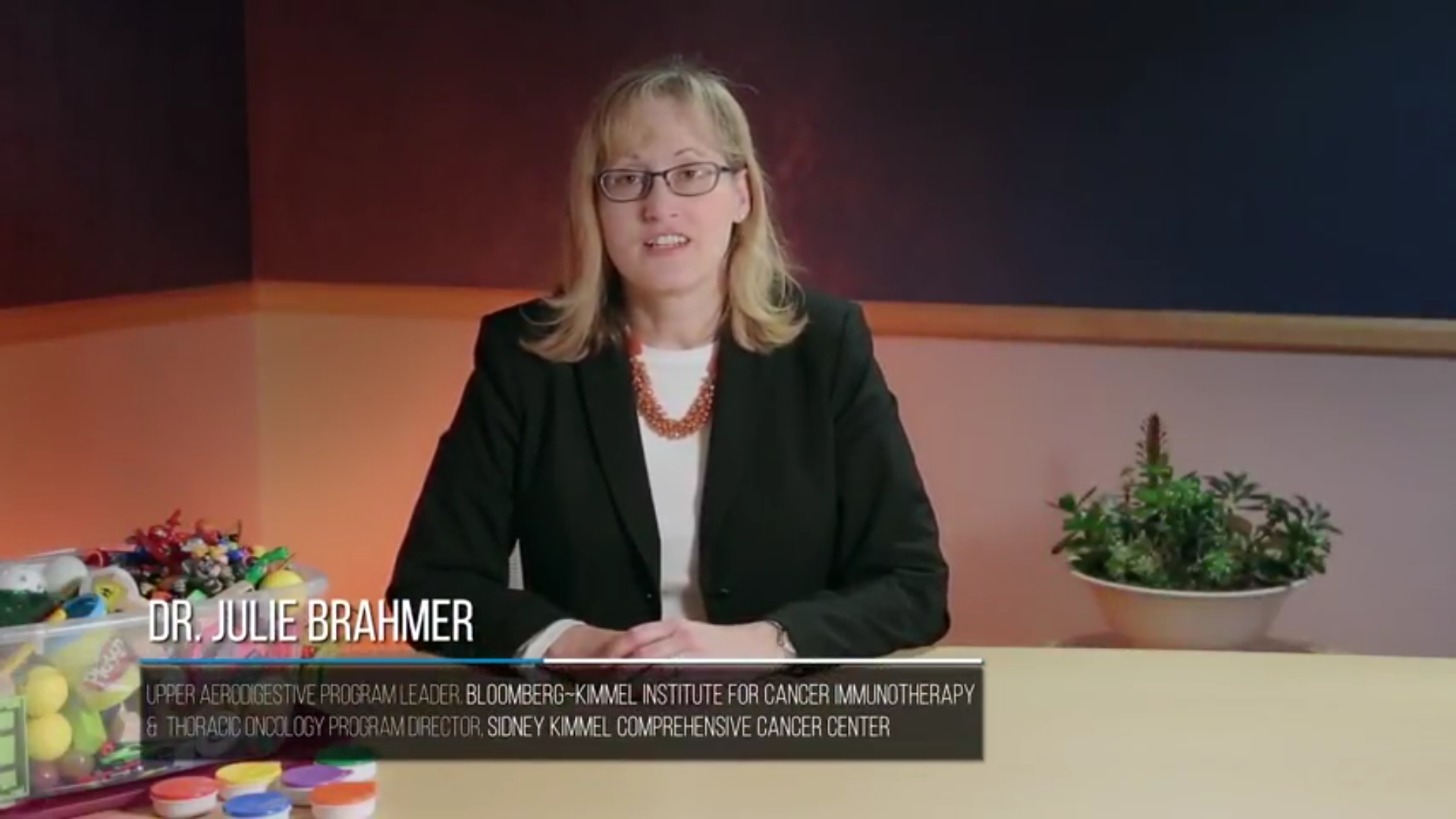 Julie Brahmer, M.D., discusses immunotherapy in a Science Out of the Box video. To see the video, click here. (Credit: Johns Hopkins Medicine)

More than seven years after the start of one of the first clinical trials of the immunotherapy drug nivolumab, researchers at the Johns Hopkins Kimmel Cancer Center report that the five-year survival estimate for a limited subset of people with advanced nonsmall cell lung cancer taking the drug is 16 percent, compared with a historical survival rate for that group of 1 to 4 percent.

A summary of the trial data, gleaned from follow-up information gathered on a total of 129 patients since it began in 2010, is scheduled for presentation April 3 at the American Association for Cancer Research Annual Meeting 2017 (abstract #CT077).

According to results of the data analysis of the 129 patients with advanced nonsmall cell lung cancer treated at more than 11 hospitals nationwide, including the Johns Hopkins Hospital, 16 survived at least 58 months (nearly five years). Twelve of the 16 received no further therapy and showed no evidence of worsening disease at the time the data were analyzed in November 2016. The other four received further chemotherapy or joined other clinical trials. Nine of the 16 are male.

“A small subset of nonsmall cell lung cancer patients appear to respond to nivolumab and have beaten the odds that most patients with this cancer face,” says Julie Brahmer, M.D., program leader at the Johns Hopkins Bloomberg-Kimmel Institute for Cancer Immunotherapy and director of the Johns Hopkins Kimmel Cancer Center on the Johns Hopkins Bayview Medical Center campus. “Now, we need to figure out how to make more patients responsive to immunotherapy by exploring combinations of immunotherapy drugs and other treatment agents.”

“It’s clear that the patients who beat the survival odds are in some ways truly unique biologically, and the goal now is to discover exactly how immunotherapy is keeping their disease in check,” says Brahmer.

Applying their analysis more broadly, Brahmer and her colleagues estimate that 16 percent of patients with nonsmall cell lung cancer who receive nivolumab will survive beyond five years.

Thus far, Brahmer and the team of physicians who conducted the trial have not been able to identify specific genes or proteins shared by the 16 patients that could be linked to long-term survival.

Typically, says Brahmer, only 1 to 4 percent of patients with advanced nonsmall cell lung cancer survive five years, a form of lung cancer that strikes an estimated 222,500 Americans each year and accounts for 85 percent of all lung cancers in the United States.

Apart from nivolumab, which was approved by the U.S. Food and Drug Administration for lung cancer therapy in 2015 based on research led by Brahmer, standard treatments include various types of chemotherapy.

Brahmer and her colleagues published some of the first data among this group of 129 patients in the Journal of Clinical Oncology in 2015. At the time, side effects reported among the group taking nivolumab included fatigue, thyroid problems, lung inflammation (pneumonitis), rashes and gastrointestinal problems. Three patients died from pneumonitis.

Patients in the study received nivolumab once every two weeks for up to two years. Brahmer says that defining which patients need continued therapy and which don’t would not only get the best treatments to each patient more quickly, but also present an opportunity for cost savings for patients who won’t benefit from the expensive drug, which can cost more than $100,000 per year.

Brahmer cautions that the study’s value is limited by the fact that patients who received nivolumab were not directly compared with patients who did not receive the drug.

Funding for the study was provided by Bristol-Myers Squibb, the maker of the drug.