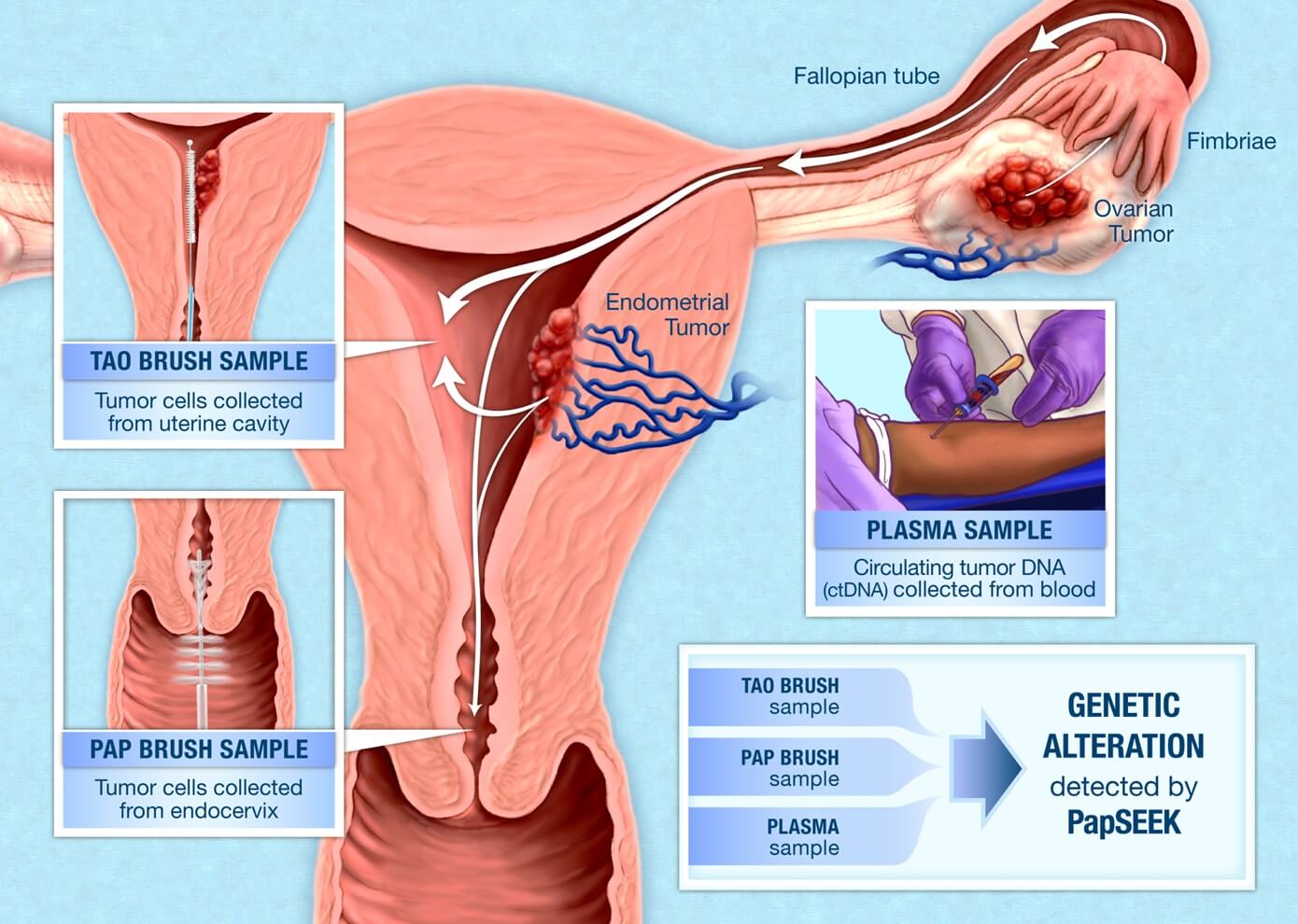 Since fluid from the Pap test occasionally contains cells from the endometrium or ovaries, researchers found they could detect cancer cells from these organs that are present in the fluid by using different brushes. Credit: Johns Hopkins University

Cervical fluid samples gathered during routine Papanicolaou (Pap) tests are the basis of a new screening test for endometrial and ovarian cancers developed by researchers at the Johns Hopkins Kimmel Cancer Center.

PapSEEK detects mutations in DNA that have been identified for specific cancers sooner. Earlier detection of cancer could lead to earlier treatment and potentially better outcomes for patients.

The test uses cervical fluid samples to look for mutations in 18 genes, which are highly or commonly mutated in endometrial or ovarian cancers, and aneuploidy, the presence of abnormal numbers of chromosomes in cells. The researchers said their results showed the potential for mutation-based diagnostics to detect endometrial and ovarian cancers earlier.

Their findings were published in the March 21 issue of Science Translational Medicine.

“More than 86,000 U.S. cases of endometrial and ovarian cancer were diagnosed in 2017. Treatment often involves surgery and, in some cases, chemotherapy or radiation,” said Amanda Nickles Fader, M.D., director of the Johns Hopkins Kelly Gynecological Oncology Service, Department of Gynecology and Obstetrics, and a corresponding author on this study.

“Additionally for young women who are diagnosed, loss of fertility is common. If we could detect the cancer earlier using a test like PapSEEK, the potential to achieve more cures and preserve fertility in select women could be realized.”

Most cancers are curable if they are detected early, and the researchers are exploring ways to use cancer gene discoveries to develop cancer screening tests to improve cancer survival. They announced the development of CancerSEEK, a single blood test that screens for eight cancer types, and UroSEEK, a test that uses urine to detect for bladder and upper tract urothelial cancer.

PapSEEK targets the most common and most lethal gynecological cancers, endometrial and ovarian cancer. There is currently no screening test for endometrial cancer and, due to the obesity epidemic, it is on the rise, particularly in younger women.

“Gynecological cancers are responsible for approximately 25,000 deaths per year and are the third leading cause of cancer-related mortality,” said Nickolas Papadopoulos, Ph.D., a senior author and an investigator at the Ludwig Center at Johns Hopkins. “Most of the deaths are caused by tumors that metastasize prior to the onset of symptoms. With PapSEEK, we are aiming to detect these cancers early when they are most curable.”

Since fluid from the Pap test occasionally contains cells from the endometrium or ovaries, researchers found they could detect cancer cells from these organs that are present in the fluid.

Obtaining cervical fluid samples using a Tao brush, which extends further into the cervical canal and collects cells closer to where the cancers could originate, improved the sensitivity of the test. Testing plasma samples with Pap brush samples also increased the test’s sensitivity.

The Tao brush is not commonly used in the United States but is approved by the U.S. Food and Drug Administration for endometrial sampling. When the plasma and Pap brush samples were both tested, the sensitivity of the test for ovarian cancer increased to 63 percent.

COI: Under agreements between The Johns Hopkins University, Genzyme, Sysmex-Inostics, Qiagen, Invitrogen and Personal Genome Diagnostics, Vogelstein, Kinzler, Papadopoulos and Diaz are entitled to a share of the royalties received by the university on sales of products related to genes and technologies described in this manuscript. Vogelstein, Kinzler, Papadopoulos and Diaz are co-founders of Personal Genome Diagnostics and PapGene Inc.; are members of the Scientific Advisory Boards of Sysmex-Inostics, Personal Genome Diagnostics and PapGene Inc.; and own Personal Genome Diagnostics and PapGene Inc. stock, which is subject to certain restrictions under Johns Hopkins University policy. Kinde is a co-founder and chief scientific officer of PapGene, Inc. The company has licensed previously described technologies related to the work described in this paper. The terms of these arrangements are managed by The Johns Hopkins University in accordance with its conflict of interest policies. Part of the technology described in U.S. Patent 20150292027 (Papanicolaou Test for Ovarian and Endometrial Cancers) was applied in this study.