ICTR in the News: More Evidence of Link Between Severe Gum Disease and Cancer Risk

The following article profiles work performed by ICTR researcher Elizabeth Platz, Sc.D., deputy chair of the department of epidemiology at the Johns Hopkins Bloomberg School of Public Health and co-leader of the Cancer Prevention and Control Program at the Johns Hopkins Kimmel Cancer Center. 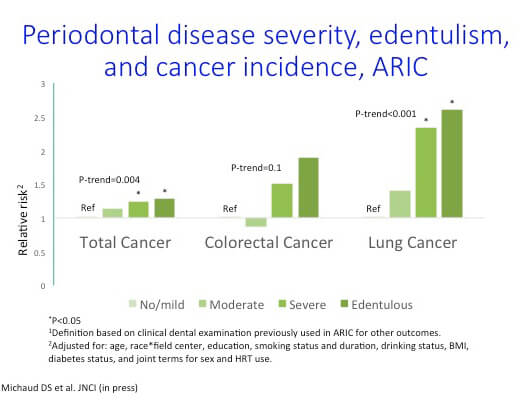 Data collected during a long-term health study provides additional evidence for a link between increased risk of cancer in individuals with advanced gum disease, according to a new collaborative study led by researchers at the Johns Hopkins Bloomberg School of Public Health, Johns Hopkins Kimmel Cancer Center and Tufts University School of Medicine and Cancer Center.

Advanced gum disease, also called periodontitis, is caused by bacterial infection that damages the soft tissue and bone that support the teeth. Previous research has shown a link between periodontitis and increased cancer risk, although the exact mechanism connecting the two diseases is still uncertain.

In the new study, published in the Journal of the National Cancer Institute, the research team used data from comprehensive dental exams performed on 7,466 participants as part of their participation in the Atherosclerosis Risk in Communities (ARIC) study, then followed the participants from the late 1990s until 2012. They found a 24 percent increase in the relative risk of developing cancer among participants with severe periodontitis, compared to those with mild to no periodontitis. The highest risk was observed in cases of lung cancer, followed by colorectal cancer.

Among patients who had no teeth—which can be a sign of severe periodontitis or past periodontal treatment—the increase in risk was 28 percent, the researchers noted.

The association is not strong enough to recommend screening for risk of particular cancers based on a periodontal disease diagnosis, said Elizabeth Platz, Sc.D., deputy chair of the department of epidemiology at the Johns Hopkins Bloomberg School of Public Health and co-leader of the Cancer Prevention and Control Program at the Johns Hopkins Kimmel Cancer Center. “But we see a modest to moderate risk increase in cancer that seems to be holding up across studies, so perhaps dentists should say to their patients that there are risks related to periodontal disease, and this is one of them.”

The ARIC data were especially useful to study because, unlike previous research linking gum disease and cancer risk, periodontitis cases were determined from dental examinations performed as part of the ARIC study rather than participants’ self-reports of the disease, said Platz. The dental exams provided detailed measurements of the depth of the pocket between the gum and tooth in several locations in the mouth. (In general, deeper measurements indicate more advanced periodontitis.)

Platz noted that the research team was also able to account for the impact of smoking among the patients, since people who smoke are more likely to get periodontal disease, and smoking raises the risk of lung and colon cancers. “When we looked at the people who had never smoked in this group, we still saw evidence that having more periodontal disease was related to an increased risk of lung cancer and colorectal cancer.”

Patients with little or no access to health care, including dental exams and cancer screenings such as colonoscopy, and prevention programs, such as smoking cessation, also have an increased risk of both periodontal disease and cancer, Platz noted. “However, after taking into account socio-economic factors and access to and uptake of care, these factors did not appear to explain these associations between periodontitis and cancer risk,” she said.

The researchers found no links between increased risk of breast, prostate, blood or lymphatic cancer and periodontitis, which may offer some clues about the mechanism by which cancer and gum disease are linked. “It may be that the bacteria that cause periodontal disease go from the mouth directly into the lungs, or from the mouth into the colon,” says Platz. “If they were to cause an inflammatory response, that could increase the risk of carcinogenesis.”

The researchers also uncovered a small but not statistically significant increase in the risk of pancreatic cancer in patients with severe periodontitis, an association that has been seen in other similar studies, including one led by the study’s first author, Dominique Michaud of Tufts University School of Medicine. “The pancreas is not open to the mouth, but there are other ways that bacteria can end up in an organ. For instance, if bacteria could get into the bloodstream from bleeding gums, it might circulate and deposit in an organ, causing an inflammatory reaction,” says Platz.

The link between periodontitis and increased cancer risk was weaker or not apparent in African-American patients from the ARIC study, except in cases of lung and colorectal cancer. “We don’t know why, and that’s an area that deserves more attention,” Platz says.

The research involved collaborations between cancer researchers at Johns Hopkins and Tufts and dental researchers at the University of North Carolina School of Dentistry. The team plans to work together to explore other data related to the process of periodontal disease and the bacterium that cause the disease to better understand how they may directly relate to cancer risk.

In addition to Michaud and Platz, other participants include Jiayun Lu, John Barber and Corinne Joshu from Johns Hopkins; Alexandra Peacock-Villada from Tufts University; Anna Prizment from the University of Minnesota; and James Beck and Steven Offenbacher of the University of North Carolina, Chapel Hill.