ICTR in the News: Lethal Prostate Cancer Treatment May Benefit from Combination Immunotherapy 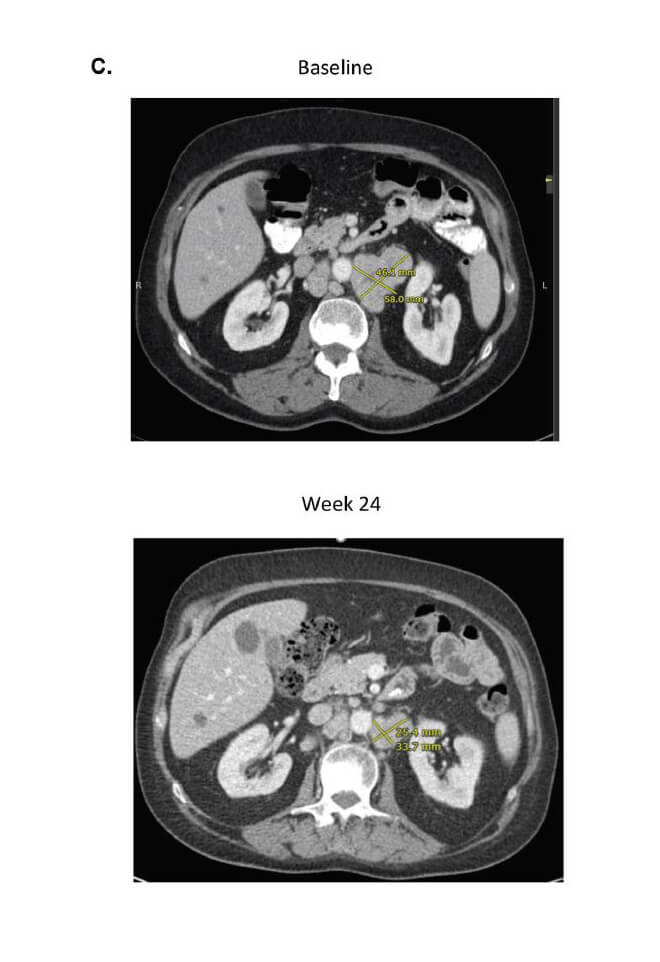 CT scan of radiographic response for a patient at baseline and after 24 weeks of treatment. The sum diameter of his target lesions decreased by 52 percent at the time of his best response. Credit: Johns Hopkins Kimmel Cancer Center

Researchers at the Johns Hopkins Kimmel Cancer Center and the Bloomberg~Kimmel Institute for Cancer Immunotherapy (BKI) released a study investigating the use of combination checkpoint immunotherapy in the treatment of a lethal form of advanced prostate cancer. The study suggested a genetic subset of prostate cancer may benefit from this form of immunotherapy.

The study targeted AR-V7+ prostate cancer with a combination of two checkpoint blockers, ipilimumab and nivolumab, in 15 patients with this aggressive variant, first discovered at Johns Hopkins in 2014.

This is the first clinical trial to target this specific form of prostate cancer, which can kill patients in only six to nine months and has inadequate treatment options. It is the first reported study of combination immunotherapy using both ipilimumab and nivolumab in prostate cancer.

“This is the first prostate cancer study to be supported by the Bloomberg~Kimmel Institute for Cancer Immunotherapy since the institute was launched and provides the first evidence that immunotherapy can indeed benefit some patients with prostate cancer, a cancer type previously thought to be completely immunotherapy resistant,” said Drew Pardoll, M.D., Ph.D., director of the BKI.

The data showed two out of the 15 men (13 percent) experienced a decrease in the level of prostate-specific antigen (PSA) of at least 50 percent. More encouragingly, one-quarter of patients achieved an objective response, meaning that their tumors shrank partially or completely with combination immunotherapy. These responses were typically lasted at least nine months. At least two of the patients remain alive for more than 18 months, which is much longer than expected for men with AR-V7+ prostate cancer.

Six of 15 patients (40 percent) had a genetic subtype of prostate cancer that harbored somatic and/or germline mutations in one DNA-repair genes involved in the BRCA pathway, first shown to predispose women to breast and ovarian cancer. In these six men, gene mutations of BRCA2, ATM, and ERCC4 were individually detected in those patients.

“Remarkably, all of the benefit from ipilimumab plus nivolumab appeared to occur in patients who had one of these gene mutations, particularly in two men with BRCA2 mutations,” said Emmanuel Antonarakis, M.B.B.Ch., senior author of the study.

“This finding is important, because BRCA2 is not a gene that was previously thought to sensitize patients to immune checkpoint inhibitors and, if true, will have profound implications for other diseases, such as breast and ovarian cancers where these genes are frequently mutated,” said Antonarakis. “In the setting of prostate cancer, about 20-25 percent of patients have mutations in BRCA2 and related genes, which are involved in a DNA-repair process called homologous recombination. This study suggests that these gene mutations may be even more common in men with the AR-V7+ type of prostate cancer.”

While prostate cancer is generally regarded as a low–mutation-burden tumor and immune-checkpoint blockade has resulted in only rare clinical regressions when used as a monotherapy, the data suggested AR-V7+ prostate cancers may be associated with a greater number of DNA-repair gene mutations and a higher mutation load and could be further exploited by using combination immunotherapy.

“If these findings are confirmed, this could offer some hope to these patients with AR-V7+ disease who have few, if any, good treatment options,” said Antonarakis.

The study showed the combination of nivolumab plus ipilimumab demonstrated acceptable safety and tolerability in men with AR-V7+ advanced prostate cancer. Based on the encouraging preliminary findings, Antonarakis said he will expand his study to involve a greater number of patients. The expanded study is open to enrollment and actively seeking new patients.

The Bloomberg~Kimmel Institute for Cancer Immunotherapy was founded in 2016 with a series of philanthropic investments totaling $125 million from benefactors Michael R. Bloomberg, Sidney Kimmel and more than a dozen other supporters. It is a groundbreaking collaboration between clinical and scientific specialties, supporting cancer immunotherapy research across many cancer types.

COI: Emmanuel Antonarakis is a paid consultant/advisor to Janssen, Astellas, Sanofi, Dendreon, Medivation, ESSA, AstraZeneca, Clovis and Merck; has received research funding to his institution from Janssen, Johnson & Johnson, Sanofi, Dendreon, Genentech, Novartis, Tokai, Bristol Myers-Squibb, AstraZeneca, Clovis and Merck; and is the co-inventor of a biomarker technology that has been licensed to Qiagen. Victor Velculescu is a founder of Personal Genome Diagnostics (PGDx), is a member of its scientific advisory board and board of directors, and owns PGDx stock. He is also on the Scientific Advisory Board for Ignyta.

This research was sponsored by Bristol-Myers Squibb (Princeton, New Jersey), which also provided both study drugs free of cost. This research was also partially supported by National Institutes of Health grants P30 CA006973 and R01 CA185297, Department of Defense grants W81XWH-13-PCRP-CCA and W81XWH-15-2-0050, and the Bloomberg~Kimmel Institute for Cancer Immunotherapy. Genomic studies were partially supported by National Institutes of Health grant R01 CA121113 and the Commonwealth Foundation.