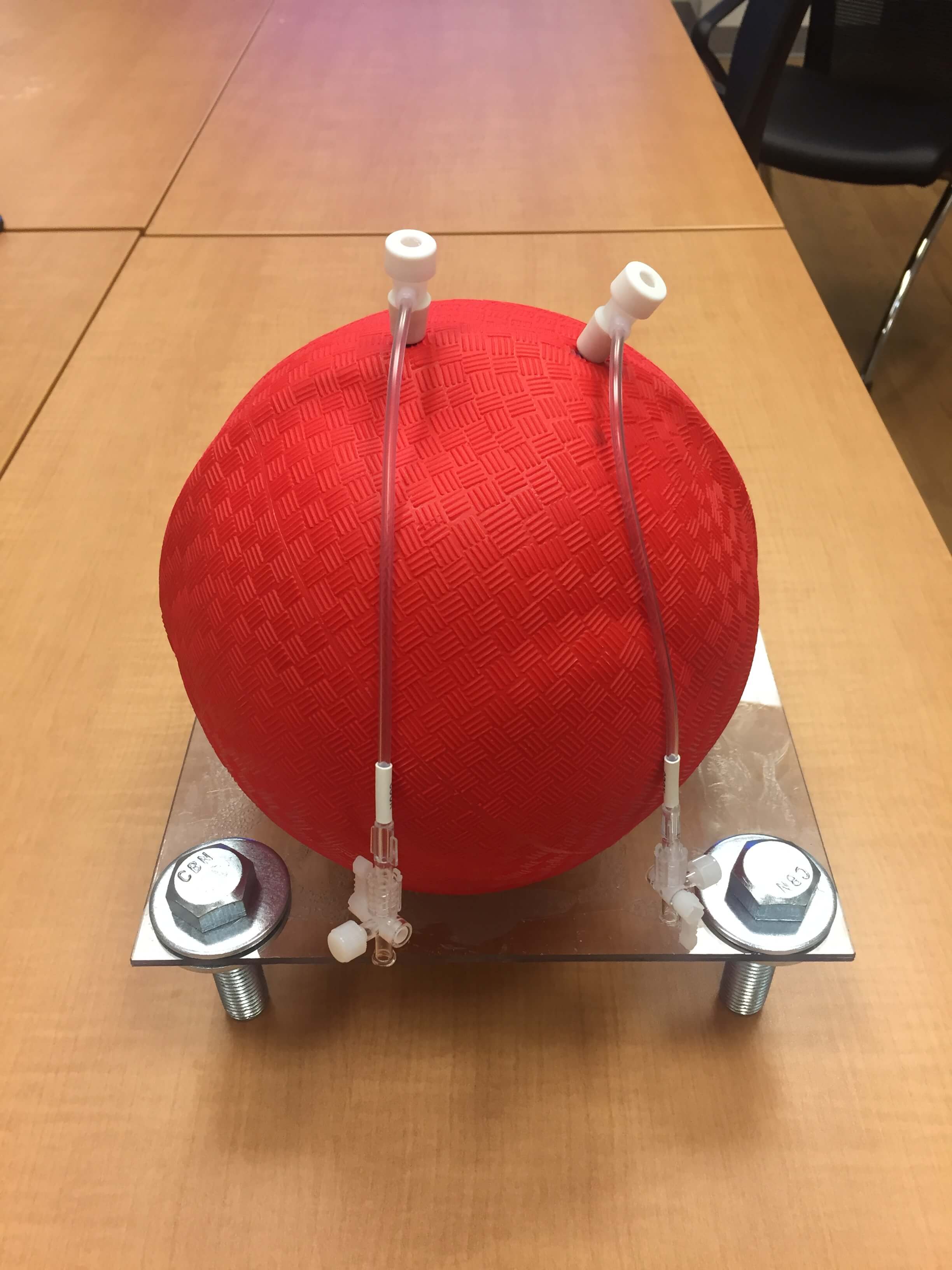 By combining high-tech 3-D printing technology with everyday items such as a kickball and pieces of chicken breast, surgeons at Johns Hopkins report they have devised an innovative way to “rehearse” a complex minimally invasive surgical repair of open lesions on fetal spinal cords inside the womb.

The procedure, called fetoscopic myelomeningocele repair, is performed by a maternal fetal medicine specialist and pediatric neurosurgeon working together to correct a particular form of spina bifida, a birth defect marked by failure of the spinal column to close normally during early fetal development. It occurs in about three to four of every 10,000 pregnancies and can result in permanent nerve damage if left untreated.

The standard of care for the condition is surgery to close the spine as soon after birth as possible, says Jena L. Miller, M.D., an assistant professor of gynecology and obstetrics at the Johns Hopkins University School of Medicine and member of the Johns Hopkins Center for Fetal Therapy. For select patients, prenatal—or fetal—surgery is performed by making an incision on the mother’s abdomen and womb to expose the baby’s back, close the spinal opening, sew up the womb and maternal abdomen, and let the pregnancy continue. Although that approach can successfully reduce the risk of spinal cord damage and disability, it carries risks for the mother’s health and her ability to sustain future pregnancies.

A handful of hospitals, including The Johns Hopkins Hospital, are performing the surgery minimally invasively through two small ports rather than through open, large incisions on the maternal womb.

But, the Johns Hopkins surgeons say, training to do it has been challenging. To address the difficulty, a Johns Hopkins team prepared for its first such procedure last year on the fetus of a 31-year-old woman 25 weeks pregnant by creating models on which to practice.

The work is described in a letter to the editor published online Aug. 29, 2017, in the journal Ultrasound in Obstetrics & Gynecology.

First, the surgeons report, they used ultrasound technology to obtain an accurate image of the fetal spine and lesion. Then, they created mesh models of the region to be operated on and generated a 3-D print model of the area using flexible materials such as Tango (a material with rubberlike properties) and NinjaFlex (a filament with elasticity), adding a combination of silicones to produce a skinlike cover.

The surgeons also used a 10-inch diameter kickball secured to a Plexiglas base to mimic a uterus. “A kickball is about the size of a uterus at that time in pregnancy,” Miller says. “It holds its shape pretty well when sealed and unlike other trainers for laparoscopic surgery, it’s not see-through so it’s a more realistic model.”

For their practice sessions, the team cut two slits in the top of the kickball to serve as ports for surgical instruments. Then, inside the kickball, they placed the 3-D printed model with its silicone cover secured to a plastic fetus over a layer of marbles to mimic the intraoperative motion and instability of the fetus. Then they practiced the surgical steps in that environment.

Besides practicing on the 3-D printed model, they also practiced on a section of a skin-on chicken breast secured to a model of a fetus—placed inside the kickball—to get a better sense of touch for operating on multiple layers of tissue. This was helpful, Miller says, because chicken has more realistic properties than the 3-D printed model.

During their planning, the team members also used a variety of instruments, suture materials and techniques until they achieved consistent times and outcomes for the individual steps of the operation. Their first live surgery went well, consistent with their practice on the 3-D model, and they were able to make a complete watertight closure without complications. The woman had a vaginal delivery at term and the newborn has not required any additional procedures. The team has since used the technique to prepare for six additional cases.

“Repetitive practice by a dedicated surgical team in a patient-matched model lets us know exactly what to anticipate specific to each case,” Miller says. The goal of such rehearsals, Miller adds, is to pre-identify potential obstacles, and decrease operating time and risks. While the new procedure is promising, the surgeons caution that more study is needed to improve training, continue advancing the surgical technique, and reduce surgical time and potential risks of needing to convert to open fetal surgery.

The work was supported by the Fetal Health Foundation.