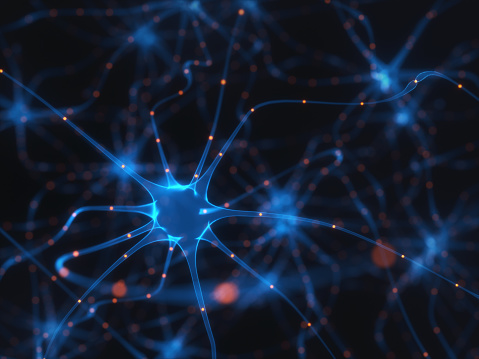 Scientists at Johns Hopkins have used supercomputers to create an atomic scale map that tracks how the signaling chemical glutamate binds to a neuron in the brain. The findings, say the scientists, shed light on the dynamic physics of the chemical’s pathway, as well as the speed of nerve cell communications.

It’s long been known that brain neurons use glutamate as a way to communicate with each other. As one neuron releases glutamate, an adjacent neuron latches onto the chemical through a structure on the neuron’s surface called a receptor. The glutamate-receptor connection triggers a neuron to open chemical channels that let in charged particles called ions, creating an electric spark that activates the neuron.

“All of this happens within a millisecond, and what hasn’t been known is the way receptors latch onto glutamate. Our new experiments suggest that glutamate molecules need to take very particular pathways on the surface of glutamate receptors in order to fit into a pocket within the receptor,” says Albert Lau, Ph.D., assistant professor of biophysics and biophysical chemistry at the Johns Hopkins University School of Medicine.

For the research, the Johns Hopkins scientists used a supercomputer called Anton, which is run by the Pittsburgh Supercomputing Center. They also worked with researchers at Humboldt University in Berlin who specialize in recording how charged particles flow between biological membranes.

A report of the experiments will be published in the Jan. 3 issue of Neuron.

To develop their model of how glutamate might connect to brain cell receptors, Lau and Johns Hopkins research fellow Alvin Yu used a computing technique called molecular dynamic simulations, which was developed by Martin Karplus, Michael Levitt and Arieh Warshel and earned them a Nobel Prize in 2013. The simulations use Sir Isaac Newton’s laws of motion and a set of mathematical rules, or algorithms to assign energy functions to atoms and the substances made from those atoms.

“It takes an enormous amount of computer processing power to do these types of simulations,” says Lau.

In their experiment, Yu and Lau immersed glutamate molecules and a truncated version of the glutamate receptor in a water and sodium chloride solution. The supercomputer recorded dynamics and interactions among nearly 50,000 atoms in the solution.

“There are many ways glutamate can connect with a receptor,” says Lau. But some pathways are more direct than others. “The difference is like taking the faster highway route versus local roads to get to a destination.”

Yu and Lau counted how frequently they saw glutamate in every position on the receptor. It turns out that glutamate spends most of its time gliding into three distinct pathways.

“What we see is an electrostatic connection, and the path glutamate follows is determined by where the charges are,” says Lau. In the world of physics, when two objects near each other have opposing electrical charges, they attract each other.

Lau says that the positively charged residues on the glutamate receptor may have evolved to shorten the time that glutamate takes to find its binding pocket.

To test this idea, Lau teamed up with scientists at Humboldt University to introduce mutations into the gene that codes for the glutamate receptor to change positively charged residues into either negatively charged or uncharged ones.

Then, they measured the resulting electrical currents to determine if there was a change in the rate of the receptor’s activation in the presence of glutamate.

The results of that experiment showed that mutated glutamate receptors activated at half the speed of the normal version of the receptor.

“If, as we think is the case, communication between neurons has to happen at a particular rate for effective brain activity, then slowing down that rate means that the brain won’t work as well,” says Lau. “We believe that these glutamate receptors have evolved a way to speed up the binding process.”

The scientists add that, in some cases, glutamate seems to be able to bind to the receptor upside down. When this happens, the glutamate receptor’s pocket can’t close entirely, possibly making it unable to fully open its channels to allow ions into the neuron.

Lau says that further research is needed to determine if other compounds that target the glutamate receptor, such as quisqualic acid, which is found in the seeds of some flowering plants, tread the same three pathways that glutamate tends to follow.

The Johns Hopkins’ team collaborators in Berlin were Héctor Salazar and Andrew Plested.

The research was funded by the National Institutes of Health’s National Institute of General Medical Sciences (R01GM094495), the European Commission GluActive grant and the German Research Foundation Cluster of Excellence NeuroCure grant.