ICTR in the News: Johns Hopkins Go Team Embarks on Medical Humanitarian Mission to Help Victims of Hurricanes Maria and Irma in Collaboration with Bloomberg Philanthropies 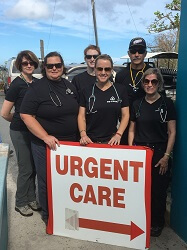 A team of medical experts from Johns Hopkins Go Team is on the island of St. John to provide and support patient care in the aftermath of hurricanes Maria and Irma. In collaboration with Bloomberg Philanthropies, this humanitarian mission brings much-needed supplies, medicines and medical personnel to the badly damaged clinic and triage center on the island.

On Sept. 20, Hurricane Maria tore through the Caribbean as a Category 5 storm, slamming Puerto Rico and the U.S. Virgin Islands, only about two weeks after Hurricane Irma, another Category 5 storm, wreaked havoc on the island with its 185 mph winds.

“We are honored to join Bloomberg Philanthropies to do our small part in helping our fellow Americans recover from this devastation,” says Redonda Miller, M.D., M.B.A., president of The Johns Hopkins Hospital. “The things we all take for granted, like our daily prescriptions, antibiotics and basic medical assistance, are scarce in the affected areas right now. We are grateful for the opportunity to do what we can to help.”

The Johns Hopkins Go Team is a multidisciplinary team, organized by the Johns Hopkins Office of Critical Event Preparedness and Response (CEPAR), which can rapidly deploy to areas impacted by natural or man-made disasters to assist with urgent medical needs. A total of six Go Team members have been deployed to St. John: two physicians, a clinical psychologist, a nurse practitioner and two registered nurses. 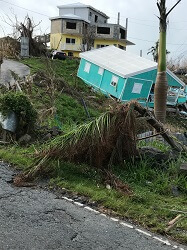 Damage after hurricanes Irma and Maria on St. John.

“Our team members are well prepared and experienced in helping after natural disasters like this one,” says Gabor Kelen, M.D., director of CEPAR and the Department of Emergency Medicine. “Johns Hopkins experts deployed after hurricanes Katrina and Rita in 2005, as well as the earthquake in Haiti in 2010, to bring Johns Hopkins Medicine’s assistance to those trying to recover from the devastation.”

Pictures that include members of the Go Team and damage from St. John are available for media to download. Click here.