The following article profiles an award given to ICTR researcher John Fetting, M.D., an associate professor of oncology, specializing in breast cancer at the Johns Hopkins Kimmel Cancer Center. 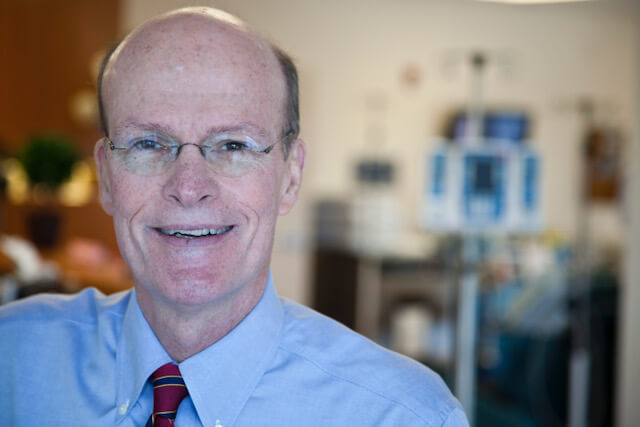 A Johns Hopkins breast cancer doctor will be honored by the Baltimore Orioles as a Birdland Community Hero at the team’s Mother’s Day game at Oriole Park at Camden Yards.

John Fetting, M.D., an associate professor of oncology, specializing in breast cancer at the Johns Hopkins Kimmel Cancer Center, was nominated for the award by one of his patients, Leslie Ries, for starting a program at Johns Hopkins that focuses on the prevention of breast cancer.

Fetting will be honored on Sunday, May 13, Mother’s Day, during the Orioles game against the Tampa Bay Rays, with an in-game ceremony at the conclusion of the fifth inning. Each year, Major League Baseball and the Orioles raise awareness and funds for breast cancer research on Mother’s Day weekend.

In her nomination of Fetting to the Orioles, Ries said she was treated by Fetting after being diagnosed with an aggressive form of breast cancer in 2004. She and her husband established The John Fetting Fund for Breast Cancer Prevention at Johns Hopkins to support research into treatment options and the quest for a cure for breast cancer.

The fund supports basic and translational breast cancer prevention research performed by or under the direct supervision of the faculty of the Johns Hopkins Breast Cancer Program. The current priorities are to discover changes in breast tissue DNA that identify women at-risk for breast cancer and its consequences and to develop safe and effective natural products and drugs to prevent breast cancer.

“The research currently underway and planned for the future provides hope for many families, including our own,” Ries said in the nomination.

”Prevention of breast cancer is not a feel-good pipe dream,” Fetting said. “It is as real a possibility as a cure. It is time we recognize this and place the same effort and resources in the science of breast cancer prevention.”

“You have exemplified this spirit through the work and service you have provided to our community and we would like to recognize you during an upcoming game,” the Orioles wrote in a letter to Fetting.

Approximately one in eight women in the United States will be diagnosed with breast cancer during their lifetime. However, more than 90 percent will be alive at 5 years after their diagnosis.