The following article profiles grant awards and work performed in part by ICTR researchers Marco Grados of the Division of Child and Adolescent Psychiatry; Sadie Peters of Johns Hopkins Community Physicians; Rachel Thornton of the School of Medicine and Bloomberg School of Public Health; Jacky Jennings of the School of Medicine; and Joel Gittelsohn of the Department of International Health.

Of the [grant-winning projects announced Monday](http://www.21cc.jhu.edu/what-we-do/research/2017-seed-grants/], five are based in Baltimore, including one that examines the health impacts of the city’s vacant property turnover program and another that aims to boost Latino civic activism. The one project outside Baltimore looks at an experimental housing model in Buenos Aires, Argentina. 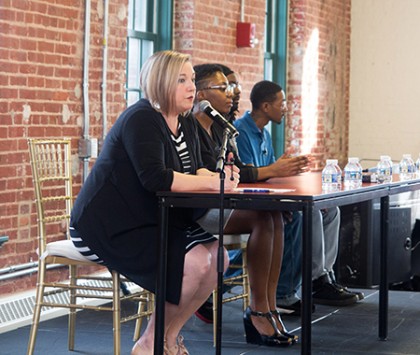 Ben Seigel, director of 21CC, calls these short-term projects “the signature research product” for the Johns Hopkins initiative, which focuses on revitalizing cities. This is 21CC’s second round of the seed grants, after an inaugural launch of six projects last year.

This time around, 21CC selected the winners from 27 initial proposals, Seigel said. The cross-disciplinary projects were required to include a Hopkins faculty member and a local partner, such as city agency or nonprofit. They cover one of three focus areas: mixed-income neighborhoods, economic inclusion, or neighborhood health and safety.

A roundup of the grant-winning projects is below; researchers are from Johns Hopkins unless otherwise noted.

The reconfiguration of Buenos Aires’ urban environment since the 1990s has resulted in a rising number of evictions and struggles for housing space. The project will study the impact of the government-run Program for Self-Managed Housing, an experimental, community-based model.

Little is known about how intentionally including Latino immigrants in neighborhood associations affects the community’s ability to address violence and crime, or how such inclusion affects social cohesion. The project will use observation, surveys, and interviews to examine barriers to Latino participation in local associations.

The School and Housing Market Relationship in an Era of Choice

Health in All Policies: Evaluating the Use of Alcohol Outlet Zoning Policy to Improve Health, Safety, and Economic Conditions in Urban Neighborhoods

The project will assess the impact of new zoning policies for alcohol-selling establishments in Baltimore, which have been known as crime attractors. Researchers will look at the health, safety, and economic conditions of residents in affected neighborhoods.

This study will lay the groundwork for assessing the health impacts of Baltimore’s Vacants to Value program, launched in 2010 to target substandard properties for renovation and transfers. The team will develop neighborhood case studies and interview city officials, nonprofits, and developers to analyze preliminary impacts of V2V. with the goal of generating data inventories and maps.

The study will examine why low-income Baltimore youth often pursue short-term degrees from for-profit programs instead of more lucrative four-year college degrees, looking at the factor of adverse life events that create instability. The team will then design interventions to prevent such educational interruptions.