At Washington, D.C., event, researchers from across JHU showcase their work made possible by federal funding

Research is central to the mission of Johns Hopkins University, a founding principle that dates to the inaugural address of the university’s first president, Daniel Coit Gilman, in 1876.

The showcase, called Hopkins on the Hill, takes place Tuesday, June 13 from 5 to 7:30 p.m. in the Kennedy Caucus Room in the Russell Senate Office Building in Washington, D.C.

“We are thrilled to showcase these remarkable, early career researchers whose scientific investigations and innovations represent just a fraction of the publicly funded research underway at Johns Hopkins,” JHU President Ronald J. Daniels said. “This work truly reflects the impact of our researchers and the extraordinary ways they are advancing discovery for the good of our world.” 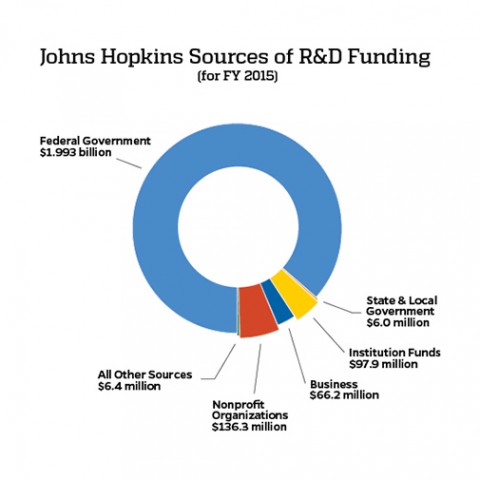 Federal funding for research and development has declined in each of the past four years and faces further cuts under the proposed budget sent to Congress by the Trump administration.

Daniels has long been an advocate for the importance of federal support for research, especially for young researchers. Johns Hopkins has led U.S. universities in research and development spending for 37 consecutive years, putting a record $2.306 billion in FY2015 into projects to cure disease, promote human health, advance technology, and expand knowledge of the universe and ourselves.

“One of the things that has been so remarkable about this country, the genius of this country, has been its willingness to invest where other countries have not, in basic R&D, and recognizing that that investment will have a whole host of consequences that will improve [life in] this country … in ways we can’t possibly imagine,” he said in a 2015 video released by The Science Coalition.

Researchers and practitioners participating in the Capitol Hill showcase represent divisions across the JHU enterprise, including the Applied Physics Laboratory, the Bloomberg School of Public Health, the Carey Business School, Jhpiego, the Krieger School of Arts and Sciences, the Peabody Institute, the School of Medicine, the School of Nursing, and the Whiting School of Engineering.

“Johns Hopkins continues to attract significant financial support for work that benefits humanity, makes the world a better place, and grows our understanding of our cosmos and ourselves,” says Denis Wirtz, vice provost for research at Johns Hopkins University. “We are proud to share breakthroughs that benefit our city, our country, and our world.”

The researchers participating in the showcase and their areas of federally funded research are:

School of Nursing
Kamila Alexander’s research has received funding from the NIH’s National Institute of Nursing and National Institute of Mental Health. Her work defines and studies social and behavioral influences on violent, sexual, and reproductive behaviors such as intimate partner violence, unplanned pregnancies, and sexually transmitted infections. She also examines the mental health consequences and reproductive health effects of poverty-related trauma and experiences of violence.

Krieger School of Arts and Sciences
Xin Chen’s research into how human cells divide and differentiate during pregnancy has been funded by the National Institute of General Medical Sciences and the National Institute of Child Health and Human Development. Her research has a broad impact on stem cell biology, developmental biology, regenerative medicine, and epigenetics.

School of Medicine
Examining chronic kidney disease, Deidra Crews focuses on health disparities and how social determinants of health, such as poverty and food access, affect kidney disease outcomes. Her research has received funding from the Centers for Disease Control and Prevention; the Health Resources and Services Administration; the National Institute of Diabetes and Digestive and Kidney Diseases; and the National Institute on Minority Health and Health Disparities.

Applied Physics Laboratory
Funded by the Office of Naval Research, Kostas Gerasopoulos and his team are engineering surfaces with different wettability for water recovery, distillation, and dehumidification. Basing his research on the ability of tropical plants to absorb and repel water, Gerasopoulos’s novel surfaces have applications in capturing water from fog, water purification, and power generation.

School of Medicine
Bioengineer Jordan Green and his team design and synthesize new biological materials and systems that can deliver medicines and small molecules specifically to various cell types, including cancer cells. His lab is committed to developing nanotechnology-based medicines such as targeted anti-cancer therapeutics, regenerative therapies, and immunotherapies. His research has been funded by the Department of Defense, various institutes within the NIH, and the National Science Foundation.

Bloomberg School of Public Health
Jeff Leek’s research group focuses on how scientists analyze, share, and use data. He applies his expertise to organizing and curating genomic data and assessing how that data can be used for public health. His research has received funding from the NIH’s National Cancer Institute, the National Institute for Mental Health, and the National Institute of General Medical Sciences.

Jhpiego With funding from the U.S. Agency for International Development, Lindsay Litwin is part of the team that developed the ePartogram, a tablet-based app that improves care for women in labor by providing real-time decision support to birth attendants and access to World Health Organization guidelines and information on managing a woman’s labor. The app also transmits data from the users—the health workers and birth attendants in the field—to remote health providers to build a better understanding of what is needed on the frontlines.

Jhpiego
Tara MacDowell is part of a 65-person team that created the Ebola suit—a breakaway personal protection suit that reduces the risks of exposure to infectious diseases for health workers. Funded by the CDC, the DOD, USAID, and the White House Office of Science and Technology, the suit is in development with DuPont and includes features for easy and fast removal, increased comfort, and increased visibility.

Whiting School of Engineering
Victor Nakano is part of the Johns Hopkins team leading the Materials in Extreme Dynamic Environments program established by the U.S. Army to design, develop, and test protection materials for soldiers and vehicles. With funding from the DOD and the Army Research Office, the MEDE program investigates metals, ceramics, composites, and polymers to protect soldiers and vehicles from blasts and ballistic threats.

Peabody Institute
With funding from the National Endowment for the Arts, Daniel Trahey directs Tuned-In, a community development program that offers full scholarships to promising students in Baltimore City Public Schools. The program has a 100 percent college placement rate for students who have spent more than three years in the program.

Applied Physics Laboratory
Funded by the Office of Naval Research, Wester’s Connecting STEM Outreach Now Using VIE Education for Youth program offers the children of servicemen and women the chance to learn about prosthetics through virtual reality. Children whose loved ones have lost limbs learn about prosthetic technologies and their control methods, as well as the healing process.