ICTR in the News: Heart Failure, The Alzheimer’s Disease of The Heart? 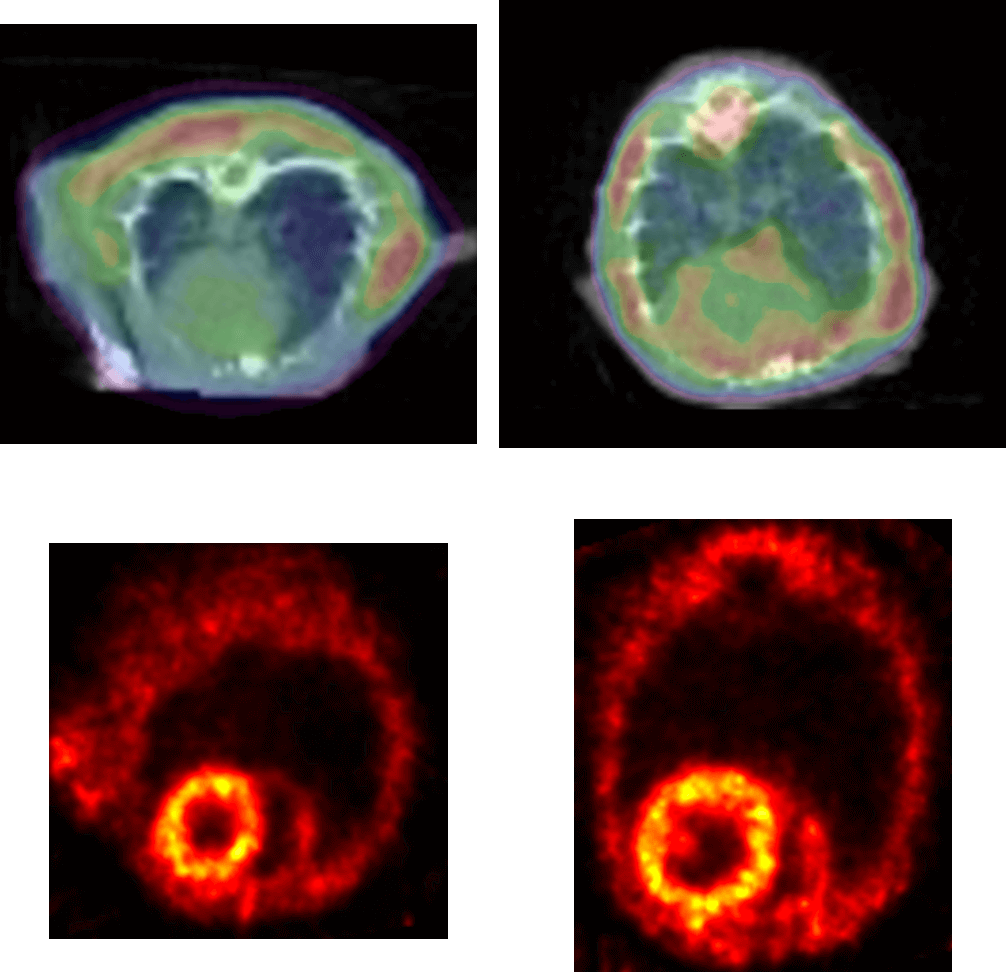 A PET scan detects clumping proteins in rat hearts (top). The enlarged heart (right) is one with heart failure. Other PET scans showing blood flow in the rat hearts (bottom) show that the protein clumps aren’t due to circulation problems. Credit: Courtesy of Circulation Research, May 11, 2018

Similar to how protein clumps build up in the brain in people with some neurodegenerative diseases such as Alzheimer’s and Parkinson’s diseases, protein clumps appear to accumulate in the diseased hearts of mice and people with heart failure, according to a team led by Johns Hopkins University researchers.

In experiments described in the May 11 issue of the journal Circulation Research, the investigators report identifying in diseased hearts the form of the protein that tends to clump, and visualizing it in the heart using a noninvasive positron emission tomography (PET) scan could, they say, lead to advances in monitoring disease progression and testing new therapies.

Heart failure is a chronic condition in which the heart doesn’t fill or pump blood as well as it should, leading to excessive fatigue. About 5.7 million people in the U.S. have heart failure, and about half of people diagnosed will die within five years, according to the U.S. Centers for Disease Control and Prevention.

“From a molecular standpoint there’s not a unified, clear mechanism for why the heart goes into failure,” says Giulio Agnetti, Ph.D., assistant professor of medicine at the Johns Hopkins University School of Medicine and University of Bologna. “But by figuring out this mechanism, we may be able to devise better treatments and diagnostic tools.”

Current drugs used to treat heart failure — such as those that lower blood pressure by relaxing blood vessels — reduce stress on the heart and symptoms associated with heart failure without necessarily fixing the underlying cause. Once the heart fails to pump, the only treatment in the end is a heart transplant.

Previous work by this team, published in 2014, showed that the protein desmin accumulates in clumps called amyloid in the hearts of dogs with heart failure. Desmin is a protein found in the cell’s “skeleton,” or supporting structure, and is known as intermediate filaments. Why it clumps in diseased heart cells isn’t known, Agnetti says.

The team used a common mouse model of heart failure to look for desmin clumps. In this model, the aorta — the main artery coming from the heart — is surgically constricted, which noticeably raises pressure and stress, and causes heart failure. After four weeks of pressure on the aorta, the mice develop symptoms of heart failure such as an enlarged heart and lung congestion. Desmin amyloid was more than doubled in the heart failure mice when using the same antibody and staining techniques used for the human tissue samples.

Then the researchers treated proteins from the mice hearts with epigallocatechin gallate (EGCG) — a chemical from green tea known to break up amyloid. The treatment cut by half the amount of protein clumps.

“Interestingly, green tea has already been demonstrated to curb the incidence of cardiovascular disease as well as improve cognitive impairment in Alzheimer’s models, though the mechanism for such action is unclear,” says Agnetti. “EGCG’s ability to ‘de-clump’ these sticky proteins could be one of green tea’s healthy effects. Knowing how this chemical works could open new avenues for designing a new class of drugs that target protein clumping.”

Next, the researchers wanted to identify the form of desmin that tended to clump. Based on their earlier work, they thought that one or more chemical phosphate groups added to the 27th or 31st building blocks in desmin’s protein structure might affect how the protein clumps. They genetically engineered versions of desmin with one, both or none of the phosphate groups attached to desmin, tagged them with a green fluorescent signal to make them visible, and put them in heart cells using a virus.

A week later, using a microscope to track the green glow, the cells with desmin and two phosphate groups were still pumping, and this form of desmin was incorporated in the muscle fibers. The researchers say they believe this shows that the desmin with two phosphate groups is most likely the normal, healthy version of the protein.

The cells that had a single phosphate on desmin at the 31st position in the protein’s chain of amino acids contracted more rapidly and had more green clumps, leading the researchers to believe that this behaves as the diseased version of the protein.

Agnetti learned from Richard O’Brien, M.D., Ph.D., a former Johns Hopkins neuroscientist now at Duke University, that PET is used to detect protein clumps in the brains of Alzheimer’s and Parkinson’s disease patients and can detect the clumps in certain genetic heart conditions that cause excessive protein clump formation. Following O’Brien’s advice, the researchers tested if they could use this noninvasive technique to detect desmin clumps in mice with heart failure. Healthy and heart failure mice were injected with Amyvid, a radioactive dye that allows the researchers to see the protein clumps by PET. The heart failure mice had 13 percent more of the Amyvid taken up in their hearts than the healthy mice.

“PET imaging of protein clumps may be eventually used in patients to identify structural changes in the heart as the disease progresses, and this information likely holds prognostic value,” says Peter Rainer, M.D., Ph.D., a former postdoctoral fellow at Johns Hopkins who is now at the Medical University of Graz in Austria. “It could be used as a nice measure of the effect of an intervention to halt or reverse disease progression.”

In future experiments, the research team plans to confirm its results in more human tissue samples. The investigators also hope to identify a drug or small molecule to prevent desmin from forming clumps.

“There is a lot of emphasis placed on the role of genes in modern times, but we’re born with our genes and at present we can do very little about the ones we have,” says Agnetti. “I think the next step is to follow up with the proteins that are dynamically modified in response to environment, which places a larger emphasis on lifestyle intervention to help prevent diseases. Natural compounds like EGCG in green tea and modified dietary interventions could play a role in keeping us healthy.”