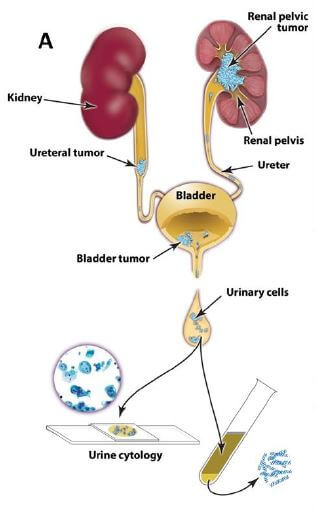 The UroSEEK test looks for cancer mutations found in the urine from the ureter and bladder in samples taken during routine examinations. Credit: eLife Sciences Publication

Researchers at The Johns Hopkins Kimmel Cancer Center have developed a test for urine, gathered during a routine procedure, to detect DNA mutations identified with urothelial cancers.

UroSEEK uses urine samples to seek out mutations in 11 genes or the presence of abnormal numbers of chromosomes that would indicate the presence of DNA associated with bladder cancer or upper tract urothelial cancer (UTUC).

These findings were published online on March 20 in eLife.

“There were nearly 80,000 new cases of bladder cancer and more than 18,000 deaths in 2017,” said George Netto, M.D., a senior author on the UroSEEK paper, formerly at The Johns Hopkins University and currently chair of pathology at the University of Alabama-Birmingham. “This is about using the urine to detect the cancer. UroSEEK is a method of detection that many people have tried to find that is noninvasive.”

Most cancers are curable if they are detected early, and the researchers are exploring ways to use cancer gene discoveries to develop cancer screening tests to improve cancer survival. They announced the development of CancerSEEK, a single blood test that screens for eight cancer types, and PapSEEK, a test that uses cervical fluid samples to screen for endometrial and ovarian cancers.

UroSEEK is aimed toward early detection of bladder cancer in at-risk patients, those who may have blood in their urine or people who smoke, as well as patients who have already gone through a procedure to treat bladder cancer and need to be monitored for any recurrence of the disease.

“In almost one-third of patients, bladder cancer detection is late. The cancer has already gotten into the surrounding muscle,” Netto said. “Even in those detected at an earlier stage, the tumors frequently recur. Patients are committed to a lifelong surveillance that requires invasive cystoscopy procedures and biopsies and is costly.”

Saying current noninvasive approaches for detection of urothelial cancer are suboptimal, researchers wanted to develop a test for bladder and UTUC cancer that would allow it to be found sooner and cheaper than current methods using cytology, which is not particularly sensitive and does not do well in detecting low-grade bladder cancer or UTUC.

Researchers studied 570 patients who were considered at risk for bladder cancer and found UroSEEK was 83 percent positive in those who developed cancer. When combined with cytology, the sensitivity increased to 95 percent of patients who developed the disease.

“When you combine them, you get better results,” said Nickolas Papadopoulos, Ph.D., a senior author and an investigator at the Ludwig Center at Johns Hopkins. “Side by side, UroSEEK has better sensitivity. There are some cases when cytology detects when UroSEEK doesn’t. Combining them produces the best results.”

Bladder cancer has a high rate of recurrence, according to David McConkey, Ph.D., director of the Johns Hopkins Greenberg Bladder Cancer Institute.

UroSEEK, when combined with cytology, detected mutations in 71 percent of a group of 322 patients who had been treated for bladder cancer and were in the surveillance stage. Cytology alone detected recurrences in only 25 percent of those patients.

Of 56 patients with upper tract urothelial cancer, 75 percent tested positive using UroSEEK, including 79 percent of those with noninvasive tumors. Cytology detected upper tract urothelial cancers in only 10 percent of those patients. These UTUC patients were from Taiwan, where the occurrence of UTUC is high due to the medicinal use of herbs containing aristolochic acids, which are associated with kidney damage and urinary tract cancer.

The researchers said the added sensitivity of using UroSEEK and cytology together could improve the management of patients with cancer, sparing cystoscopy, an endoscopy of the urinary bladder via the urethra, on certain occasions. Patients with hematuria (blood in the urine) could be tested by UroSEEK and cytology before a cystoscopy procedure, potentially resulting in considerable financial savings for those who did not test positive.