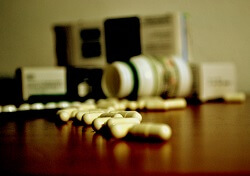 “We found that a very small percentage of patients use nonopioid medications such as ibuprofen and acetaminophen in addition to opioids to help manager their pain,” says Mark Bicket, M.D., assistant professor of anesthesiology and critical care medicine at the Johns Hopkins University School of Medicine and the paper’s first author.

“It’s clear we need to empower patients to ask their physicians about nonopioid pain management options, as well as call on prescribers to be more thoughtful of their prescribing practices,” says Bicket.

Bicket adds that if pain is more frequently managed with nonopioid options, fewer opioids will need to be prescribed and patients will have less available to be lost, sold, taken by error or accidentally discovered by a child.

In one of Bicket’s earlier studies, he reviewed half a dozen studies and found that most opioid pills prescribed after surgery went unused, and almost all patients failed to properly dispose of the leftovers.

To further examine what happens to opioid pills after they are prescribed, as well as to determine whether patients used nonopioid medications in conjunction with their prescribed opioid prescriptions as recommended by evidence-based guidelines, the researchers recruited 140 inpatient adult spine and joint surgery patients at The Johns Hopkins Hospital from August to November 2016. Of the 140 patients in the study, 47 percent were women, the average age was 56, 58 percent reported a history of chronic pain and 74 percent were white.

Bicket and his team collected patient data such as history of substance abuse, self-reported pain scores and preoperative opioid use through in-person interviews and electronic health records. The researchers also conducted phone surveys after surgery at two days, two weeks, one month and six months to determine if and when patients stopped taking opioids, how many opioid tablets they had left, what other nonopioid pain treatments they used, and their knowledge and practice regarding safe opioid storage and disposal per the Food and Drug Administration’s recommendations.

Of these patients, very few used nonopioid medications in conjunction with opioid products throughout the study period. Two days after surgery, 82 percent of patients reported not using nonsteroidal anti-inflammatory drugs (NSAIDs) and 44 percent reported not using acetaminophen. Only 5 percent used both NSAIDs and acetaminophen. One month post-surgery, only 6 percent of patients reported use of multiple nonopioid medications.

While it’s difficult to definitively say how many MMEs are dangerous to take at one time, Bicket says 200 MME is considered by some experts as the dosage at which a patient who has never had opioids would overdose.

The majority of patients also reported unsafe storage (91 percent) and failure to dispose of (96 percent) opioids one month after surgery, as suggested in FDA guidelines.

Other authors on this paper include Elizabeth White, Peter J. Pronovost, Christopher L. Wu and G. Caleb Alexander of the Johns Hopkins University; and Myron Yaster of Children’s Hospital Colorado.