ICTR in the News: Drug Reduces Size of Some Lung Cancer Tumors, Relapse Rate After Surgery 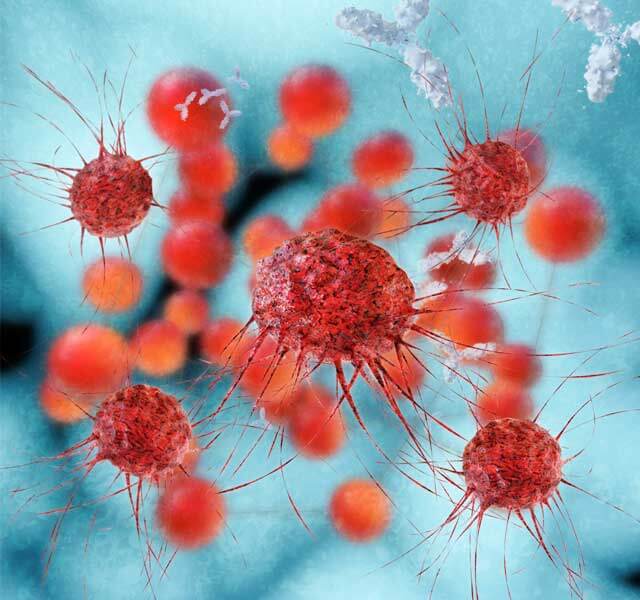 A drug given to early stage lung cancer patients before they undergo surgery showed major tumor responses in the removed tumor and an increase in anti-tumor T-cells that remained after the tumor was removed, which resulted in fewer relapse cases in the patients.

The research teams at the Johns Hopkins Bloomberg~Kimmel Institute for Cancer Immunotherapy, the Johns Hopkins Sidney Kimmel Cancer Center and the Memorial Sloan-Kettering Cancer Center wanted to find out if providing nivolumab, an anti-PD-1 drug, would stimulate anti-tumor immunity in patients with non-small-cell lung cancer (NSCLC) who were going to have their tumors surgically removed.

The study showed after 21 patients received two doses of nivolumab before surgery, there was a major pathologic response in 45 percent of the removed tumors and no delays in any of the planned surgeries. In addition, neoantigen-specific T-cell clones were stimulated by the drug and present in the blood and tumor but disappeared from the body after the tumor was removed.

The study was published in the New England Journal of Medicine on April 16, 2018.

“We wanted to look at the patients’ tumor and immune system prior to treatment and examine it again after treatment for changes,” said Patrick Forde, M.B.B.Ch., first author and co-principle investigator of the trial and a lung cancer oncologist in the Bloomberg~Kimmel Institute of Cancer Immunotherapy. “We found tumor regression in almost half of these early stage lung cancer patients. We weren’t expecting to see major pathology with only two doses (of nivolumab).”

Forde said the number of gene mutations in the tumor correlated closely with response to treatment and was a potential predictive marker for future studies. The research teams discovered new infiltration of immune cells into the lung cancer after the drug was administered.

“Given that phase 3 clinical trials are underway, using this neoadjuvant anti-PD-1 drug will likely be practice changing,” said Drew Pardoll, M.D., Ph.D., senior author, director of the Bloomberg-Kimmel Institute for Cancer Immunotherapy and co-director of the Cancer Immunology Program at the Kimmel Cancer Center.

“There was a major pathological response in almost half the patients, the tumor was almost totally overrun by lymphocytes at the time of resection, and we were able to demonstrate using a new assay we developed that tumor-specific T-cells spilled out into the blood after treatment.”

Twenty-one patients enrolled in the study were 18 years of age and older and had stage I, II or IIIA NSCLC that was deemed resectable. Twenty of the 21 received 3 mg/kg of nivolumab intravenously every two weeks for two doses prior to surgery. One patient underwent an uncomplicated surgery after only one dose.

Twenty patients underwent complete tumor resection after receiving the drug. Upon follow-up after surgery, 16 of the 20 patients were alive and recurrence-free. One patient without recurrence died from a traumatic head injury unrelated to the study.

Three patients experienced tumor relapse. Two of the patients underwent further treatment and have not had further recurrence. One patient died of relapsed metastatic cancer about 16 months after surgical resection.

Pardoll said historically, approximately 50 percent of NSCLC patients who undergo surgery will relapse. Chemotherapy can add about 5 percent to survival but introduces toxicity to surrounding tissue. The results from the study showed neoadjuvant anti-PD-1 treatment could enhance the priming of anti-tumor T-cells, potentially eliminating micro-metastatic cancer that can cause post-surgical relapse.

“That T-cells, activated by immunotherapy prior to surgery, can intercept rogue tumor cells throughout the body after the patient’s operation and prevent the cancer from recurring may be a game-changer. This notion of ‘cancer interception’ has the potential to stop cancer in its tracks, helping turn cancer patients into long-term survivors, and it is a significant focus for (Stand Up To Cancer). We look forward to learning the results of the follow-up clinical studies that are underway to see how this breakthrough benefits a larger number of patients,” said Stand Up To Cancer President and CEO Sung Poblete, Ph.D., RN.

Larger studies are needed to examine the effects of combination immunotherapies, longer courses of a neoadjuvant drug and to define the role of the anti-PD-1 in reducing recurrences and curing early stage cancers.

“The potential to transform treatment of lung cancer patients resulting from this groundbreaking work by Forde, Pardoll, and other members of the SU2C-CRI Immunology Dream Team demonstrates the power of cross-disciplinary collaboration to advance lifesaving translational research, where the laboratory and clinic meet, and underscores the importance of continued efforts to explore fully immunotherapy’s promise at various stages of treatment along the entire patient journey,” said Jill O’Donnell-Tormey, Ph.D., CEO and director of scientific affairs at the Cancer Research Institute.