The following article profiles work performed in part by ICTR researcher Pablo A. Celnik, M.D., professor of physical medicine and rehabilitation, neurology, and neuroscience at the Johns Hopkins University School of Medicine. 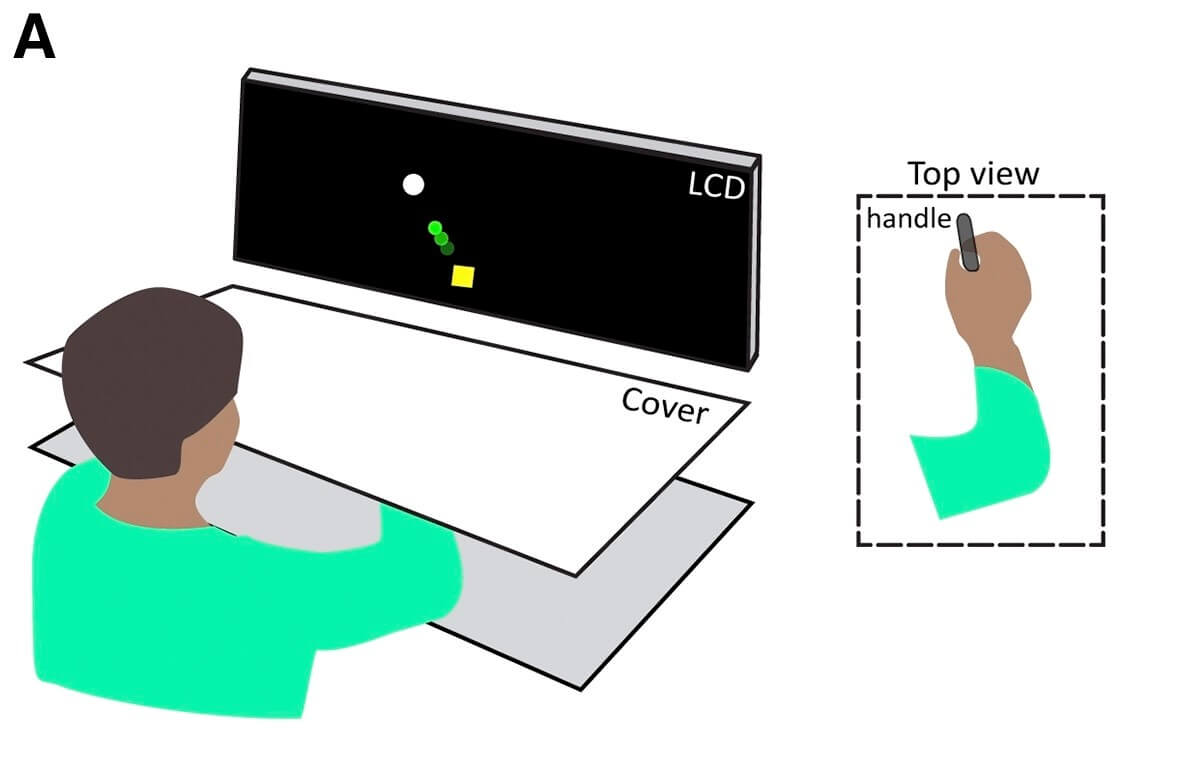 Participants sat in front of a computer monitor and made reaching movements while holding a handle, whose position was recorded on a digitizing tablet. Credit: Cell Reports

Practicing a movement does make future similar movements happen faster, but not because the brain “anticipates” demand for them

Researchers in the Department of Physical Medicine and Rehabilitation at Johns Hopkins Medicine report that a computerized study of 36 healthy adult volunteers asked to repeat the same movement over and over became significantly faster when asked to repeat that movement on demand—a result that occurred not because they anticipated the movement, but because of an as yet unknown mechanism that prepared their brains to replicate the same action.

The findings, the researchers say, add another clue to a growing body of research on how the brain generates movement in the first place, and could eventually help scientists understand how brain-controlled motor responses go awry after neurologic disease or injuries such as strokes.

Since the early 1950s, researchers have known that repeating a movement can improve the reaction time required to generate it later says study author Adrian Mark Haith, Ph.D., assistant professor of neurology at the Johns Hopkins University School of Medicine. This effect has long been attributed to “anticipation”—being prepared to repeat a movement by default in accordance with expectations about which movement would most likely be required.

However, other experiments using transcranial magnetic stimulation—a technique that uses magnetic pulses to stimulate the brain and record responses—show that repeating movements can actually bias the movements that occur when stimulating the brain’s motor cortex, making typically random movements more like the one that was practiced.

“These studies suggest that something other than anticipation might be happening with repetition,” Haith says.

The researchers recruited 36 right-handed adult volunteers, 22 of whom were women, ranging in age from 19 to 30 years. Each of the volunteers sat at a desk in front of a large computer screen. On the desktop was a touch-responsive tablet. When a target appeared on the screen, the volunteers were asked to move a cursor to touch the target as quickly as possible using a stylus on the tablet.

In initial tests, the volunteers took about 215 milliseconds (each millisecond is 1/1000th of a second) to respond and reach the changing target, no matter what direction they moved their hands. However, after practicing moving the cursor hundreds of times in just a single direction, the volunteers became significantly faster at responding and moving the cursor toward the target in that direction, even though their reaction times stayed the same when the target appeared in other directions.

“The benefit you get is 20 to 30 milliseconds,” says Celnik. “It sounds small, but when you’re looking at performance that can make a difference in sports and other areas that require quick motor movements, that time increment might mean the divide between a winner and a loser.”

The scientists reasoned that there were two possibilities for the subjects’ decreased reaction times: One idea is that they had learned to anticipate the movement and were guessing that the target would appear in the preferential (usual) direction from force of habit. Another is that repetitive practice somehow trained their brains to select the practiced movement more quickly in the future while still allowing the subjects the same amount of flexibility as before they practiced to choose other targets.

To tease apart those possibilities, the researchers tried another experiment much like the previous ones in which the subjects were asked to move their hand toward a target that appeared on the screen, but with a twist: they were asked to move their hand on every fourth beat of a metronome, whether the target appeared or not. When the target did appear, it showed up in various time intervals right before the fourth beat, effectively imposing a reaction time on each trial.

If, as previous theories held, the subjects were anticipating movement in the practiced direction, the researchers reasoned they’d preferentially move their hand in that direction when the target failed to show up, or when the reaction time was so narrow that they wouldn’t have time to accurately hit the target. However, that wasn’t the case, says Firas.

“The subjects did have preferred directions for moving their hands when they had to guess, but it was mostly directions comfortable for right-handed people,” he says. “They either chose up and to the right or down and to the left, rather than in the direction they’d practiced.”

Together, the researchers say, these results, published in the July 24, 2018 Cell Reports, suggest that repeating a movement many times somehow primes the brain to be more efficient at making that movement in the future.

Celnik says he and his team plan to investigate what’s happening in the brain itself to better understand this effect. Gaining insight on the neural mechanisms behind the phenomenon, he adds, could lead to more effective therapies for stroke and other disorders that affect the brain’s control over body movement.

This study was supported by the NIH/National Institute of Child Health and Human Development grants R01HD053793 and R01HD073147 and the Division of Behavioral and Cognitive Sciences NSF BCS 1358756.