ICTR in the News: Air Pollution May Directly Cause Those Year-Round Runny Noses, According to a Mouse Study 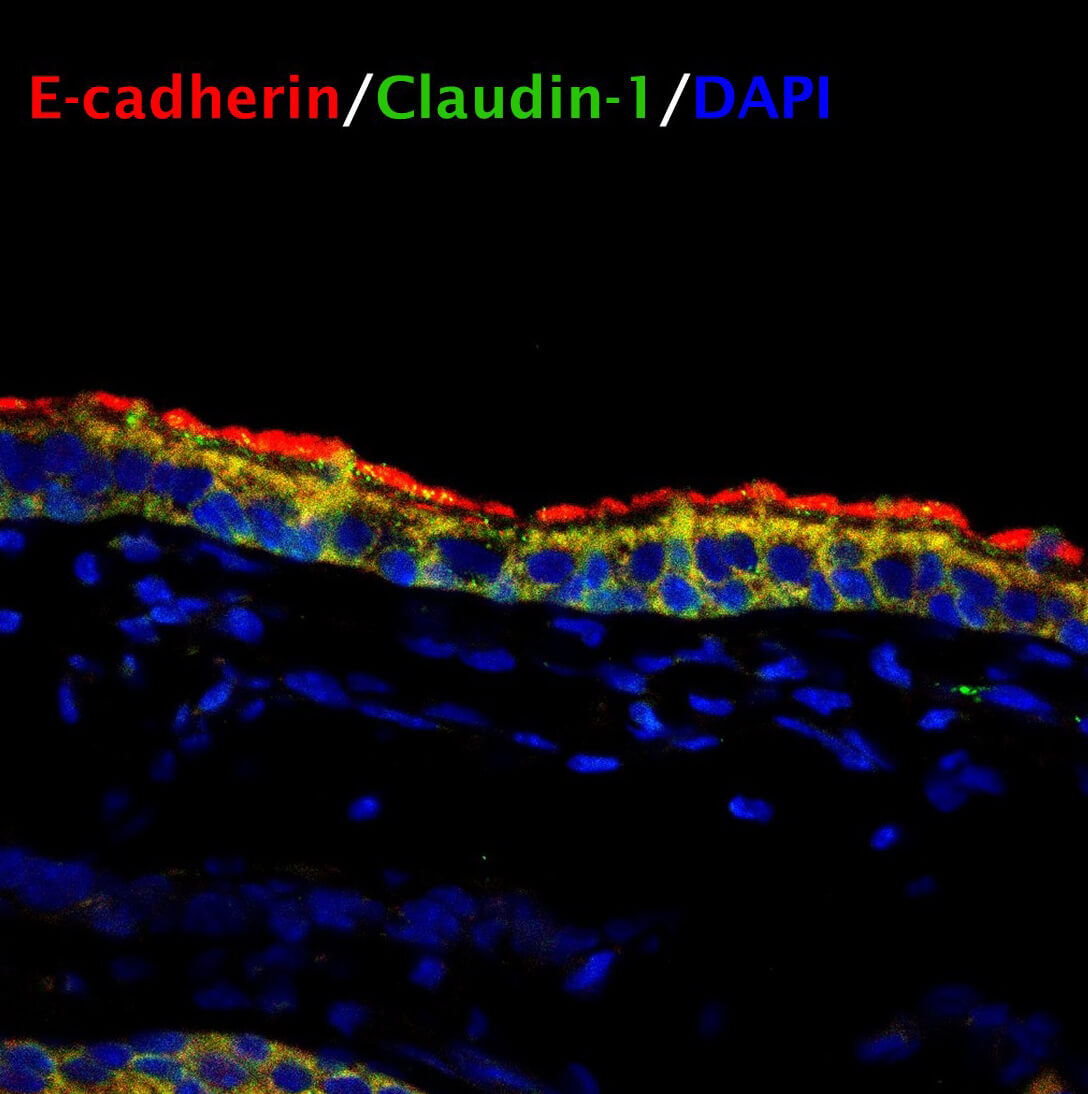 Sinuses of mice that inhaled filtered air. The sinus surface is an intact barrier as seen by the presence of proteins that hold the cells together such as E-cadherin (red). Credit: Ramanathan lab

Although human population studies have linked air pollution to chronic inflammation of nasal and sinus tissues, direct biological and molecular evidence for cause and effect has been scant. Now, Johns Hopkins researchers report that experiments in mice continually exposed to dirty air have revealed that direct biological effect.

Researchers have long known that smog, ash and other particulates from industrial smokestacks and other sources that pollute air quality exacerbate and raise rates of asthma symptoms, but had little evidence of similar damage from those pollutants to the upper respiratory system.

The new findings, published in the American Journal of Respiratory Cell and Molecular Biology, have broad implications for the health and well-being of people who live in large cities and industrial areas with polluted air, particularly in the developing world.

“In the U.S., regulations have kept a lot of air pollution in check, but in places like New Delhi, Cairo or Beijing, where people heat their houses with wood-burning stoves, and factories release pollutants into the air, our study suggests people are at higher risk of developing chronic sinus problems,” says Murray Ramanathan, M.D., associate professor of otolaryngology – head and neck surgery at the Johns Hopkins University School of Medicine.

According to the Centers for Disease Control and Prevention, more than 29 million people in the U.S. or more than 12 percent of adults have a chronic sinusitis diagnosis. Chronic sinusitis can cause congestion, pain and pressure in the face, and a stuffy, drippy nose. 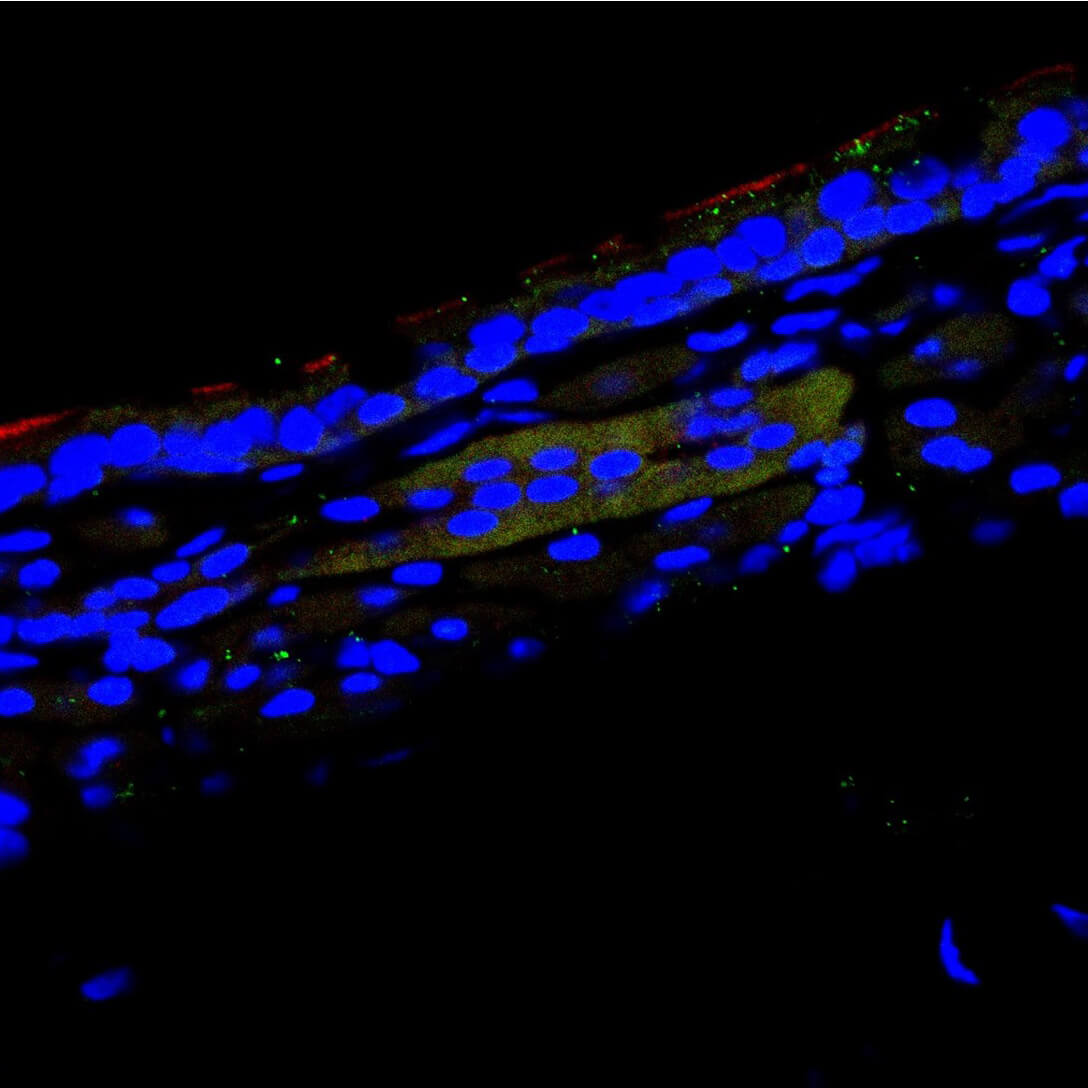 Sinuses of mice that inhaled polluted air. The sinus surface is breached as seen by the reduction in proteins that hold the cells together, such as E-cadherin (red). Credit: Ramanathan lab

To see how pollution may directly affect the biology of the upper airways, the researchers exposed 38 eight-week-old male mice to either filtered air or concentrated Baltimore air with particles measuring 2.5 micrometers or less, which excludes most allergens, like dust and pollen. The aerosolized particles, although concentrated, were 30 to 60 percent lower than the average concentrations of particles of a similar size in cities like New Delhi, Cairo and Beijing.

Nineteen mice breathed in filtered air, and 19 breathed polluted air for 6 hours per day, 5 days a week for 16 weeks.

The researchers used water to flush out the noses and sinuses of the mice, and then looked at the inflammatory and other cells in the flushed-out fluid under a microscope.

To see if the cells flushed out of the nasal and sinus passages had turned on a generalized inflammatory response, the researchers compared specific genes used by immune system cells from the mice that breathed polluted air with the cells of those that breathed filtered air. They found higher levels of messenger RNA — the blueprints of DNA needed to make proteins — in the genes for interleukin 1b, interleukin 13, oncostatin M and eotaxin-1 in the nasal fluid of mice that breathed the polluted air. All those proteins are considered direct biomarkers for inflammation.

“Inflammation that attracts eosinophils is what happens in the lungs of people with asthma, so essentially the chronic exposure to air pollution in mice is leading to a kind of asthma of the nose,” says Ramanathan.

Next, the researchers examined layers of cells along the nasal passages and sinuses under a microscope and found that the surface layer – or epithelium – was, notably, 30 to 40 percent thicker in mice that breathed in polluted air than in those that breathed filtered air. Ramanathan says that a thicker epithelium is another sign of inflammation in humans and other animals.

The researchers next used glowing antibodies that bind to the proteins claudin-1 and E-cadherin found in between the cells of the epithelium to help hold them together. They report observing far less of both proteins but up to 80 percent less E-cadherin from mice that breathed in the polluted air compared with the mice that breathed filtered air.

The investigators also said they found much higher levels of the protein serum albumin in the mice that breathed in the polluted air. High levels of serum albumin indicate that barriers to the nasal passages and sinuses were breached.

“We’ve identified a lot of evidence that breathing in dirty air directly causes a breakdown in the integrity of the sinus and nasal air passages in mice,” says Ramanathan. “Keeping this barrier intact is essential for protecting the cells in the tissues from irritation or infection from other sources, including pollen or germs.”

Ramanathan says his team will continue to study the specific molecular changes that occur when the sinus and nasal barriers are breached because of air pollution, as well as investigate possible ways to repair them.

The study was funded by grants from the National Institute of Environmental Health Sciences (ES020859 and U01 ES026721) and the Flight Attendant Medical Research Institute.

London has a patient for treating vascular barrier dysfunction licensed to Navigen Pharmaceuticals, and he holds some stock with the company.