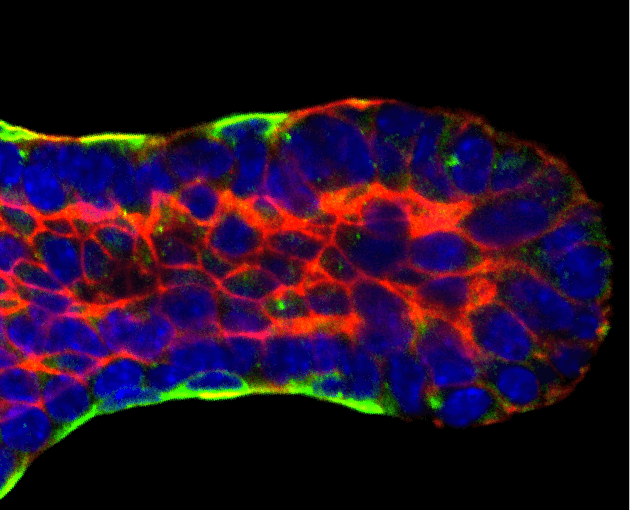 An image of a developing mammary duct. Credit: Andrew Ewald

Working with hundreds of time-lapse videos of mouse tissue, a team of biologists joined up with civil engineers to create what is believed to be the first 3D computer model to show precisely how the tiny tubes that funnel milk through the breasts of mammals form.

A report on the model was published April 9 in Developmental Cell. The model employed science and engineering principles commonly used to predict the forces at work on bridges and buildings and “miniaturize” them to use on cells.

Understanding how such ducts form, the team says, may lend insight into how diseases such as metastatic breast cancers spread throughout the body.

“We learned from this study that cancers would not need to ‘invent’ cell migration, but only reactivate dormant but normal duct migration programs in the wrong place and wrong time,” says Andrew Ewald, Ph.D., professor of cell biology at the Johns Hopkins University School of Medicine and a researcher at the Johns Hopkins Kimmel Cancer Center.  Ewald emphasizes that the computer model was created through observations of mouse tissue grown in the laboratory, but because mammalian biology is so highly conserved across species, the same processes are likely applicable to most or all mammals.

Ewald’s lab worked with a research team from the University of Waterloo in Canada led by Wayne Brodland, to build the model. The team compared how migrating cells interact with their neighbors and organize into “scaffolding,” to the systems of beams that support man-made structures.

“This was an interesting structural engineering problem to solve,” says Matthew Perrone, a civil engineering master’s student at the Johns Hopkins Whiting School of Engineering. “In addition to determining the forces acting within a finished duct that hold it together, we had to compute the forces that allow it to support itself while still developing.”

As the mouse mammary tissues grew breast milk ducts, the research team measured the angles between one cell border and the next and used this info to calculate the relative strength and direction of forces acting on the cells in these tissues.

“Imagine an invisible hand pulling on the net, in which the angles between all of the links change such that you can predict where the hand is and what it’s doing,” he says.

These angles change as a cell moves through a tissue, a process incited by chemical gradients within the cell. Using fluorescent molecules to mark these chemicals, the research team found the signaling proteins RAS, phosphatidylinositol 3-kinase and F-actin concentrate in the front of the cell and watched as these signals prompted the cell to change from a typical shapeless epithelial cell into a unique teardrop shape as they begin to move.

(To watch the above video, of a 3D model of developing breast milk ducts, click on the link.)

“After seeing this occur hundreds of times, we knew that shape must be important for the biology and the mechanics of the system,” says Neil Neumann, lead author on the study and an M.D./Ph.D. candidate at the Johns Hopkins University School of Medicine.

That shape, the researchers found, was a result of a pulling force at the front of the cell and a pushing force at the back – the same forces at work in single cells moving outside of tissues.

“Almost all of cell migration research over the past 50 years has been based on single cells that have been removed from a normal context and placed on a rigid surface such as a petri dish,” says Ewald. “Our results reassure us that our understanding of the forces at work on a simple system like a single cell can be applied to more complex environments.”

However, Ewald says, a major difference between a cell moving in isolation and one moving through complex living tissue is that for the latter, the cell needs to break and form connections with their neighbors in order to move to their destination.

Ewald’s team saw that the cells at the front of the elongating duct replicate to create layer after layer of daughter cells directly below them, like a ball slowly filling in from the outside. To elongate the duct, the cells from the lower layers begin to crawl their way up to the surface, expanding the surface area and the length of the duct.

With all of this information coded in, the initial model was still incomplete, creating structures that sprawled out in all directions, rather than growing directionally into a long, linear tube typical of healthy mammary ducts. “This failure told us that for normal tubes to form, we needed to be some other force at the edge of tubes,” Ewald says. Ultimately, the researchers found that the stationary cells in the tissue created fibers that fortify the cell’s shape. When the forces created by these fibers were added to the model, the tubes finally elongated.

(To watch the above video, of a 3D model of failed developing breast milk ducts, click on the link.)

“It is similar to blowing up a balloon inside of a paper tube. The rigid outer layer directs the expansion,” says Ewald.

The researchers say the computer model should enable more multidisciplinary studies showing how cells migrate in healthy organs and provide insight into how diseased cells, such as cancers, may use these processes to spread.

“An exciting part of this interdisciplinary work is that each side of the project informed and enhanced the work of the other,” says Neumann. “The experiments that we performed improved the computer model, and the results from the model gave us new insights into how the biology worked.”

Other researchers involved in this study include Robert Huebner, Huiwang Zhan and Peter Devreotes of the Johns Hopkins University School of Medicine and Jim Veldhuis of the University of Waterloo Department of Civil and Environmental Engineering.